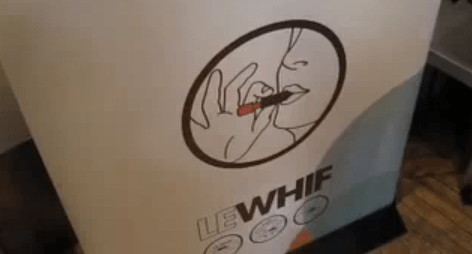 Because drinking or eating caffeine is too slow, and snorting caffeine is still frowned upon by polite society: a Harvard biomedical engineering professor, David A. Edwards, has just launched “Le Whif“, a line of chocolate and coffee products that you can consume just by breathing them in, nationwide.

Chocolate Le Whif sounds innocuous enough, if too good to be true: Switched writes that while it has the taste of chocolate, it’s a zero-calorie treat. The evil, yet more deeply intriguing, of the two Le Whifs, at least to us, has got to be the Coffee Le Whif. Forget the flavor of coffee: Each hit delivers 100 milligrams of caffeine — as much as a cup of espresso.

According to the Harvard Crimson, over the past nine months, Le Whif has sold more than 60,000 tubes, and its nationwide debut entails “producing roughly 100,000 tubes a week starting in April.” By far the most absurd pull quote in the article:

You can buy Le Whif in Chocolate, Raspberry Chocolate, and Mint Chocolate flavors at laboshop.fr; no Coffee flavor available there, sadly, as you’ll have to wait for it to hit stores (before it sells out, as it did within three hours after it was unveiled at Dylan’s Candy Bar in New York). Whether or not that’s a good idea is entirely up to your judgment

Below, the Cambridge Chronicle interviews the professor behind Le Whif, who teaches you how to inhale correctly.