Lawyers Weigh in on Han v Greedo, Because That’s Where We’re at as a Society

Who shot first. What shot second. 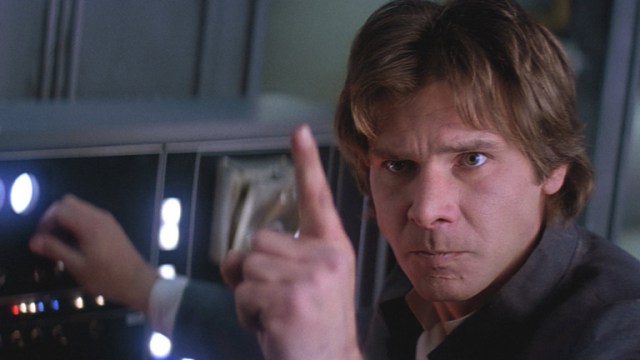 In the theatrical release of Star Wars, Han Solo was cornered by Greedo in the cantina and shot that overconfident green bug-person so he could escape. In retrospect, George Lucas felt that made Han look like kind of a murderer, so he changed it to make Greedo shoot and miss before Han fired, and the whole world went to Hell.

But it doesn’t have to be like this. We can all morally justify Han’s pre-edit actions until we’re blue in the face (from drinking blue milk, of course), but we all know what’s really important in a hive of scum and villainy is the letter of the law. According to The Legal Geeks, Han wouldn’t have been breaking any, as his shooting of Greedo would’ve fallen under an easy self defense argument (not just for fans, but also for a jury, apparently).

The whole thing hinges on whether Han had a “reasonable belief” that his actions were necessary to save his own life and whether or not he could safely retreat. California attorney Josh Gilliland writes,

Applying the facts to the Model Penal Code and Common Law, Han was justified in shooting first and killing Greedo. Without a doubt, having a blaster pointed directly at Han put his life in danger. Additionally, Greedo’s statement “That’s the idea. I’ve been looking forward to this for a long time,” communicated Greedo’s intent to kill Han. Shooting first was the only away to prevent Greedo from using deadly force himself.

As for the retreat issue, Han was already at gunpoint and cornered in the booth when Han shot Greedo. It is unlikely Han could have retreated with his back to the wall and in a seated position. Shooting his way out appeared to be his only option.

So there you have it. Years of fan arguments (really, has anyone been arguing the Greedo side of this aside from George Lucas?), the whole thing has finally been cleared up by a quick legal argument. Han’s great, and the law was actually on his side either way. Situation normal.

(via /Film, image via Lucasfilm)