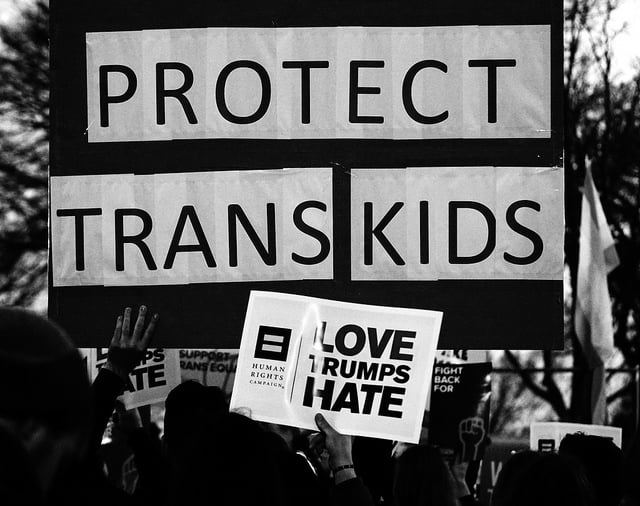 A family in Orange County, California has filed a lawsuit against their daughter’s private school, alleging that they discriminated against her for being transgender. In short, after learning about the child’s gender identity, Heritage Oak Private Education forced her to use the boys’ bathroom and required her to wear the boys’ uniform. Needless to say, the child, who is only seven years old, faced bullying because of the school’s decision, all of which went ignored, according to the suit filed by her parents.

The suit specifically cites the Unruh Civil Rights Act, which explicitly bans discrimination against students based on their race, sex, and gender identity in California. This case is especially notable because it’s one of the first cases in which this statewide act has been cited to protect a student based on their gender identity. Mark Rosenbaum, director of the pro bono Public Counsel Opportunity Under Law group explained as much to the LA Times. Rosenbaum said, “This is the first [transgender rights] case to use a state anti-discrimination law as one of the grounds for relief.” The group has taken the case on behalf of the child and her family, all of whom agree that such a case is a critical one in our current political climate. Rosenbaum went on to say, “In light of the Trump administration’s inaction on taking a stand against discrimination against trans individuals … this is a terribly important case.”

Right now, the child is currently being homeschooled by her parents. She was removed from Heritage Oak Private Education after she “tore a photograph of herself in half and cried out, ‘I hate myself,'” according to the filed complaint. As well, the LA Times mentions that the child “heard a report about suicide on the radio, according to the lawsuit. She asked her parents if she could ‘suicide herself’ because ‘life is really hard.'”

Seven years old, and she’s asking about suicide. I mean, come on.

The school responded to the parents’ complaint, essentially saying that they were just stalling to try to figure out how to go about telling the other students about the child’s gender identity. Kerry Owens, vice president at advertising firm MGH, expressed as much in a statement on behalf of the school, writing:

We believed it was extremely important to respond, not hastily, but with deliberate care, to decide when and how to inform and educate our entire elementary school community of students, staff and parents about the mid-year change of gender identity expression of a young child. Due to the sensitivity of the issue and age of the child, we believed we needed expert guidance regarding timing (such as, preparing children for a change they would see in spring semester of second grade and fall semester of third grade), process and age-appropriate communication.

The statement also explained that the school has met the needs of older transgender students, but this case just happened to be different because of her age. It also mentioned that the school tried to make accommodations and bring in an outside consultant, but “Unfortunately, these accommodations were rejected and the parents withdrew their child.” Regardless, Rosenbaum, contested that and said the school “created roadblocks and ultimately refused to meet the undisputed needs of a young transgender student in their care.”

Being unsure of how to break the news of a trans kid’s transition is no excuse for refusing to acknowledge said child’s gender identity. Making that child suffer because you aren’t equipped with the right language or tools to discuss such a matter is straight up wrong. You can’t ask somebody to wait on presenting themselves long after they’ve already come to this decision—a decision that usually comes at the hands of much pain and heartbreak. Forcing a trans child into the uniform and bathroom that doesn’t match their gender just inflicts undue punishment on that child. It’s unfair in just so many ways to ask that kid to essentially wait to be themselves all because they weren’t ready to explain it to kids. That’s a failure of the school, not the child.

As I so depressingly share every time stories like this break, self-harm and suicidal thoughts and ideation run rampant amongst transgender people, who are often made to feel like their lives are somehow worth less than those of cis people. According to a 2016 study by the Cincinnati Children’s Medical Center, 30% of transgender youth report having attempted suicide at least once, and 42% of trans youth report engaging in self-harm. The Trevor Project, which runs a suicide hotline to help LGBTQIA teens, also reported a major spike in calls and cases since Trump’s recent tweets regarding his intention to ban trans soldiers from serving in the military. In a blog post earlier this month, they wrote:

Of the approximately 178 contacts per day (on average) received by The Trevor Project, 7.3 percent typically self-identify as transgender. However, within 24 hours after President Trump’s tweet regarding transgender military service members, contacts from transgender individuals spiked to 17.5 percent of all contacts. Furthermore, in the week after the Texas legislature introduced the anti-trans “bathroom bill,” contacts from transgender young people doubled to 14.7 percent.

It sickens me that a kid as young as seven years old was pushed to the point of considering suicide because a school couldn’t get their shit together enough to recognize that they were endangering a child’s life. It truly makes me ill to think that this case isn’t unique, that she represents the struggles of many trans kids across the country who are othered by the very institutions that are required to protect them. What’s especially painful is knowing that these schools really think they did everything in their power to help, when they in fact have done nothing but harm these children.

It breaks my god damned heart that people can’t get their shit together enough to protect actual children.

That’s the real tragedy here. Kids like this one aren’t seen as kids anymore by these folks determined to perpetuate marginalization. They’re a talking point, a statistic, a number, a check box on a form. She was made to be something to be dealt with and discussed, when in fact she’s a child, someone with feelings that deserve to be recognized, validated, and celebrated. That, at the end of the day, is where the school and its administration failed. They stopped looking at their students as people, and they started looking at them as issues.

And if dehumanizing kids doesn’t break your heart, then I don’t know what else to say to you.