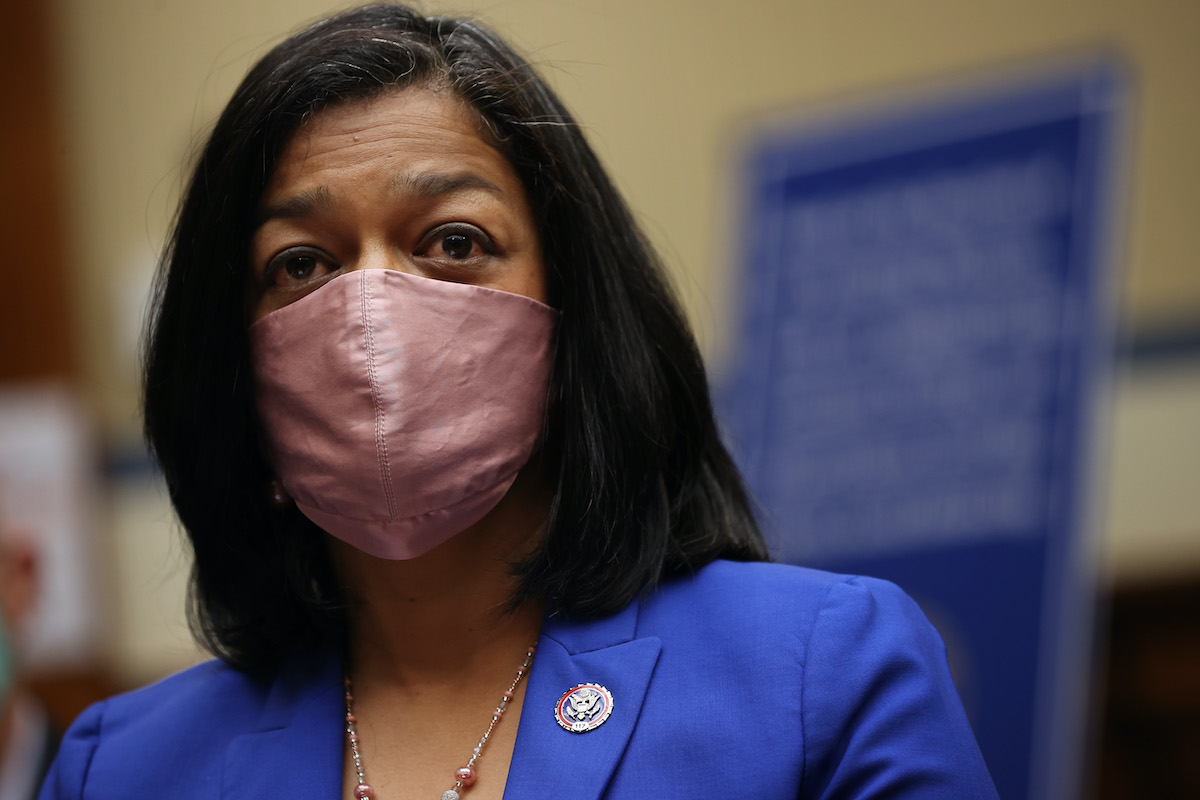 The House Oversight Committee met Thursday morning to “examine the threat to abortion rights and access posed by extreme anti-choice state governments and a Supreme Court that is hostile to reproductive rights,” accurately calling the state of abortion in America a “state of crisis.”

During the hearing, a number of lawmakers spoke about not just the state of abortion access, but their own personal experience with abortion. Three Democratic representatives—Cori Bush (MO), Pramila Jayapal (WA), and Barbara Lee (CA)—shared their abortion stories in testimony given from the House floor.

“Tomorrow, I will share a story that I’ve never fully told publicly before,” Bush tweeted Wednesday. “I am testifying at the Oversight Committee hearing on abortion care and I will share that when I was 17, I was raped, became pregnant, and got an abortion. And I am not ashamed.”

Tomorrow, I will share a story that I’ve never fully told publicly before.

I am testifying at the Oversight Committee hearing on abortion care and I will share that when I was 17, I was raped, became pregnant, and got an abortion.

She shared that message along with a link to a Vanity Fair profile in which she details parts of her story, which involved being sexually assaulted during a church trip just after having graduated high school. She describes the expensive, degrading process of seeking an abortion, which involved being swarmed by protesters and shamed by racist medical professionals.

“Choosing to have an abortion was the hardest decision I had ever made but at 18 years old, I knew it was the right decision for me,” Bush said during Thursday’s hearing. “It was freeing knowing I had options. Even still, it took long for me to feel like me again until most recently, when I decided to give this speech.”

“To all the Black women and girls who have had abortions and who will have abortions: We have nothing to be ashamed of,” she continued. “We live in a society that has failed to legislate love and justice for us. We deserve better, we demand better, we are worthy of better. That’s why I’m here to tell my story.”

Rep. Jayapal also shared her abortion story, which she says began earlier, with the birth of her first child, Janak. Janak was born premature after an incredibly difficult pregnancy. At birth, Janak was “so small, they fit in the palm of my hand, the size of a medium-sized squash,” Jayapal said Thursday. She also described her struggles with postpartum depression, which left her contemplating suicide before finally receiving professional help.

Jayapal divorced and later remarried the man who is still her husband today. She says she knew she didn’t want another child but despite “religiously” taking her daily contraceptive pill, she became pregnant. Her doctors told her she was likely to have a difficult and dangerous pregnancy similar to her first. “I wanted to have more children but I simply could not imagine going through that again,” she said.

Jayapal never spoke publicly about her abortion until two years ago. “As an immigrant from a culture that deeply values children, and in an American society that still stigmatizes abortion, suicide, and mental health needs, I felt shame that I never should have felt.” She finally spoke out because she was “so deeply concerned about the abortion ban legislation that was coming out from states across the country.”

“Today, I am testifying before you because I want you to know that there are so many different situations that people face in making these choices. Whether the choice to have an abortion is easy or hard, whether there are traumatic situations or not, none of that should be the issue. It is simply nobody’s business what choices we as pregnant people make about our own bodies.”

The third lawmaker to share her story was Rep. Barbara Lee, who, as a teenager in the 1960s, living in a pre-Roe America, was forced to seek a “back-alley” abortion in Mexico. This was the first time she’d spoken about her abortion publicly, and she said she did so in hopes of destigmatizing abortion care.

“I am sharing my story even though I truly believe it is personal and really nobody’s business, and certainly not the business of politicians,” she said.

“As co-chair of the pro-choice caucus, as a Black woman, a woman born in Texas, these state-level abortion bans like Texas’ SB 8 are deadly. I know what this means for Black people and brown people and people with low incomes,” she told the committee.

Growing up in El Paso, Texas (and later moving to California), attending Catholic school in the 1960s, Lee says sex education was “non-existent.” Lee came of age at a time when the advice girls and women received about sex was pretty much explicitly limited to “stay away from boys.” They were told that if they missed their period, they were told to “take quinine pills, sit in a tub of water, or use a coat hanger if nothing else worked.”

Lee ended up telling her mother she had missed her period and fortunately, her mother responded with support and understanding, taking her daughter to a doctor and asking her what she wanted to do. A family friend back in El Paso helped Lee find a trusted doctor in Mexico to receive the care she could not get in the U.S.

“I was one of the lucky ones,” Lee says, noting that in the 1960s, “unsafe, septic abortions were the primary killer–primary killer–of African American women.”

“My personal experiences shaped my beliefs to fight for people’s reproductive freedom,” she says. It shaped her work in politics, from fighting for legislation to punish those blocking abortion access, to making sure young people had access to the kind of comprehensive sex education she never had growing up.

In addition to these three incredible women who shared their own personal stories, other experts gave their own testimony during Thursday’s hearing, including Gloria Steinem, who spoke about the fundamental need for bodily autonomy.

A Texas-based OBGYN named Dr. Ghazaleh Moayedi also spoke about her experience as an abortion provider living and working in an extremely anti-abortion state. Her testimony was heartbreaking and infuriating.

.@dr_moayedi is then forced to make her patients wait 24 hours before actually having their abortions, even though waiting is medically unnecessary &, as she said, “goes against my better judgment as a physician.”

Meanwhile, there were a few anti-abortion testimonies during the hearing.  They were a maddening waste of time and came from people like Republican Rep. Kat Cammack, whose entire argument seemed to be “I’m against abortion because my mother chose to give birth to me.”

Cammack spoke right after Rep. Jayapal, and she obviously could have benefitted from listening to her colleague. As Jayapal said during her testimony, “Let me be clear, I would never tell people who don’t choose to have an abortion that they should do so. Nor should they tell me that I shouldn’t. This is a constitutionally protected, intensely personal choice.”