Late To The Game: Puzzling Portal 2 For The First Time | The Mary Sue

Late To The Game: Puzzling Through Portal 2 For The First Time

So much Sassy Wheatley! 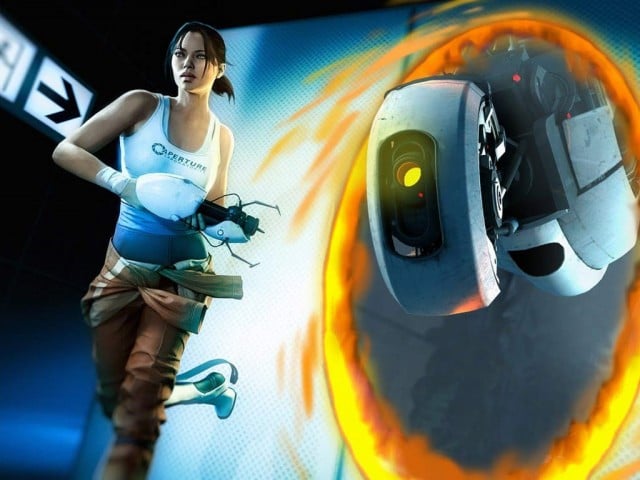 Welcome to new(ish) series Late to the Game, where Sarah Ingram of The Geekmates reviews games that she’s shamefully left unplayed up to this point. It’s like newbie recaps, but not. Scroll to the bottom for a few options as to what you can peer pressure Sarah into playing next.

Next up on my shameful, shameful catch up of games I didn’t play is Portal 2, chosen by you, dear readers and best of friends – and can I just say you have not disappointed me so far. But I have very much disappointed myself – what honestly took me so long?!

I had played the co-op with Husband Man a while ago, because we wanted something to play together on stay-in date nights, so I kinda knew what I was getting myself into. I had a pretty okay idea of how the portals worked (even though Tony is a genius on solving things and I just happily followed instructions). 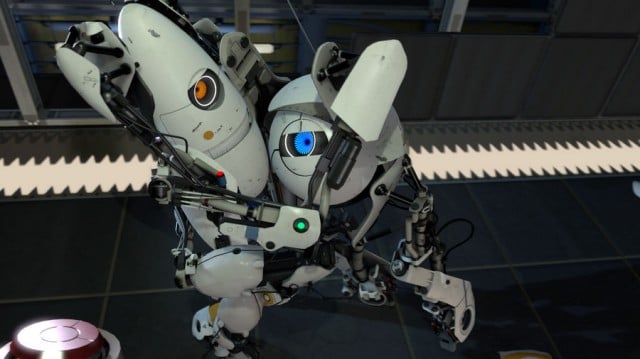 But this … this is a WAYYYY different feeling.

It starts off pretty creepy, and for a minute I was afraid I had been lured into playing a scary something-or-other (which was NOT happening). I woke up a couple times in a weird room with no windows and counters, and then the last time there was this whole 9, 9, 9, 9, 9, 9, 9 creepy counting thing going on ….. aaahhhhhh and the room is a mess – seriously please tell me this is not a scary game.

As soon as Wheatley popped into my room I felt a lot better – I love a nice witty character with sauciness to break the tension, and that was exactly what I got. This really helped me out later too, when I was in the creepy basement area with creaky doors, but I had GLaDOS and Wheatley to make me giggle (even when they were trying to kill me). Wheatley was so super helpful with my “very minor case of serious brain damage” and teaching me how to jump apples, and is especially hilarious if you don’t leave the room when he tells you to run. I stood there for a couple minutes and giggled a whole bunch. I am definitely right away in love with this robot. Wheatley is super funny and snarky and sassy and I want to have him in my house all the time to narrate my life.

They pretty much throw you in to the actual stuff right away, and I have literally no idea who I am besides a quick glance in a reflection that I’m a woman, which is pretty darn cool. It’s not a big deal, it’s not the focus, it’s just a thing, and it has no effect on the game otherwise. LOVE IT! The puzzles SO FAR are not too hard; although I wonder how much trouble I’d be having if I hadn’t played a bunch of the co-op with Husband Man before. Even still, he is the puzzle solver, so the fact I have gotten though 6 or so without resorting to the internet makes me feel pretty darn smart. Who said a graduate degree was useless?

Near the end of our great escape we accidentally turned every switch on looking for an escape pod (oops) and then awake the “she” Wheatley was so afraid of: GLaDOS! andddd apparently I killed her?

Trapped again… I have no idea what I did to GLaDOS, but I can’t wait to find out.

“I think we can put our differences behind us. for science. you monster.” #latetothegame — ScaraTopz (@Cerajoy) October 13, 2014

So GLaDOS is not fucking around with trying to trap/maybe kill me in here. Her puzzles keep getting harder and OH MAN am I cheating! I feel bad, I really do, but I just had to. I really have no patience, and after so many different attempts I can’t help but retreat to the easiness of the internet. I can definitely see how this would be a game that I would 100% walk away from if it wasn’t for you guys, but the challenge of the puzzles and thinking about the physics and patterns is something that makes Portal 2 so different, and so awesome, and a definite must-play. But yeah I totally FAQ’d like there was no tomorrow: much shame.

I still have no idea who I am. By the end of Chapter 2 and I’m really getting the hang of it – I’m not even cheating as much! (Oh my god, she can learn)! I’ve been missing Wheatley but then suddenly he’s back, hiding in the rafters. I seriously love the writing in this game – every jump to a new area or segue is different, and it feels real and organic, not scripted, matched with the perfect amount of sarcasm. YESSSSSS.

Yup, she definitely called me a blimp. You monster.

Into Chapter 3 and I’m finally figuring out the puzzles much better on my own. At first I was almost afraid to fail or experiment, but now that I’m getting into it and better understanding the behavior, everything is making more sense. GLaDOS has also mentioned vaguely about my parents also being here a couple times so there’s that to look forward to.

IS IT LOOK AT HOW ADORABLE

I am now into Chapter 4 and I am making my escape, and even though there are like no dudes to fight or any actual urgency, Wheatley and the music make me anxious to do it quickly. There is nothing urgent about what I’m doing, but the pacing makes it feel that way, and I frigging love the tension it’s causing. Also I was a good listener and the completionist in me tried to do the last puzzle, but GLaDOS gassed me. Rats. (Got a trophy though, heyyyyyy!)

WE’RE ESCAPING! RUN AWAYYYYYYY!! I frigged around with the turrets (and omg I love the “defective” ones, they are actually the absolute best thing ever), shut down the gas and then – GLaDOS lair time! I honestly didn’t know what was going to happen – having a “boss fight” in a puzzle game seems hard to wrap your head around – but we faced her, and we did it, and we’re getting out! Honestly there wasn’t much to do (at least not compared to LATER, god) but yay we are almost free! Wheatley and I will soon be starring in our very own 3 season sitcom.

And then … my dearest Wheatley was corrupted. I can’t believe it/totally can because an hour-long game wouldn’t really fly, but I am heartbroken about it a little. He was so sweet and was my little buddy and we were gonna be a big TV hit. It makes me think back to Saren from my last game, honestly. The promise of power warped his mind so quickly, and now he has betrayed me and I am falling down a hole with a GLaDOS potato. Where did this potato even come from? Things sure have changed.

oh poor sweet Wheatley, what have you become?! #latetothegame

So I have now fallen into the “pit”. I have no idea where GLaDOS or Wheatley are, and I have no idea where I am for that matter. This area looks totally different with a 1950’s voice and I swear to god if anything pops out at me I’m going to lose it. The whole underground-basement-1950’s thing is super creepy and weird, and I have this sinking suspicion that GLaDOS is this Caroline missus in the photo that this Anderson dude keeps talking about in the recordings. My hunch. Also I guess GLaDOS and I are buddies now? I mean I love potatoes but she seems a little half baked for me (hahahahahaah oh god I’m sorry). 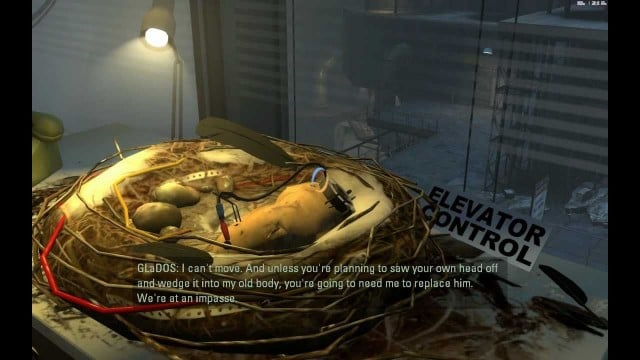 “what does a neckbeard know about fashion”. dead on, glados, dead on. #latetothegame — ScaraTopz (@Cerajoy) October 23, 2014

So I’m pretty sure Wheatley wants to kill me. He hasn’t explicitly said it yet, but he is not impressed with me trying to escape, hates GLaDOS who I am now friends with I guess, and is not getting his rocks off on me puzzle solving like he should. I read (while I was of course cheating) that there was a trophy for smashing all his monitors, and I had a ton of fun doing that and listening to his little sarcastic remarks. My personal favorite: “there are test subjects in Africa who don’t even have monitors in their test chambers” (guilt trip a la Mom in 1991) and when he calls me “little miss smashy smash.” He’s so cute!

I was not looking forward to the boss fight tbh, mostly because I was afraid it would rely heavily on timing and I would mess it up a bunch and get super mad – but it wasn’t! It was cool! I got through my three rounds as per usual of every boss fight trope ever, bombing Wheatley with portals and laughing out loud at some of the things those little replacement sphere dudes were saying, like the one that was super all about space —

And that moon shot? WOAH NELLY that was crazy, although I’m pretty sure that I shot the wrong color up there but the game was all like “whatever” and let it happen. What a weird ending! I miss Wheatley though. He was a good boy. I got potato GLaDOS all up in there and was pretty sure she was going to send me for new tests but – NOPE! Sweet, sweet freedom instead.

…. what are these turrets doing …. #latetothegame

Seriously that turret dance was too too good.

I overall was super impressed with Portal 2. I love that it was an intense puzzle game, and had those moments of panic and urgency but without there being any need for actual combat. It was refreshing, really – I love my turn-based JRPG’s and hacky/slashy pew pew games, but every now and then it’s really good to try something different. I died at some of the trophy pops: “You Made Your Point” when you refuse to do Wheatley’s first puzzle, and then of course there was “Pit Boss” – I literally laughed out loud at that, mostly because I slipped and fell down there accidentally in a panic trying to get away, and then there was that. Absolutely perfect timing.

My one big question though – what happened to my parents? Did I miss something?

Now I need you to make a choice for me! As usual I will carry over the leftovers from last time to this week! You haven’t failed me yet, lovely friends, my controller is in your hands!

I need you to make a good choice. That’s what I’m counting on.

Sarah Ingram is part archaeologist, part geek, and mostly runs on coffee and red wine. She is a historical archaeologist obsessed with seventeenth-century colonial taverns and social interaction; hosts a technology news and reviews show calledTech Up; and podcasts on The PVP Podcast. You can follow her on Twitter (@Cerajoy) if you enjoy a lot of Futurama quotes, wine musings, and Sony fangirling.

Previously in Late to the Game