Late To the Game: Relive The Joy and Trauma of Playing Dragon Age: Origins For the First Time 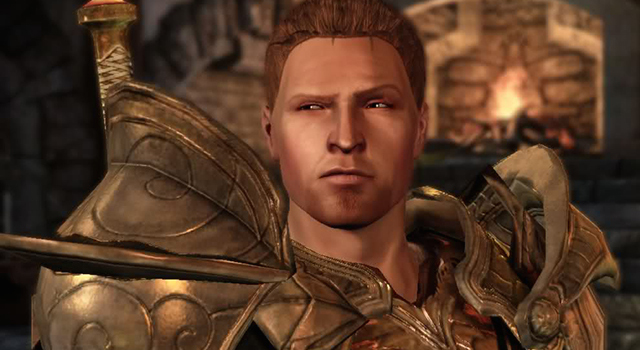 Welcome to new series Late to the Game, where Sarah Ingram will review games that she’s shamefully (shamefully, I say) left unplayed up to this point. It’s like newbie recaps, but not. First up is Dragon Age: Origins, her review of which was originally published on The Geekmates and has been reposted in its altered form with permission. Scroll down below the review to see options for what she can review next. Mass Effect, Sarah? How do you live with yourself?!

Like just about every other person on the planet that plays video games, I have *cough* accidentally collected more than I have actually finished. Or played. Or perhaps opened. (I can see three from here). Sometimes it happens because my “real life” gets in the way, or a new game came out that I got distracted with, or I bought way too many during an “I can’t turn this down” sale.

However I got here, it means that there are some games—truly remarkable ones, too—that I never played. And the only way I think I will finally get through some of them is if I publicly shame myself and have a bunch of internet friends and strangers tell me what I’ve been missing. I started with Dragon Age: Origins because—YES, I KNOW!—who am I and where have I been.

This is mostly screenshots of Twitter. You’ve been forewarned.

I don’t know what took me so long to get around to playing Dragon Age. I have been told by literally a dozen people that I would love it; I bought all of them; I friggin’ love dragons and axe fighting and armour; but I just never got around to starting one of them. Foolish, I know. 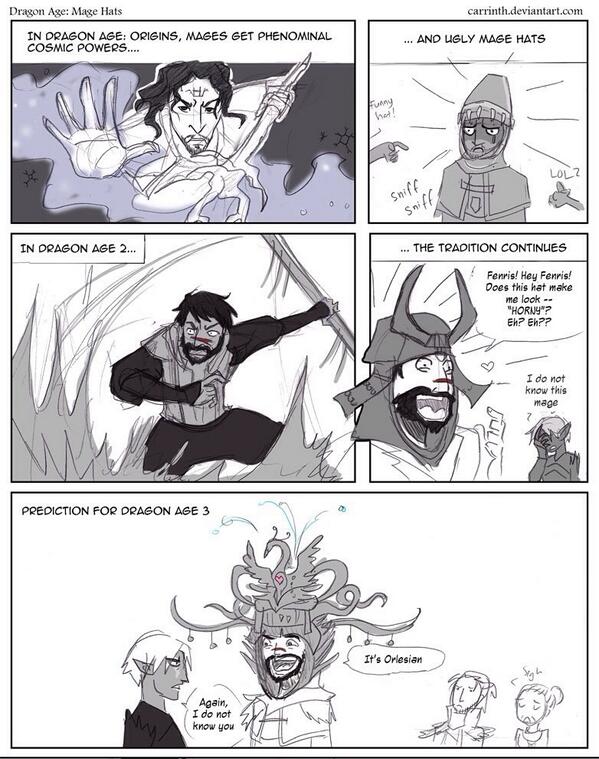 I promised [my friend] Dave that eventually I would play through all the games, and with no job and my thesis pretty much out of the way, it was time.

In typical form, I decided to be an Elf. I went Dalish, because fuck being a servant/slave, dude; and chose a warrior, which is something I learned through playing Dungeons and Dragons—I love to swing an axe around. I named her Avra, which is my go-to fantasy Elf name, and gave her super cool face markings and shaved her head. I originally went bald because most of the choices were not my favourite, and then I really fell in love with how badass it made me feel playing her. 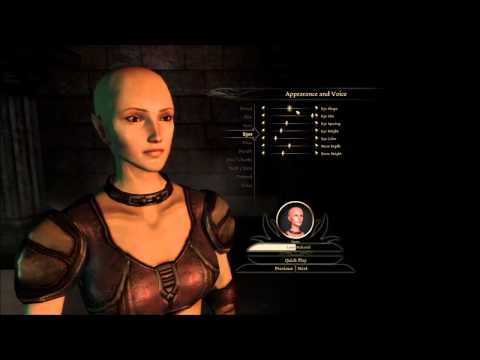 Pretty much this, with super pointy ears and all-over face markings of pure coolness.

And off I went. I got really into it and played over 10 hours my first day. The story is exactly the type of thing I like; the conversation choices made me feel like I got to react in ways Avra would, and the combat is the hack and slash type of stuff that I dig. No muss, no fuss. The people you met along the way all felt really developed and fleshed out, and I just got it. It was right up my alley.

I made my first big mistake in the first big town I ended up in, when I met this dude in a cage named Sten. At this point I didn’t really realize how much your decisions could effect the rest of the game, and I still didn’t find out what I’d done until it was too late. I saw him in the cage, tried to get him out, and pissed off the chantry mother (and Alistair in the process). So I left him. Oops.

The Circle of Magi was my next stop, to deal with the problem child of Redcliffe. And holy shit the Fade. I had no idea what I was at. I loved getting the backstories of my companions and definitely want to go through again with others to see their stories. Morrigan was by far my favourite. She is the sauciest. 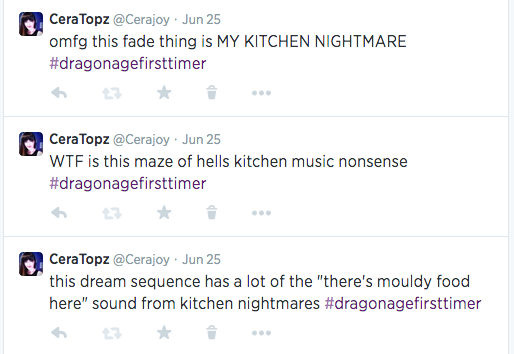 You know the sound …

I finally got through it, and after 10 hours my first day was done. I knew at this point I was hooked.

It was also around this point that I could tell that Alistair wanted a piece. I made a lot of my decisions in conversations based on my Dalish background, except when it came to him. With Alistair, everything was “whichever choice is most likely to lead me to sex with him.”

It also took me forever to realize you could go to camp and talk to them. But once I found that, oh man. 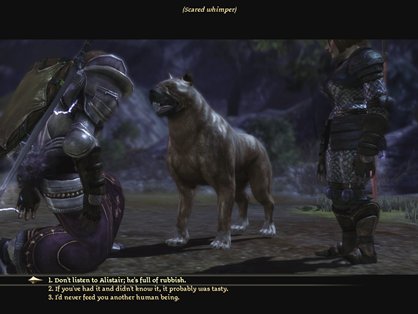 Thesis slowed my progress after that point, but, bit by bit, I made my way through to Denerim; the forests; helping werewolves; getting dead peoples ashes from secret underground places; and accidentally hitting gongs that summon high dragons to blow me to smithereens. I absolutely love having Shale with me. She’s so cool (even though she refuses to use my preferred pronouns), and Oghren is so saucy and hilarious. I honestly could talk about all my experiences for pages and pages, but I’ll sum it up in some of the tweeters I thought were worth sharing : ) 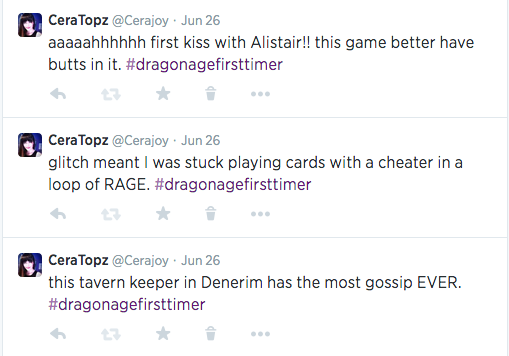 He was being illogical.

Everyone died, and I had zero health potions. I had like 2 healths left. Awesome.

PS: It totes was. 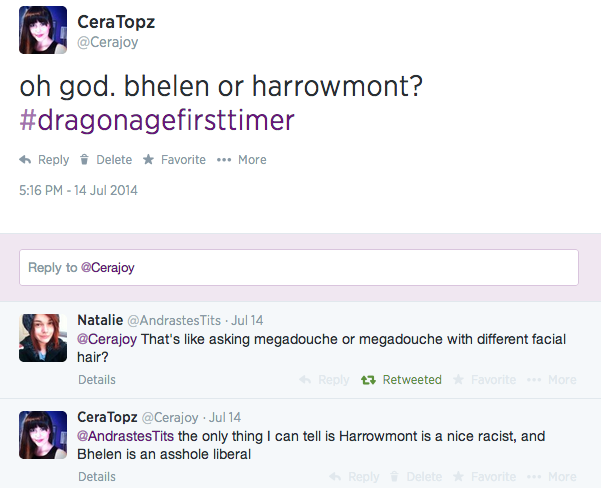 The DA equivalent of T-bagging in Halo.

I knew that I was getting close to the end when I was finally at the Landsmeet, so I set aside a whole day to get through it. And good thing I did, because I made all the wrong choices. One thing I die for is actual decision making in games, and having your choices really effect the outcome is super cool. Unless, of course, your decisions mean that you lose everything you have worked for and lose the sexiest of butts. 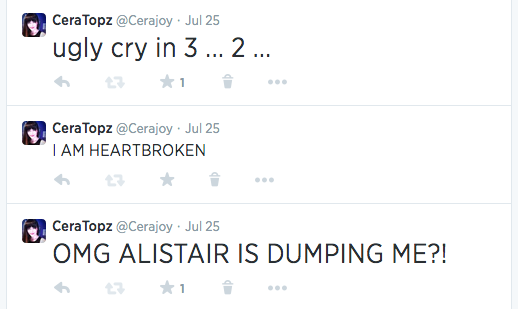 I actually cried. I am way too attached. 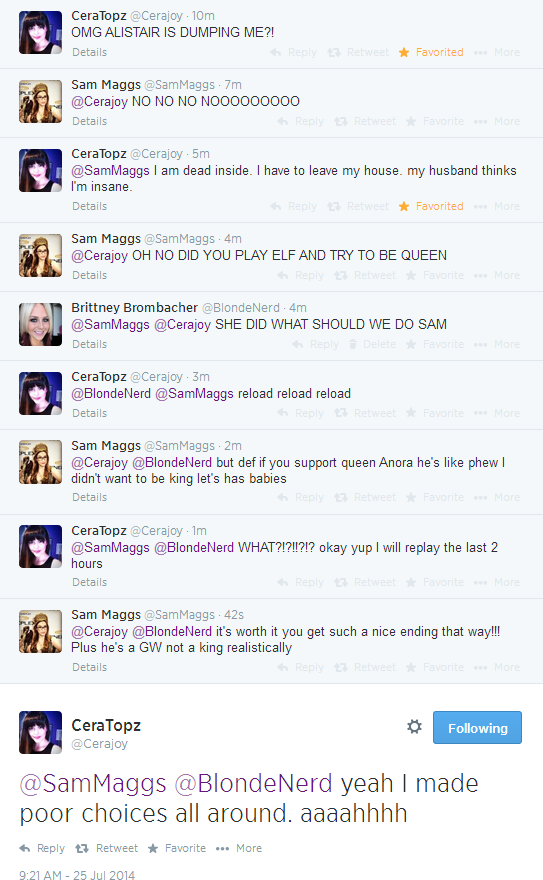 THANK THE MAKER for these two.

And then, after all this turmoil and heartbreak, the biggest, most intense battle to end all battles. Of course, I led everyone to victory and Alistair and I lived happily ever after.

PS. Special shout out thank you to my fellow Alistair lovers Sam [Editor’s Note: TMS writer cameo for Sam Maggs, WOOOOOOO!] and Britt for helping me through some of my awful decisions, and also to Ness and Dave for constantly shaming me for killing off Sten.

Now, this is where you come in! I need help catching up on this huge backlog of games, and I have no idea where to start. So I’m gonna choose a few from the list and ask you to help shame me into which one is the worst “OMG I can’t believe you haven’t played that yet!??!” title.

I know. These are awful. I am so ashamed. If only you knew what else was back there.

Sarah Ingram is part archaeologist, part geek, and mostly runs on coffee and red wine. She is a historical archaeologist obsessed with seventeenth-century colonial taverns and social interaction; hosts a technology news and reviews show called Tech Up; and podcasts on The PVP Podcast. You can follow her on Twitter (@Cerajoy) if you enjoy a lot of Futurama quotes, wine musings, and Sony fangirling.