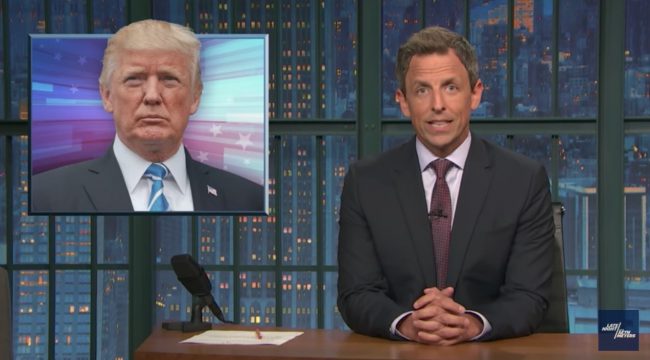 Yesterday, Trump made the decision to rescind the Deferred Action for Childhood Arrivals program, a cruel decision that attacks 800,000 children of immigrants. This action has almost no justification beyond his continued racist demonization of immigrants and efforts to undo anything and everything accomplished during the Obama administration.

The decision was immediately met with protest and criticism, from the internet to Obama who released a statement calling the decision one that was absent of any legal requirement, but “a political decision, and a moral question.” He wrote, “To target these young people is wrong – because they have done nothing wrong. It is self-defeating—because they want to start new businesses, staff our labs, serve in our military, and otherwise contribute to the country we love.”

Late night responded similarly yesterday, condemning Trump for his attack on 800,000 young adults, cowardly execution that consisted of a lukewarm statement and hiding behind Jeff Sessions, and blatant hypocrisy as he made several promises to protect DREAMers.

James Corden begins his segment on The Late Late Show with a few shots at Trump’s unhappy marriage and the hypocrisy when we consider Melania was previously undocumented. Those who were protected under DACA are still dreamers, the host notes, but in more of a “Nightmare on Elm Street way.” Hey, if the number of states suing you is greater than zero, maybe you’re not doing a stellar job?

Best line: “It looks like Trump could be deporting hundreds of thousands and immigrants which is a real faux pas on Trump’s part because everyone knows you’re not supposed to wear your white supremacy on labor day.”

The Late Show with Stephen Colbert went through the fact that in a moment of terrible natural disasters devastating the United States, Trump’s priority was somehow to create his own man-made disaster. Colbert notes that getting rid of DACA is a hugely unpopular decision on both sides, and was likely to be unwelcome so “Trump bravely steeped up, then cringed back, and had somebody else announce it,” A.K.A. “turnip that learned to hate Jeff Sessions.”

The host says, “You’re right Jeff, deporting innocent children does not mean they’re bad people. It means you’re a bad person.” That DACA hot potato then went to Sarah Huckabee Sanders who stumbled over her notes. Colbert also goes through the economic hit the United States will take, and the well known saying, “If you love something, set it free, then lock the door until it’s gone.”

Best line: [In a Trump impression] “I do not favor punishing children…that’s why all my children are spoiled monsters, ok? Sociopaths.”

“It seems like his main agenda is just to undo everything Obama did. I hope he doesn’t bring Bin Laden back to life,” says the Jimmy Kimmel Live! host. Kimmel’s segment was relatively brief, and leads up to a mock PSA about how the Trump kids were born to an immigrant mother and can’t help being related to their terrible father. I think it’s supposed to point out the absurdity of Trump’s logic, but it sort of falls apart when you look at it too closely. (Does the premise rely on immigrant parents being the equivalent of Trump? There’s already so much branding that wants to paint the Trump kids as innocent, separate, and naive—is this really the best idea?)

Best line: On the “surprise” that Trump had reassured those covered by DACA that they would be safe, Kimmel says, “It’s like when Dracula tells you to relax and take off your scarf.”

Late Night with Seth Meyers continue to establish itself as one of the best late night shows tackling politics today, as Meyers dives into both DACA and Trump’s response to Hurricane Harvey in “A Closer Look.”

After pointing out how Trump doesn’t know how to load a truck, nor how to give to a statement that inspires and reassures a nation in the face of a natural disaster, Meyers transitions into DACA news by talking about brave emergency responders like paramedic Jesus Contreras, who spent six straight days working to help people in Houston. Contreras was one of the 800,000 protected from deportation during DACA. By putting his story next to Trump’s horrendous Houston appearances where he attempts to muster up a shred of humanity from his broken empty soul, it becomes evident how little the President truly cares for this nation. Clips from 1/26/17, 9/1/17, and 2/16/17 of him reassuring DREAMers are more telling than any commentary.

Best line: On Congressman Duncan Hunter justifying his Trump support by saying, “He’s an asshole, but he’s our asshole,” Meyers looks into the camera at the end of his statement and simply says, “Congressman, there is something wrong with your asshole.”

Jake Tapper, whose job these days seems to be assuring the nation that no, you’re not hallucinating this is definitely not normal, appeared as a guest on the show as well. The journalist spoke briefly about DACA, and the disparaging fact that Trump doesn’t appear to know exactly what his promises mean, nor the implications of them. A very serious and devastating fact, Tapper points out, is that DREAMers will become even more vulnerable because they’ve given over much of their personal information—their addresses, etc.—during the DACA application process.

If you think removing DACA is anything but a senseless, dehumanizing, and cruel act from a cruel and inhuman man, read some of the accounts that are coming out from DREAMers bravely sharing their stories. More importantly, let’s also interrogate the way we talk about immigrants and their place in our nation. Immigrants aren’t worth fighting for simply because of their economic contributions and the benefits they bring us. They are valuable because they are human beings who deserve to be treated like people.