Shark Gets Outfitted With Laser Pointer for “Science” 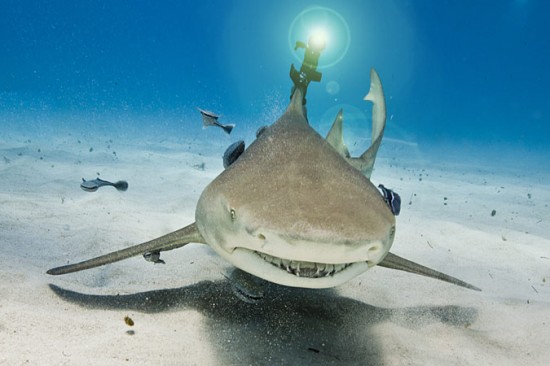 The last time we saw Wicked Lasers, the makers of high-end and ridiculous lighting and laser-pointing devices, they were making an iPad explode with a flashlight. This time, they took their antics under the sea, and attached a S3 Krypton green laser to a lemon shark. For science, or something.

The act of actually attaching the laser was handled by marine biologist, photographer, and media producer Luke Tipple. The lemon sharks, which are known too be fairly docile swimmers and hang out in shallow waters, were drawn in with some bits of fish and one lucky fellow had a the laser attached to its dorsal fin with a non-invasive clip.

Tipple says that equipping the shark with a laser was more than just fun — though I am hard-pressed to believe him. He says, it showed off a non-invasive form of shark tagging. When researchers tag sharks, either for identification or to cary electronic hardware, it’s sometimes done by piercing a fin. Tipple’s clip used gel pads to grip the shark, and even has a zinc spring designed to degrade in salt water and eventually fall off.

On his website, Tipple goes on to describe a number theories that this stunt apparently tested. He says that some companies claim that sharks are repelled by lasers — which he found to not be the case. Instead, the predatory fish appeared attracted to the bright beams. Tipple also says that attaching a laser could be used to measure body position, and how the animals react to various stimuli.

Of course, Tipple is free to say whatever he likes, but his claims that this was anything other than a publicity stunt by Wicked Lasers is pathetic. He and his media production company What We Do Media were paid to make a video about sharks with lasers on them — cashing in decades late on Austin Powers. Tipple even refers to the shark as “Mr. Bigglesworth” — yawn.

Here’s how Tipple describes working on the project:

My first thought was, um… no. There’s really no reason to do it and it was obviously just a publicity stunt. However after talking to the companies owner and establishing that he actually has a deep affection for sharks I asked him if we might take a different, perhaps slightly more scientific approach to the suggested stunt. He agreed and the redefined mission was on. I would test a non-invasive attachment method and I’d also send the company footage of his laser in return for funding the research. A pretty fair trade in my books.

While the non-invasive clip is, perhaps, of some use to researchers, the shark was only clipped for 15 minutes or so. Tipple says that the clip could be used for temporary tagging, but 15 minutes doesn’t really seem like enough time to prove anything. It also makes me wonder how much Tipple thought he could learn about shark posturing in those 15 minutes.

As an ad, I have no problem with this at all — Tipple clearly cares about these animals, and the result is fine for what it is. When he claims that this was about anything other than a job is what I take issue with.

Let’s call it what it is, folks. Its an ad, not science.