Land of the Lustrous Is Much, Much More Than “Anime Steven Universe“ 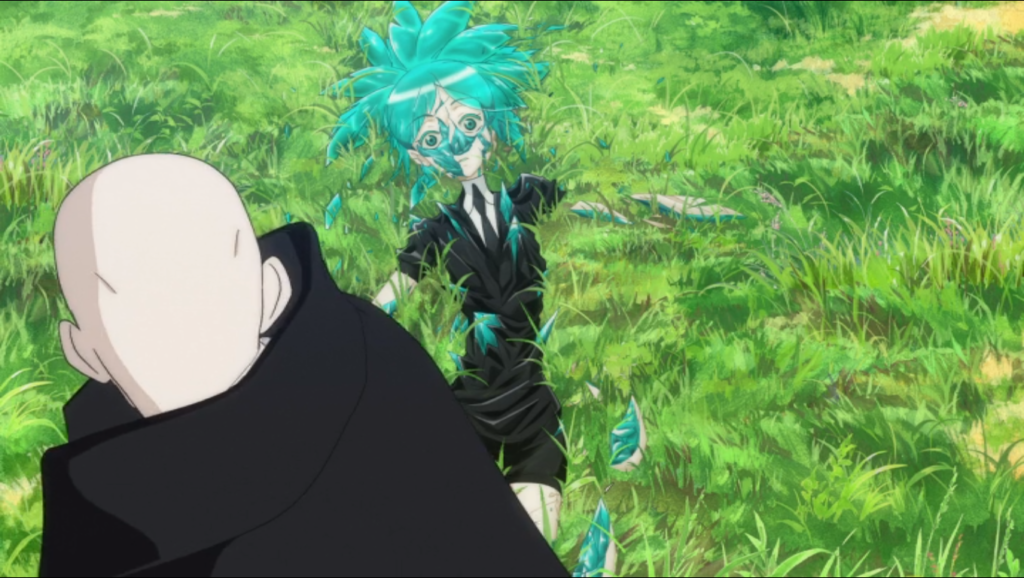 As of 2017, we now officially have two series about sentient, queer rocks. But while there have been too many variants on “Land of the Lustrous is anime Steven Universe” to count, the similarities more or less end with the basic premise. LoL’s rocks are not small gems with manifested forms made of light, but actual bodies made out of rock whose ability to take a hit is influenced by the Moh’s Hardness Scale; and while both touch on the issues of societies mired in stasis, their world-building is wholly different. And finally, both series were in production in 2012, making it a true coincidence, at least on a conceptual level.

Land of the Lustrous’ story is a deceptively simple one: on some unknown planet that may or may not be a post-human Earth, 28 humanoid gem people—the titular lustrous—live together with their teacher, an enormous monk-like person named Kongo. Their lives are peaceful, barring attacks from the Lunarians, who harvest gem bodies for jewelry. Every gem has an assigned role except for Phosphophyllite, whose easily-cracked body makes most work unsuitable for them.

Phos is charged with creating an encyclopedia of the gems’ world, and in (reluctantly) doing so runs across the self-exiled Cinnabar, whose body exudes a dangerous poison. Cinnabar saves Phos from the moon people, in the process revealing that their body is even more fragile than Phos’. Drawn to this fellow outsider, Phos swears they’ll think of a job that only Cinnabar can do. 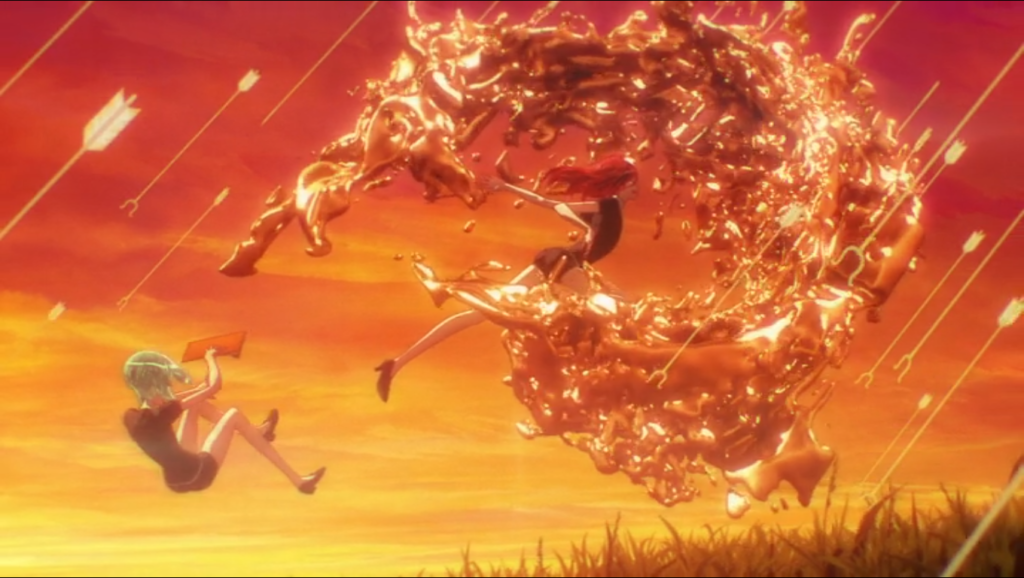 You might’ve noticed one of the distinctive things about the series right off the bat: all the gems are referred to with “they/them” pronouns, both in the official manga and anime releases (I’ve reached out to the translation teams and hope to have more specific information from them in future). This is rare on multiple levels. Japanese language has many nuances in regards to self-chosen pronouns (more akin to a spectrum than a binary) as well as an indirect sentence structure; so clear indication of gender might only be given when someone else speaks about a character; Kino of Kino’s Journey (2003), for example, refers to themself with the masculine-leaning “boku” but also corrects strangers who call them “boy” or “girl” specifically (in “Coliseum (Part 1)”). Likewise, some words only have a gendered version even if the character doesn’t gender themself–i.e. There are words for “older brother/sister” but not “sibling.”

In truth, referring to other individuals by their name rather than a pronoun is so common, that it becomes altogether difficult to find clear-cut examples of gender neutrality as western language has pushed to understand it (trans individuals might refer to themselves as having “used to be a boy/girl” and the nonbinary equivalent “x-gender” is still quite new), meaning translators must rely primarily on context–Japanese pronouns alone rarely paint the entire picture for an English equivalent. 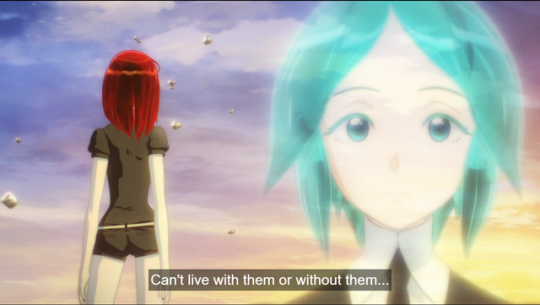 For years, this fluidity translated to making binary decisions. ambiguity Early 2000s translations for Wish and Soul Eater picked gendered pronouns for characters who aren’t gendered, assuming it would be less confusing or awkward. Part of translation is, inevitably, localization–taking elements that don’t have a 1:1 equivalent and trying to impart the feeling of it for a foreign audience; as neutral pronouns and trans/nonbinary people fight to gain more of a voice, that means taking that possibility into consideration as well (as Lustrous does). But language is political, and change rarely happens without conscious, concerted effort. In this arena, the push to use the neutral option where available is still uneven.

While Sentai Filmworks (the license holders for Lustrous) have a semi-proven track record, including last season’s Made in Abyss, Funimation (who provides many of the subtitles for Crunchyroll), has a far spottier track record. The company’s translation of Attack on Titan does avoid using pronouns for Hange, but did so only in its second season after an authorial mandate (Hange is referred to as “miss” in season one and only “lieutenant commander” in season 2). Most crucially, their handling of Kino’s Journey – the Beautiful World- (a franchise starring one of the most famous nongendered AFAB characters in anime) prominently referred to Kino by female pronouns in their press material (Crunchyroll’s in-house editorial staff uses neutral pronouns). 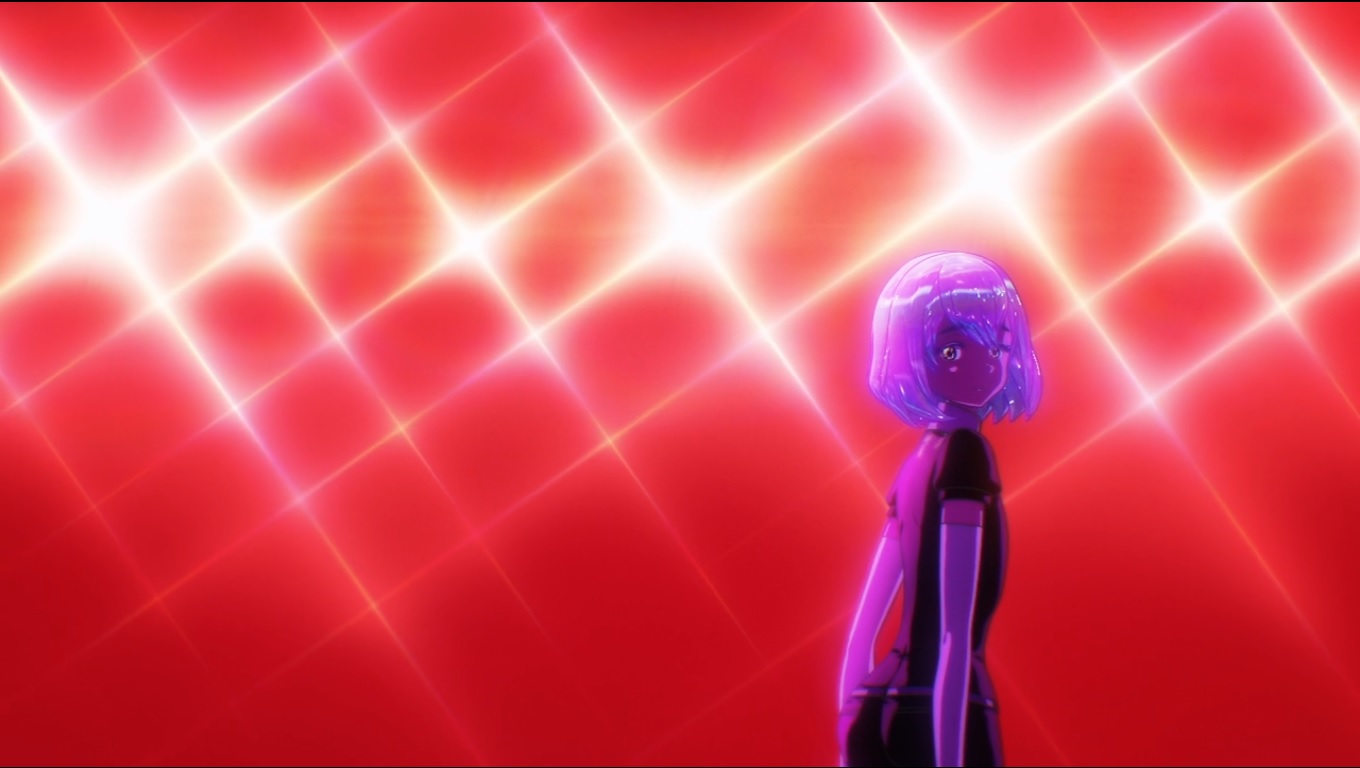 Lustrous’ pronoun decisions would still be incredible without that knowledge of the industry’s historic erasure of potential representation, but there’s no denying that it feels sweeter after years of having potential representation, or at the very least a more nuanced conversation about gender, shoved under the rug (EDIT: I spoke with the translators of Lustrous’ anime and manga regarding their translation decisions here).

I don’t mean to sell this as perfect representation, a nice ideal that too often strangles experimental inclusive works in their infancy. All the gems suffer from Tilda Swinton Syndrome (i.e. they are all tall, lanky, and masculine-leaning androgynous), a piece of meta critique I’ve talked about elsewhere. Not all nonbinary people have felt as positively about it, nor should they be required to—we are, none of us, a monolith. But there is something earth-shakingly amazing about seeing a whole cast of well-developed, likable characters being referred to as “they.” 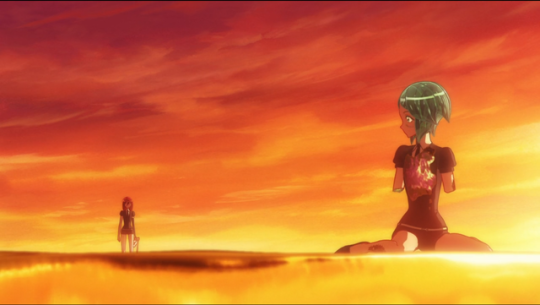 Nor are the issues of pronouns, body, and identity mere surface elements. They’re core themes; characters struggle with their assigned bodies and what they’re permitted to do because of them. Phos and Cinnabar feel trapped. Bodies are sites of memory and experience. They come apart but are also possible to reassemble and even to modify, and the joy in that latter discovery hit me deep. This is not a manga About Transness, but its themes resonate with aspects of being trans, of spending your life thinking about your body whether you live with persistent, sporadic, or no dysphoria.

These things would interesting, if not much more, in any show. But Land of the Lustrous is also gorgeously made. Its CG visuals make ample use of a dynamic camera to sell exhilarating fight scenes, beautiful vistas, and the uncanniness of gem bodies; but a blended technique gives the gems 2D facial features mapped onto their models in order to allow for subtle expressions. The affection and care taken with adapting the material not just to the letter but in ways that capture the feeling of the manga using the tools and needs of a different medium, all but leap off the screen. 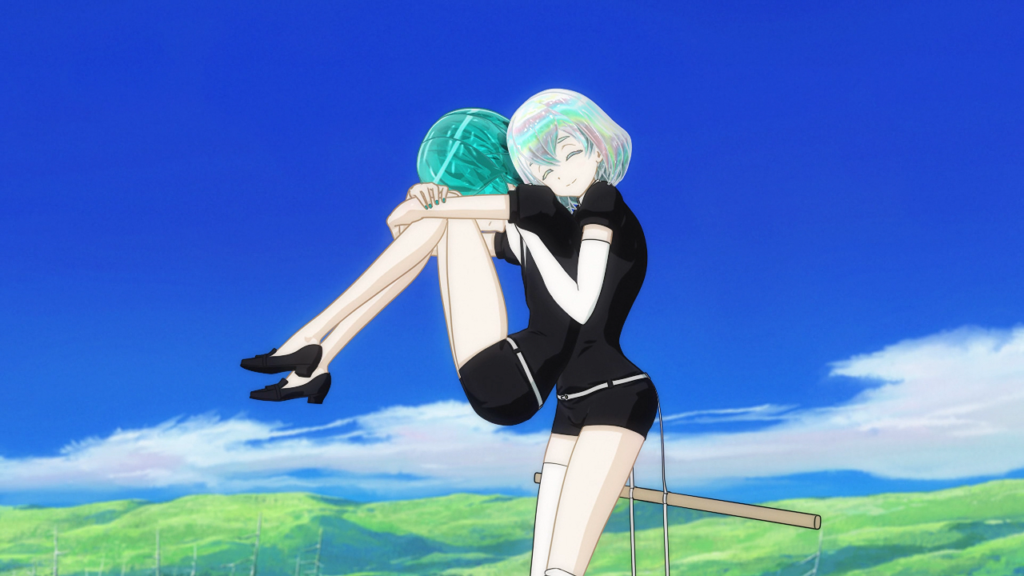 Land of the Lustrous is a special show. The acting is accomplished, the direction bold, and the content not just thoughtful but funny and devastating at turns. It would truly be a shame if it were to become an overlooked treasure. The anime is currently streaming on Anime Strike (behind their double paywall, more’s the pity) and the manga is being released digitally by Kodansha Comics. I cannot more strenuously encourage you to give them your financial support.

Vrai Kaiser is a queer author and pop culture blogger; they’re watching ALL the sentient rock shows. You can read more essays and find out about their fiction at Fashionable Tinfoil Accessories, listen to them podcasting on Soundcloud, support their work via Patreon or PayPal, or remind them of the existence of Tweets.