Black and Brown Girls Don’t Care About Your Respectability Politics 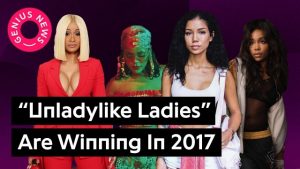 When Genius posted their video: “Rihanna, SZA, Cardi B, and Jhené Aiko Prove ‘Unladylike’ Ladies Are Winning 2017” about the new rise of sexually free black and brown women in Hip-Hop and RnB, it brought a smile to my face. As any brown woman will tell you, from the moment we go through puberty we are told that we have to carry ourselves a certain way or you’ll be seen as “fast.”

“Fast-girls” are like a cautionary tale told to young women about what they can end up being if they don’t protect themselves and their virtue. Chewed up and spit out by men who just wanted you for sex and you might even end up becoming … pregnant! *Gasp.*

Now, women have always been sexual in Hip-Hop: Lil’Kim, Foxy Brown and Trina to name just a few. I will always remember listening to Lil’ Kim proclaim in “Not Tonight” I don’t want dick tonight/Just eat my pussy right and shaking every time because being able to just be like, look dude you need to just focus on me right now is something women struggle to do sexually every day. Yet the way these women were treated in the industry because of their sexual openness completely ignores their talents and only focused on their sex appeal. Lil’ Kim is a trendsetter and legend when it comes to Hip-Hop, yet most articles about her focus mainly on her “beef” and physical appearance.

Yet the way these women were treated in the industry because of their sexual openness completely ignores their talents and only focused on their sex appeal. Lil’ Kim is a trendsetter and legend when it comes to Hip-Hop, but most articles about her focus mainly on her “beef” and physical appearance.

Their skills are often credited to men, and once their sexual value no longer there for the taking, they are told they are washed up and to retire. Unlike artist who carried themselves in “respectable” ways, like Lauryn Hill, Missy Elliott and Queen Latifah, as if one is better than the other.

The video shows Mariah Carey having to fight back against criticism about the sexual appearance that she began to incorporate later in her career, in comparison to the more conservative outfits she wore when she was younger. Of course, when she was younger her career was being controlled by men. Brandy having to pretend she was married because having a child out of wedlock would have destroyed her career’s image of being a “good girl”.

These things happen to black and brown women in the industry because when we fall off the path of what is supposed to be “appropriate behavior” it makes us “ghetto” “ratchet” and that we are “letting people down.” Sorry, but f-that. When it comes to the sexual revolution, the sad reality is that while Madonna was able to sort of push that envelope for white women early in her career, black and brown women are still fighting that fight.

Janet Jackson began it years ago when she broke away from her father’s control to create the album Janet in 1993 featuring songs like “If” “Throb” and “Any Time, Any Place.” Her music was deeply influential to Britney Spears when she began to break into a more sexually authoritative place, but you’d never know that with all the Madonna comparisons.

Selena Quintanilla-Pérez, the legendary Tejano singer, was also criticized her career for wearing suggestive clothes because she was supposed to be a role-model for young girls. Yep, because seeing a Mexican-American woman winning in her field and doing some literally no other Tejano artist had done before isn’t enough to be a role model?

Thankfully, the tide is turning, and in addition to being successful, the black and brown female artists of today not only don’t care about being ladies, they are also in control of their voices and narratives in a way unlike before.

Rihanna answers to Rihanna. She is sexy in a way that reflects her and what she wants. That is the definition of sexual empowerment. Jhené Aiko’s album Trip isn’t just about drugs, it is about motherhood, loss, and self-care. SZA’s Ctrl is about sex, insecurities and the relationships between women. The reason why Bodak Yellow is a song that when every woman of every race hears it makes them wanna go into someone’s face and tell them off, is because it comes from a place of genuine power.

Hopefully, instead of warning girls to be afraid of sex and making them guard their appearance, we can instead teach girls how to have safe sex and tell boys to treat women as if all they are worth is between their legs.