One of the Best Kylo/Hux Moments in Star Wars: The Last Jedi Is All Thanks to Domhnall Gleeson 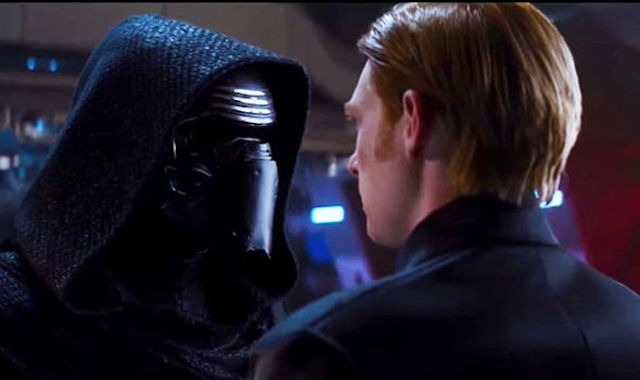 No matter how much some corners of the internet enjoy the pairing, I don’t want to see Kylo Ren and Rey anywhere near each other unless Rey is kicking his butt in laser sword combat. No, the only pairing I’m interested in when it comes to Kylo is the one of ultimate frenemies: Kylo Ren and Armitage Hux.

There’s not much that delights me more about the current Star Wars movies than these two baby-men hating each other as much as they hate everyone else, and The Last Jedi was not shy about playing that up. The movie had tons of moments both big and small across all its characters, but as it turns out, one of the best—and most illuminating—moments with Hux and his rival made it into the movie thanks to some input from actor Domhnall Gleeson.

As much as Gleeson has spent the last two Star Wars movies delightfully chewing through the scenery like a pack of hungry rathtars, he’s also kept the core of his character in mind. That core has been a lot easier to see in Disney’s wide array of officially canon companion materials—notably with Hux facilitating the assassination of his own father—but in the movies, what he’s really all about hasn’t been quite as clear.

That’s what Gleeson sought to rectify when he asked Director Rian Johnson to add a small moment displaying Hux’s murderous tendency to get ahead at all costs, which eventually became the scene with Hux reaching for his blaster while Kylo Ren is incapacitated:

In the video above, the actor tells Kevin Smith,

“That was the one moment I asked Rian for in the movie, yeah. I asked him for a moment that would do something like that. Because, General Hux is like a kicked dog for the whole movie, he just keeps on getting thrown into stuff, bullied. I was like, I wouldn’t like people to forget that he’s also a really nasty piece of work and could have an effect on the way things move forward. We talked a bit about where the right place would be and we came up with that.”

The moment was quickly played for laughs, with Hux dropping the idea as soon as he noticed any chance that Kylo might catch him in the act, but as humorous as it was to just see that as spinelessness, it was a perfect display of Hux’s shrewd nature hiding just beneath his surface buffoonery. After all, he really doesn’t stand a chance against a conscious Kylo, so it’s hard to blame him for deciding to bide his time.

So, while the Kylo/Hux moment that provided me the most joy was still the one when Hux screeches identical orders to what Kylo just said and elicits a very confused look from his new Supreme Leader, the one in the throne room has a lot more going for it beyond the gag itself.