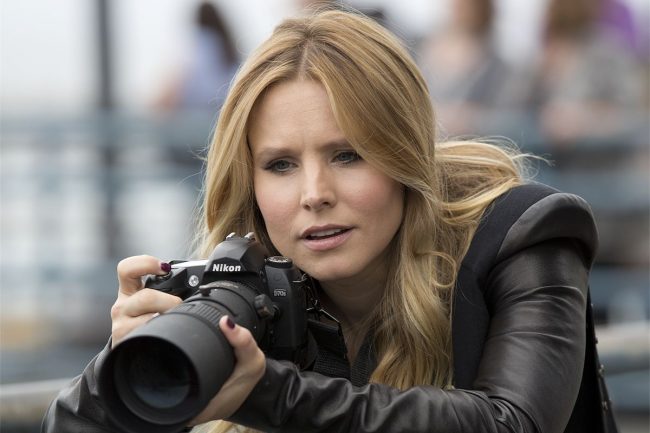 We used to be friends a long time ago. Then our friends were off the air. Then they Kickstarted a feature film. Now, they insist that they’ll be back on television. Kristen Bell is determined to bring back Veronica Mars, even if  she has “to do it as Murder She Wrote at 80.”

Talk of a Veronica Mars revival goes back to last year, when Bell spoke with TVLine at San Diego Comic-Con and said that she and show creator, Rob Thomas, had been talking about bringing Veronica Mars back as a limited series revival, as has been happening with shows like Gilmore Girls, Twin Peaks, and Will and Grace.

She also made sure to add that “this time around we’re not going to ask the audience to pony up for anything.” Not that I minded backing the movie. I still rock my Veronica Mars Kickstarter backer t-shirt on the regs.

Thomas later confirmed at the TCA panel for iZombie that “Kristen and I both want to figure out some way we could do a six-episode Veronica Mars mystery. If I were a betting man, I bet that it will happen. I just don’t know when it will be.”

So, what’s the deal today?

During a Facebook Live/IndieWire interview with former Veronica Mars co-star Ryan Hansen (who was promoting his upcoming YouTube show, Ryan Hansen Solves Crimes on Television) that she and Thomas still email about a revival every couple of months. Hansen had been asked about the possibility of that, and so he called Bell directly, who reported that she and Thomas both think that Veronica Mars is most at home as an episodic series, rather than as a feature film. “We are willing to put the effort in,” she says. “I mean, if I have to do it as Murder She Wrote at 80, we’re going to do it. It’s going to happen.”

I would be really into a Veronica Mars revival. And hey, if the plot ended up being that Veronica died while pursuing a case and ended up in The Good Place, I wouldn’t be mad.