Korrasami Is 100% Canon, Creators of Legend of Korra Confirm | The Mary Sue

Korrasami Is 100% Canon, Creators Of The Legend of Korra Confirm

And they would know. 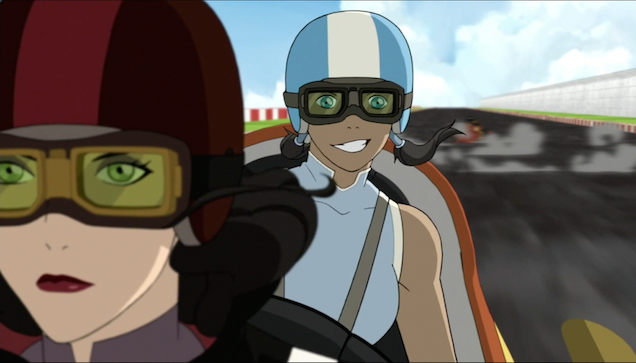 Ladies in love driving cars? Utena would be so proud.

“Oh but that ending is so ambiguous, maybe they’re just really good lady friends who enjoy holding hands with each oth—” NOPE, THEY’RE IN LOVE, PUNKS. And Bryan Koneitzko and Michael Di Martino both took to their personal Tumblrs to explain just that to all the naysayers.

First, let’s look at Michael DiMartino’s post, which definitely gets the message across that the romantic nature of Korra and Asami’s relationship was absolutely on purpose:

Our intention with the last scene was to make it as clear as possible that yes, Korra and Asami have romantic feelings for each other. The moment where they enter the spirit portal symbolizes their evolution from being friends to being a couple. Many news outlets, bloggers, and fans picked up on this and didn’t find it ambiguous. For the most part, it seems like the point of the scene was understood and additional commentary wasn’t really needed from Bryan or me. But in case people were still questioning what happened in the last scene, I wanted to make a clear verbal statement to complement the show’s visual one.

Bryan Konietzko’s (much longer) post is entitled ‘Korrasami is canon,‘ and only gets better from there. “You can celebrate it, embrace it, accept it, get over it, or whatever you feel the need to do,” he writes, “but there is no denying it. That is the official story.”

In his post, Konietzko also cites a famous quote by Hayao Miyazaki, that just a boy and a girl being friends with one another shouldn’t automatically mean they’re in love (which is also how the Korra writers came up with the idea that Mako and Korra should break up and respect one another as platonic friends, by the way), and says he considered that the opposite—two people who share a gender shouldn’t automatically be assume not to be in love—must also be true. For several seasons, the team operated under the assumption that they would not be able to depict Korra and Asami in a romantic relationship, and instead planted hints throughout the show as to their true intentions. Then, he says:

[T]he thought struck me: How do I know we can’t openly depict that? No one ever explicitly said so. It was just another assumption based on a paradigm that marginalizes non-heterosexual people. If we want to see that paradigm evolve, we need to take a stand against it. And I didn’t want to look back in 20 years and think, “Man, we could have fought harder for that.” Mike and I talked it over and decided it was important to be unambiguous about the intended relationship. “

Thus, hand holding and romantically swelling music—which, he also stresses, has absolutely nothing to do with “caving to the fans” who liked Korrasami. “Trust me, I remember Kataang vs. Zutara.” he says. Yikes. Yeah, I guess maybe he wouldn’t have a problem ignoring fans, then.

But what of the viewers who simply didn’t understand where this relationship is coming from, despite the showrunners placing hints there for literal years? “If it seems out of the blue to you,” Konietzko adds, “I think a second viewing of the last two seasons would show that perhaps you were looking at it only through a hetero lens. ” OH, SNAP.

Or, to let Korra and Asami react for themselves: