The Legend of Korra Newbie Recap: “Beyond the Wilds” 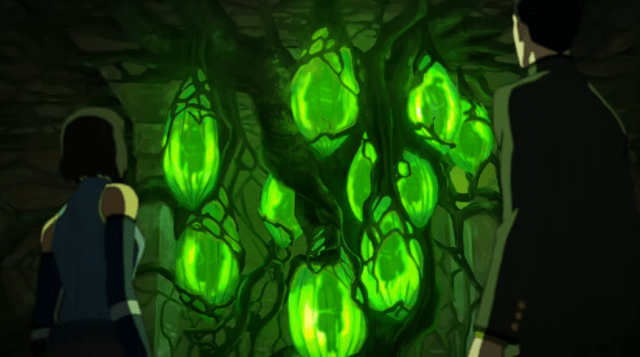 We’re back on track after last week‘s complete and utter waste of my time. Let’s do this.

(Yes, I do know about the reasons “Remembrances” was a clip show. No, I don’t really care. It doesn’t change my negative assessment of the episode. An episode is what’s on screen, and what was on screen was bad; it being bad for a commendable reason does not change that fact. It’s fine. Good shows have bad eps all the time. Battlestar Galactica had “Black Market,” and Korra had that.)

We start with hipster airbender Ryu, now a tour guide in Republic City’s spirit wilds (there’s a gentrification joke here, I can feel it in my bones), getting vinenapped by a bunch of ANGRY-ASS TREES who are upset that, alllllll the way over in swampland, Kuvira’s cutting down the bunion tree (sorry, banyan tree) for her own nefarious, nuclear purposes.

I’m with you, vines. Humans suck.

VINES FOR THE BEST KORRA CHARACTER.

Across the city Jinora feels a ~*~disturbance in the Force~*~ and goes to tell Korra about it. Korra’s been dealing with Opal, who’s super pissy about the fact that … her city’s been conquered by mentalbender Hitler, who’s holding pretty much her entire family hostage. Yeah, OK, Opal. You’re cool. Opal didn’t do much for me originally—she’s really sweet, and that’s not normally a character trait that I really respond to on a personal level (see: Tigh and Gaeta from BSG. I like ’em assholish and/or alcoholic and/or possessed of the world’s worst decision-making skills)—but the more she loses her shit and yells at people about how MY FAMILY WAS BASICALLY KIDNAPPED AND NO ONE SEEMS INTERESTED IN DOING ANYTHING ABOUT IT, WHAT THE FUCK, the more I like her.

Sweet, I can give or take. Deceptively sweet, but will cut a bitch when needed, I’m there for. I’m a Hufflepuff. That’s our whole thing.

Korra busts in on Tenzin, Raiko, Wu, Lin, and Fire Lord Izumi having a fancy world leader conference to which Korra was not invited, GOSH.

Varrick and Bolin, party crashers, show up and say, “Hey, BTW, you know what might influence your opinion about what to do about Kuriva in some small way? She’s building a WMD. Just FYI.” Raiko and Lin are ready to bring the smackdown, but Tenzin and advocates a peaceful solution–they can’t bring the fight to her, because she hasn’t actually done anything outside the Earth Empire yet. Nobody gives a shit about Wu’s opinion. So the deciding vote belongs to Fire Lord Izumi, who votes with Tenzin against a pre-emptive strike. “Uh, being warmongering assholes was kind of a thing for the Fire Nation for a while, and IDK if you heard but it didn’t end well, so we’re trying some #rebranding #yolo.”

(You know and I know that a showdown between Kuvira and the good guys is inevitable, so it seems from our perspective like Izumi is on the wrong side here, but honestly, go her. She’s looking out for her people. And she does agree to help her allies with some border fortification. It’s not like she’s full Neville Chamberlain-ing things. Also, I like her glasses.)

Bolin, Mako, and Korra have a nice group hug and patch up all that drama about how Bolin didn’t realize Kuvira was a power-hungry maniac. Meanwhile, Jinora goes to the spirit wilds and gets captured by the vines. But she manages to send a Force Ghost message out to Korra before she’s dragged to the spirit world, because Jinora gets shit done. Mako and Korra go into the spirit wilds to do some investigating and find that Jinora, Ryu, and Ryu’s tour group are suspended in these freaky-ass Alien pod things. Mako’s solution is BURN THIS MOTHER DOWN, but Korra (smartly) suggests, hey, I’ll try some of my peaceful heal-y magic instead. That doesn’t work. And more than that, she can’t even go into the spirit world to investigate the present shenanigans, because she’s still PTSDing hardcore over what happened with Zaheer.

Korra, ready to put this whole poison plot to rest hardcore (same), goes to Tenzin and tells him she wants to confront Zaheer face-to-face. Tenzin initially refuses, because–as Korra believes–he doesn’t have faith in her ability to get jack-shit done anymore. In reality, he explains, he’s a bit shook up because his daughter just got kidnapped and would like his surrogate daughter to not die, please. He caves, and Korra ventures to Zaheer’s remote prison to face her own personal boogeyman.

But before we get to that. Bolin tries to apologize to Opal for siding with Kuvira, and–again–her family’s been kidnapped, so she’s really not in the mood. Bolin, raised on too many rom-coms, engineers this situation where Opal thinks he’s been grievously injured, so she rushes to help him, only, SURPRISE, it’s a fun picnic! Ain’t I a stinker?

Opal is not impressed.

Meanwhile, President Raiko tells Asami and Varrick that they have to work together and help stop Kuvira using

Back at the prison, Zaheer’s turned into a beardy unabomber type who uses some pencil-dicked mind games to try and get under Korra’s skin. He guesses that she’s not able to go into the spirit world. But, he says, it’s nothing to do with him or the poison. Korra has limitless power, but she’s holding herself back. Not actually being a huge fan of evil dictators himself, he offers to escort Korra into the spirit world. Not having any other option, she accepts. Zaheer’s actually pretty nice this episode—he helps her work through her issues and get Good Kite Raava back. He’s a bizarro, beardy Tenzin. Raava shows Korra where the spirits of Jinora and the others are being kept and tells her that, though she may not be able to bend elements in the spirit world, she can bend energy—the best kind of bending there is. So boop de boop, she does, and Jinora and Ryu’s spirits are rescued, albeit covered in slime, Nickelodeon-style.

Back in the physical world, Korra tells Mako that she’s finally worked through her issues—the key was accepting the terrible things that happened to her, not trying to shove them away. Story-wise, this is a bit of an abrupt resolution to a subplot that’s been dragging on for half a season, but whatever. I’m happy to back away from prolonged angst-based storytelling.

We end the episode with Opal and Lin, less in angst mode than FULL-ON FURY MODE, about to head off on a secret mission to Zaofu. If The Man punked out on saving their family, they’ll do it their own damn selves. For Bolin, it’s a moment of truth. Yeah, you can keep on with the grand and slightly skeevy romantic gestures if you WANT, Opal tells him, but I’m not really feeling it on account of EVIL DICTATOR. CAPTURED MY FAMILY. KIND OF MORE RELEVANT. On the other hand, if you want to prove yourself to me, there’s this suicide mission that could use a third member …

Of course, he agrees to go. Opal: STEALTH SLYTHERPUFF QUEEN. 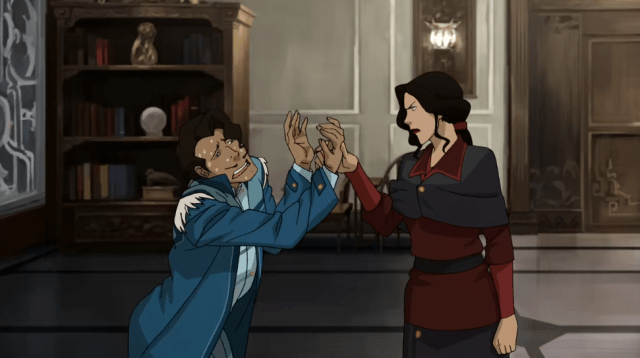