Your cat is too smart to let know that it's plotting world domination. 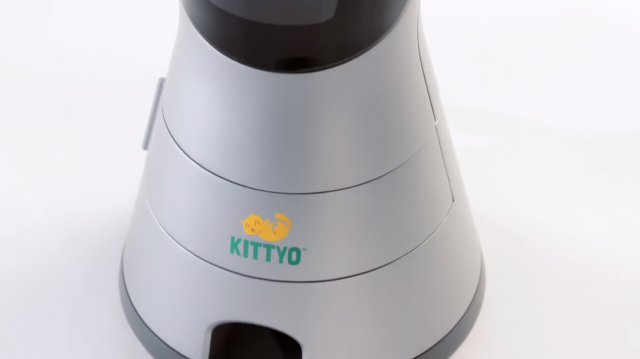 You know we’ve been given too much power when we can drive our cats insane with a laser while we’re not home. Cats probably don’t miss us as much as we miss them, but with Kittyo, you can keep them entertained, while keeping an eye on them through an app with your iPhone or Android device. If anything, it’s more entertaining for the owners.

Not only does it look like a small coffee-maker that’s also a video camera, it’s got a built in laser beam, which is probably one of the most exciting things about Kittyo, and it has a dispenser for treats. So I guess after you give your cat a workout, you can treat them for cruelly making them run in circles for minutes…or hours. Kittyo also has speakers in case your feline friend needs to hear your voice to make it through the day.

Creative designer, Lee Miller came up with the idea for Kittyo when he babysat his friend’s kitten and discovered how crazy she was about her cat, wanting Miller to document it’s every move. Kittyo’s Kickstarter campaign started just a couple of days ago and it has already raised almost $120,000, surpassing their $30,000 goal. Kittyo should sell for about $189, but Kickstarter supporters get a $50 discount and more.

Here’s the ad promoting their new product on their Kittyo channel: