Riverdale Recap: “A Kiss Before Dying”

"Are you La La Land-ing me right now Riverdale?!" 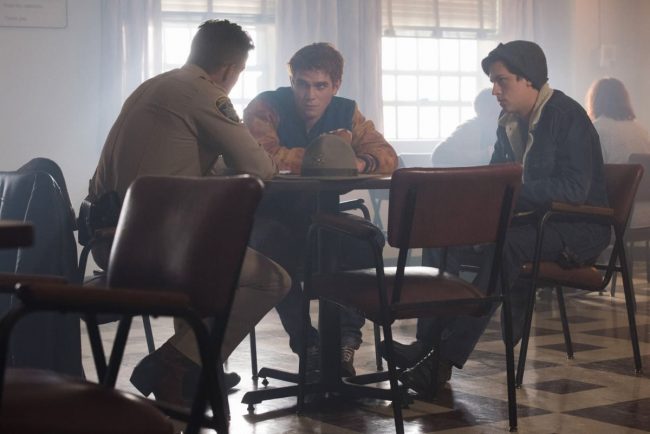 The season picks up right where we left off—Fred Andrews has just been shot at Pop’s. As Jughead’s voice explains in his familiar narrator timbre that Archie, who’s frantically trying to bring his dad to the hospital, doesn’t know how to drive something becomes clear. This is not stage-fright Archie. This is not guitar playing Archie who thinks the best of everyone and everything. This season’s Archie is wearing a blood-stained jacket screaming for help, and he’ll never be the same as someone close to him becomes a victim of gun violence.

Suddenly, we go into Fred’s mind. This was quite the jarring moment, as the parents of Riverdale are more often than not figures shrouded in mystery with questionable motives and hidden backstories (with Fred being the upright and lawful good exception). He pictures himself at all of Archie’s milestone moments—his son’s graduation, working with him in construction, getting married, etc. At this point, I yelled “Are you La La Land-ing me right now Riverdale?!” at my computer.

I had seen some of these images from creator Roberto Aguirre-Sacasa’s Twitter and I never felt more mislead finding out they were near-death visions. And make no mistake, that misdirection is completely on brand with Riverdale and this episode is the perfect example. As Sheriff Keller approaches, we get the sense that Archie is hiding something about what happened between the shooting and his driving. Jughead immediately voices suspicion that this was a planned job. Again, the teenagers have to do all the heavy lifting and news that appears (Fred’s wallet is gone, Pop’s doesn’t remember calling the police but they arrive anyway, and Keller is too eager to call it a robbery despite no money being taken) seems to confirm this. The police have to be in on this.

Knowing Riverdale though, it won’t be that straightforward or easy.

We’re planted with suspicions toward Hiram Lodge again, as Veronica’s family is starting to go full mafia in long conversations about loyalty and respect. Is Hermoine Lodge as innocent as she appears? Truthfully, after a whole season of “IT’S HIRAM LODGE HE DID IT” I just want this all to pay off. Although if it doesn’t, we’ll always have classic lines like, “If the Manolo Blahnik fits” and “She drank your Cristal.” “How disrespectful.”

These questions continue lingering though, as we have to check in with every member of the crew—this is the first episode of the new season after all. There’s a bit of awkwardness when this occurs though, like did Kevin Keller really have to ask Betty about Jughead to remind us they love each other and almost had sex? They’re in a hospital waiting room. Does that really move the plot forward or is it just kind-of chunky exposition? Also, Archie’s insistence that the shooter was wearing a hood, not a mask, a hood further confirms that the character is, indeed, Black Hood. 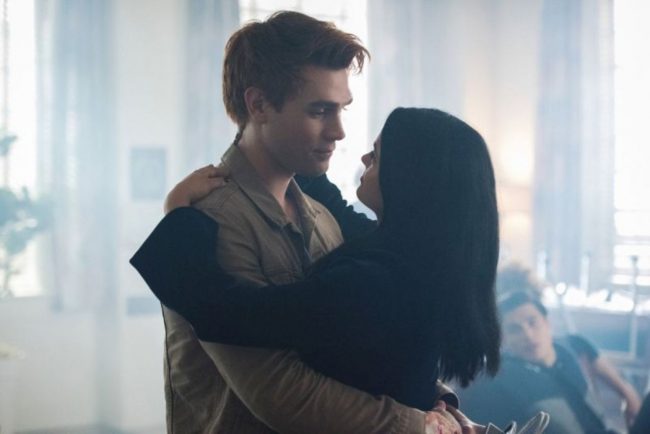 The interactions between Veronica and Archie were an exception to this, as we see their relationship being tested in a really upsetting way. When Archie lashes out at her, perhaps the first time he hasn’t been the patient and nice person we’re used to him being, Veronica prepares to leave before taking a deep breath and returning to support him. Camila Mendes’ changes in expression are amazing here, and despite being pretty blah about Varchie this really won me over. Did they have to have a steamy shower scene though? I yell, “This is not the time Ronnie someone has been shot he is washing off blood and also why are you still wearing your pearls!” at my screen. I am out of breath.

In contrast, Betty is being a bit judgey about the Southside Serpents and we’re seeing the cracks in her relationship with Jughead start to form. On the plus side, we finally see Jughead getting hungry and eating a ton of food at Pop’s? Ol’ Jug tries to use the Serpents to try and find information, and while they don’t come up with anything they do leave a beaten man in his trailer to show that they’re loyal and he’s a Serpent whether he likes it or not. Not sure if this is a proper opinion, but I think Jug should embrace his new friends. You just call them in the middle of the day to the hospital and they spend the whole day trying to help you avenge a man who’s like a second-father to you? I want someone who’ll take care of me like that.

Betty’s scared the jacket seems like a “second skin” to Jughead, but hey maybe it’s just a really comfortable jacket. Where can I find one?

Cheryl is at the hospital too, dressed in pure white to bring her mother who’s suffered terrible burns trying to save a portrait from her burning house. (That’s some Dorian Gray shit, are we just going to gloss over that?) Cheryl talks to her hospitalized mother beginning, “Here’s the reals Baby J,” before saying that her mother abused her. Oh Cheryl, I’ve missed you. She then goes on a frightening bit where she momentarily deprives her mother of air though, and now I’m worried about where she’ll end up. She just found out that her father killed her brother and nearly committed suicide—can someone please get her professional help?

Back to the dream-like sequences, they’re a perfect way to carry us through the premiere, building an urgency of “Wait, are they really going to kill off Fred Andrews in the first episode?” The title itself, a reference to a 1991 neo-noir, becomes an “oh shit” moment when Cheryl goes to Fred’s hospital room and gives him a “kiss of life” like Archie did for her at the frozen pond. However, much like Archie’s withholding of information, which turns out to be more about his father firing Serpents (we already knew this) and his own guilt for not doing more to protect his father, this ends up being another case of misdirection.

Fred Andrews recovers just in time, promising to protect Archie. Archie, however, is now living in fear and prepared to protect his family at all costs now that he’s gotten so close to losing his dad.

The final scenes end with the return of a familiar character…Miss Grundy. I yell, “NO NOT AGAIN” at my screen as she kisses a different student named Ben, because she’s a predator and she’s bad. It turns out that’s the titular kiss, and the Hooded Man then kills her immediately after. So far, he seems like a kind of slasher film-type and the murder of a sexually immoral woman (a distinction from the teen-slasher victims who are just not virgins vs predators) feels right up that alley. Is Grundy connected to the Fred incident, or is this just a serial-killer Saw thing where the Hooded Man kills whoever he wants?

All in all, while a bit disjointed in jumping from bloody murder to mimosas, Riverdale is back. This episode gave us a lot of speculate about in terms of violence, but the emotional heart of it all—Archie’s trauma, changing family dynamics, and new relationships are sure to be just as compelling to follow.

What did you think of how Riverdale kicked-off season 2?