Kirk, Spock, and the Kobayashi Maru of Modern Masculinity | The Mary Sue

“To Boldly Go Where No Man Has Gone Before”: the Kobayashi Maru of Modern Masculinity 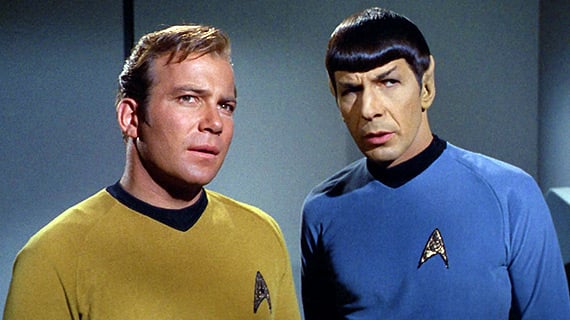 Recently, I was watching For the Love of Spock, Adam Nimoy’s documentary in tribute to his father, when I had something of an epiphany. One of the people being interviewed explained that Nimoy never played Spock as emotionless; rather, he played the character as always struggling to keep his emotions in check. It struck me that, not only is this the reason Spock was infinitely superior to other Vulcan characters in later Star Trek series, but it also invites a reading of Spock’s Vulcanness as a metaphor for modern masculinity.

In her 2014 speech launching the “He for She” campaign, Emma Watson explained some of the challenges faced by men as they strive to appear “manly” (read: unemotional, strong, invulnerable):

I’ve seen young men suffering from mental illness, unable to ask for help for fear it would make them less of a man. In fact, in the UK, suicide is the biggest killer of men between 20 to 49, eclipsing road accidents, cancer and coronary heart disease. I’ve seen men made fragile and insecure by a distorted sense of what constitutes male success.

As our society becomes more embracing of the idea of gender as a spectrum and opens up new possibilities for genderqueer and gender nonconforming individuals, we continue to cling to a problematic definition of masculinity that hinges on toughness and a lack of emotional vulnerability.

Even the much-touted January 2017 issue of National Geographic entitled “The Gender Revolution” included an article by Chip Brown entitled “Making a Man: How does a 21st-Century boy reach manhood? Some paths are clearer than others”. The article laments the struggles of a young man “approaching manhood in an American culture that is lurching towards a gender-neutral society” where there are no “rituals or overt rites of initiation that would clearly mark [his] transition from boy to man” (90).

The article juxtaposes this supposedly unfortunate young man’s situation with the story of a boy growing up in west Kenya who must face a grueling test of manhood requiring him to suffer stoically through physical humiliation and ritual circumcision. The author opines, “Dismay aside, I found it hard not to grudgingly admire a culture that gives boys such an unambiguous path to manhood” (102). Even the issue that promised to map the brave new landscape of gender worldwide expresses a longing for “manhood” to continue be defined as stoically repressed—as in Vulcan.

In The Original Series, Spock’s logical rejection of emotion was presented as a foil to Kirk’s impulsive and often brash machismo. If Spock was the super-ego of the show, Kirk was its id. However, if we consider the dialectical relationship between the two, we are presented with a fascinating case study of just how we’ve gone wrong in raising our boys.

Kirk and Spock aren’t really yin and yang at all: they are two sides of the same restrictive masculine coin. It’s no accident that Kirk’s most famous exploits are either feats of physical strength or feats of seduction. Whether he is wrestling a Gorn in “Arena” or kissing one of the countless maidens who fall so willingly into his arms, Kirk’s displays of emotion are largely confined within two very safe, conventionally masculine boxes: aggression and libido.

Interestingly, for all that Spock is consistently presented as Kirk’s opposite, he too shares these two drives, as we learn in the classic episode “Amok Time.” Spock’s one overwhelming emotion, the one he simply cannot mask, is the pon farr; his biological imperative to mate is too strong for him to keep in check—and the only thing that finally tempers his libido is aggression. Indeed, Kirk leverages aggression explicitly to neutralize Spock’s less acceptable romantic side in “This Side of Paradise,” saving his friend from the effects of the plant’s spores by picking a fight with him until he comes to his senses and realizes that such lovey-dovey gallivanting is beneath him. Combined, Spock and Kirk teach us that men need to hide their emotions and that the only two impulses they can ever indulge are sex and violence.

In our current climate, in which alleged sexual abusers are awarded Best Actor Oscars and the Presidency of the United States, it’s worth considering the lessons that Star Trek has to offer. We know all too well the problems of rape culture, but we rarely consider how much even our beloved icons—apparently enlightened men like Spock—contribute to an ongoing problematic definition of masculinity that directly results in rape culture. If we offer our boys no outlets but aggression and sex, if we tell them to “man up” each time they display emotion or vulnerability, we are ensuring that rape culture will be with us well into the future.

If Spock and Kirk, two apparently dissimilar examples of masculinity, are in fact one and the same, one wonders what the alternative might look like. Always ahead of its time, Star Trek recognized the potential harm that continually repressing emotions might do to a man over the course of his lifetime. In a heart-wrenching episode of The Next Generation called “Sarek,” Spock’s father experiences a Vulcan form of degenerative disease akin to Alzheimer’s—except that, instead of losing his memory, he loses control of the repressive mechanisms that enable him to contain his emotions. Interestingly, it is only through sharing his emotional burdens with another man, Captain Picard, that Sarek can regain his composure.

Perhaps this bond can show us a potential way forward; by showing vulnerability and forming meaningful, noncompetitive relationships with other men, it might be possible to cheat the system and “boldly go where no man has gone before.”