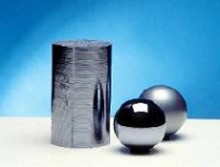 Though you might not know it by their day-to-day usage, metric units don’t simply exist, but are actually determined in terms of the physical world. The International System of Units (SI) has used some clever tricks to precisely determine the definitions of many fundamental units: For instance, a second is defined as “the duration of 9,192,631,770 periods of the radiation corresponding to the transition between the two hyperfine levels of the ground state of the caesium 133 atom,” and a meter is defined as the distance light travels in a vacuum in 1 ⁄ 299,792,458 of a second.

Compared to these, the definition of the kilogram seems surprisingly archaic: It’s defined as the mass of a specific cylinder of platinum (technically, a 90% platinum / 10% iridium alloy) in a vault in Paris. Given that this particular cylinder gains about 50 micrograms per century and that it’s a bit alarming to have so much of scientific measurement determined in terms of a physical artifact, some scientists hope to define the kilogram in more precise terms, and a study recently published on arXiv may point the way.

Several large teams have been attempting to define the kilogram in terms of the Avogadro constant, well-known to chemistry students as the number of atoms or molecules in one “mole” (about 6.022 times 10^23).

A team of scientists based in Germany measured the constant by counting the atoms in a painstakingly crafted one-kilogram sphere of silicon-28. The researchers chose silicon because its atoms tend to line up in crystal formation, eight atoms to a cube. Engineers ground and polished the spheres for two years to near perfection — if the spheres were enlarged to the size of the Earth, the tallest hill would be 9 feet tall, according to says Arnold Nicolaus, a physicist at the Physikalisch-Technische Bundesanstalt in Germany.
…
But the problem now is that not everyone agrees on the true number for the Avogadro constant. American and English projects have tried measuring the constant a different way, by balancing gravity’s force on a mass with the electrical forces needed to suspend it in midair, but repeated trials gave inconsistent measures of Avogadro constant.

The scientists’ most precise determination of Avogadro’s number is actually less certain than those old metal cylinders: Their value has an uncertainty of 30 parts per billion, whereas the cylinder’s mass has an uncertainty of 20 parts per billion. Moreover, per Nature, there’s actually a rival method of defining the kilogram without resorting to Avogadro’s number: Some researchers wish to “define the kilogram in terms of the Planck constant that relates the frequency of a particle’s wavefunction to its energy.” Whatever path we wind up taking — and a definitive redefinition seems at least several years away — a scientifically sound definition based in the physical world seems far preferable to a kilogram defined by a metal cylinder in a Parisian vault.