Perfectly Recreated Meme Shows How We Read Fic Now & Then

To My 14-Year-Old Self: Yes You’re Still Reading Fanfic

And it still makes you smile fondly while holding a beverage 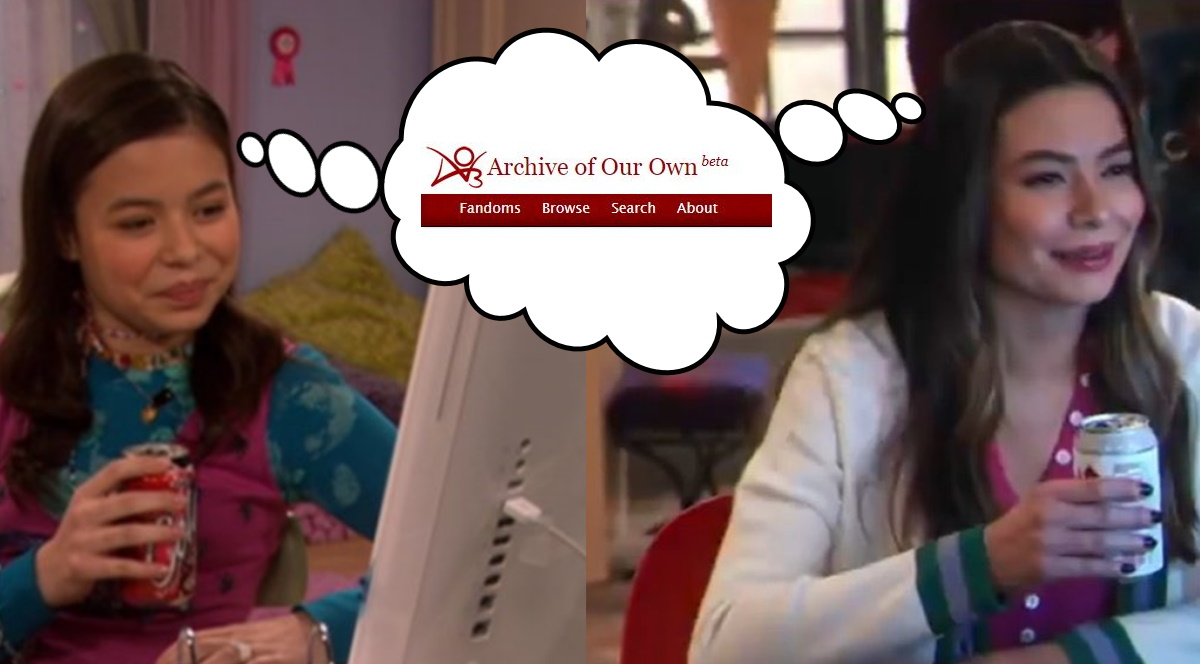 Megan’s “Interesting” meme will either elicit one of two responses, 1) I too watched Drake & Josh, or 2) who in the hell is Megan?

Full disclosure? I’m the second one. Until I saw this:

OMG SHE DID THE THING 😭😭 pic.twitter.com/FT3jIvQ7Vt

I most definitely recognize the image on the left because I spend an acceptable amount of time on the Internet that ranges between, “I should be sleeping,” and, “Yes, I still should be sleeping.” That girl in the image is Megan Parker, a character from Drake & Josh, and that’s … all I know, but I do think it’s fantastic that she did a callback to that unintentional yet now extremely well-known meme for the upcoming iCarly revival—that’s the image on the right.

Now that actress Miranda Cosgrove has recreated the meme, it has doubled in power—as popular memes tend to do, especially when the meme’s focal point gets older and more self-aware of the power of the Internet. I’m fairly certain Cosgrove knew that as soon as folks saw the image they’d put two and two together and, well, start making new memes out of her again.

This leads me to the topic of this piece because there’s one particular response that’s hit me right in my fangirl heart.

Personally, I discovered fanfic when I was 16, and like most fandom things I discovered at that age I had NO idea what it was. I was writing what I would learn was fanfiction in my trusty old Mead Composition notebook and passing it around class. What was I writing about? The sexual tension between Vegeta and Bulma that we all became privy to when Toonami finally started airing new episodes of Dragon Ball Z, of course.

My fic was in different colored gel pens and was so steamy—not that my teachers or parents knew, this was my little anime fandom secret between me and a handful of students in my Science class.

It didn’t take too long to discover an entire community full of people who took their favorite characters and created their own stories with them. Gundam Wing is where I learned the word fanfiction, by the way, thanks to the community that focused on the undeniable romance between Heero Yuy and Duo Maxwell because, well, Heero chose to rescue Duo instead of killing him.

You had to be there.

The number of headcanons I’ve developed over the years is, well, probably the average amount if you’ve been a part of this community from your teenage years to adulthood. This is why this tweet is so delightful to me.

The content look of discovery on Cosgrove’s face both as an adolescent and as an adult speaks to how I feel about fanfic and fandom in general, though there are some notable differences in the adult picture. The tech is better, of course, so no more having to use AOL CDS to get online, no more disrupting the family phone line so you can see if your favorite FF.NET author posted an update to that angsty songfic you’re reading. Why, you can even read fic on your PHONE, of all things, and people are even writing Twitter threads dedicated to your favorite ship.

Also, notice how Cosgrove is sitting at the computer with someone else in the room right behind her? That’s right, we’re ADULTS now. We don’t wait until we’re alone in the room to find out what really happened between Joe and Cherry of SK8 the Infinity after Joe poured those glasses of white wine for them, we’re gonna read that fic while we have company over. You think we’re gonna WAIT when we just got that AO3 notification from our favorite author updating their multichapter masterpiece?

I mean honestly don’t waltz up behind me unannounced when I’m at the computer minding my own business with The Cosgrove look on my face unless if you wanna see something very interesting.

Then again, my headcanon says that the background is a fandom enabler who shares the same ship. Fanfic near, and in, your thirties is such a good time. You start to collect your community favorites and bond over what really happened in your favorite series or movies. You have messenger groups that you send fics and art to so you can all gush over it, you have certain Twitter accounts you engage with JUST for fanfic talk, and you bond over the fact that the last time you updated your own fic was pre-pandemic.

Ah, you’d be so proud, younger me.