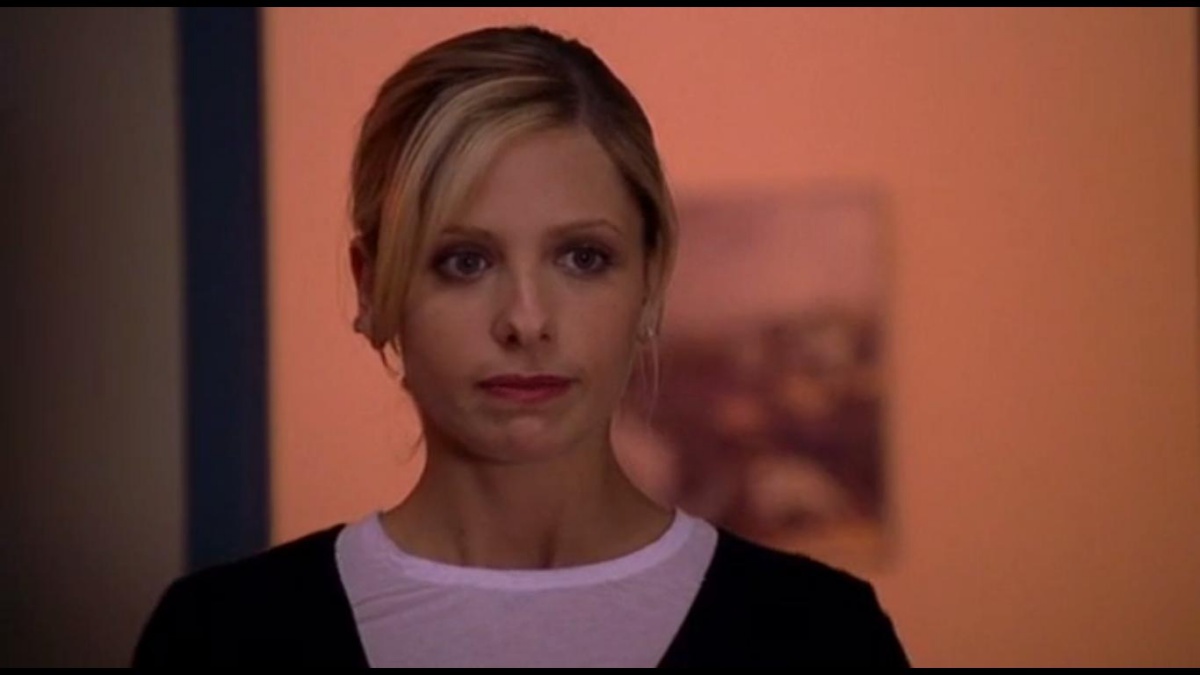 One of the fun things that happens when you watch a series years after it’s over is that you can read people’s reactions to certain characters and moments. When it comes to Buffy the Vampire Slayer, I agree with a lot of them (season 4 sucks, Riley sucks, Kennedy sucks, Glory is the best, killing off Tara was a national tragedy), and some of them I do not (I love Dawn, Tara/Willow is not my OTP, Spuffy is my nightmare made sentient).

However, there’s always a balance of lovers and haters on most things—I’ve even met one person in real life who likes Riley—but one thing people universally dislike is Buffy getting kicked out of her house in season seven.

Well … I think she deserved it.

Now, don’t get me wrong, I love Buffy Anne Summers. I think she’s a fantastic character; she has been on the front lines of death and danger since she was sixteen years old. She’s died twice! Yet, season seven turns her into someone who is, at best, headstrong, and at worst, despotic, when helping to protect the Potentials.

For those who may not remember, in season seven, Buffy and the Scooby Gang are up against the First Evil, which is also hunting down potential slayers (like Buffy herself before her powers manifested). This leads her house to become a safe-house for the most annoying gaggle of characters ever. Kennedy. Ugh.

Throughout the season, Buffy makes terrible decisions, a lot of them motivated by her relationship with Spike, and she just becomes a colder, meaner person. I don’t know why season seven decided that Spike, of all people, was going to be Buffy’s anchor, but in doing so, it ended up weakening Buffy’s relationships with everyone else. The episode “Empty Places” even has Buffy rail against everyone and say that Spike is the only one watching her back.

Now, the thing about season seven of Buffy is that everyone is their worst selves. I may agree with Giles and the others, but everyone handles everything poorly. No one actually talks to each other; it’s just dramatic declarations, accusations, and just plain meanness. Giles going behind Buffy’s back to kill Spike is one of the worst examples.

Giles teams up with Robin Wood, the series’ 3rd reoccurring black character ever, to kill Spike. Robin wants to kill Spike, because Spike murdered his mother, former Slayer Nikki Wood. That cool jacket Spike wears, he stole it off of Nikki Wood’s dead body. So Robin has a vendetta, that makes sense. I actually find Buffy’s dismissal of Robin’s emotional pain over Spike to be frustrating, but still, it’s Giles who I expected better from.

When Buffy is right about something, it’s clouded by a series of poor choices that make the Scooby Gang, naturally, question her. Instead of exploring that, they just place them as antagonists to Buffy who are “gaslighting” her, which is unfair narratively, because we have eyes and brains.

The thing that’s interesting about season seven, in premise, is that it asks Buffy to be a leader to a group of people who don’t really want to be there. The original Scoobies signed up for the long haul—but for the Potentials, just as no one asked for them, they didn’t ask for this.

Watching “Empty Places” rev up towards Buffy’s ejection from the house is painful, because for every good point Buffy makes, there are several bad ones to cloud it.

Buffy’s plan is to go raid the vineyard where the minor bad, Caleb (played by Nathan Fillion) is lurking. The last time they tried to attack Caleb on his turf, two Potentials died, and Caleb overpowered everyone. Oh, yeah, and Xander lost an eye, too, I guess.

However, Buffy wants to go back because she thinks that Caleb is guarding something powerful there, and they need to get it. Naturally, the group does not want to go back without some solid evidence that it’s worthwhile, not just Buffy’s feelings. When Buffy says that she’s been doing this for seven years and suddenly no one trusts her, that’s a good point. Giles counters with bringing up that Buffy said that Spike is the only who has her back and maybe there is something that needs to be addressed. Buffy then asks if that’s why Giles sent Spike away, to “ambush her.”

Then it goes into a whole speech about how this isn’t a Democracy it’s a Slay-tatorship, which leads to this exchange with Anya:

Anya: “You really do think you’re better than we are.”
Buffy: “No, I …”
Anya: “But we don’t know. We don’t know if you’re actually better. I mean, you came into the world with certain advantages, sure. I mean, that’s the legacy.”
Buffy: “I …”
Anya: “But you didn’t earn it. You didn’t work for it. You’ve never had anybody come up to you and say that you deserve these things more than anyone else. They were just handed to you. So that doesn’t make you better than us. It makes you luckier than us.”

The group then votes to install Faith as the leader, and Dawn says Buffy has to leave because she refuses to “stay and watch [them] throw everything away.”

It’s an uncomfortable conversation because the show clearly wants to say something about the Slayers and Buffy as a character, and it has purposely written her in a way that she’s being an asshole, but the problem is they don’t stick the landing with this storyline. What happens after this episode, when Buffy is kicked out because of her plan? Oh, Buffy was right all along.

All the valid criticism is erased. Buffy’s lack of empathy towards people and her dependence on Spike are reinforced. It is a big nothing burger of a story, and it infuriates me. It infuriates me because Buffy is being the worst. Her plan is terrible, and why she prioritizes Spike over everyone else in her life is bizarre, but that is a story worth exploring. Buffy is in a vulnerable place so, yes, maybe she does need someone like Spike to lean on, but that’s not brought up. It’s Team Buffy or Team The Door.

Heroes are allowed to be flawed, and throughout the series, Buffy has never actively looked to put people in danger if she could take it on herself. She stood up for Angel, but not at the expense of threatening to kill another person. Buffy in season seven is not the Buffy we know and love, so she deserved to get kicked out of that damn house. I just wish the narrative actually wanted her to learn something from it.

At least we got this scene out of season seven.

What moments in Buffy: The Vampire Slayer made you rage? Any unpopular opinions? Let us know below.