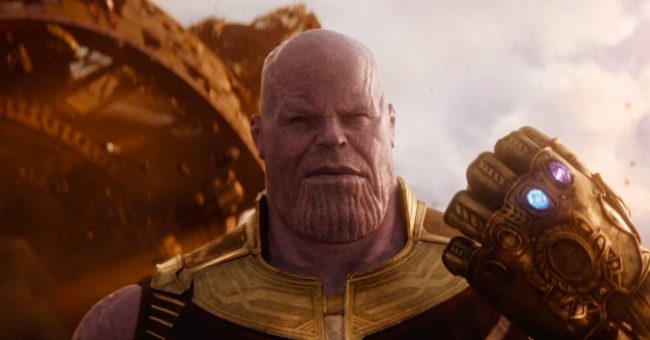 Marvel Studios president Kevin Feige knows fans are curious as to how the biggest of bads, Thanos, will hold up. Thanos has been teased since the first Avengers back in 2012, and it’s hard to predict from the little we know of Infinity War if the empurpled Josh Brolin can meet our outsize expectations. So Feige is stoking the fire.

According to CBR, Feige was recently speaking at Brazil’s Comic-Con Experience when he offered the following commentary regarding Thanos:

“Within the first five minutes of Infinity War, people will understand why Thanos is the biggest and baddest villain in the history of the Marvel Cinematic Universe.”

This is a huge promise to make and deliver on. Villains, which have been a weak spot in the cinematic MCU, usually take some time to warm up—there’s often a minor villain or dastardly plot for our heroes to foil before the biggest bad even appears onscreen. But it sounds as though Infinity War will be going for broke almost immediately. So what could Thanos do that would make such an impact so fast?

My first thought is that things are looking bleak for the ark ship full of Asgardian refugees from Thor: Ragnarok. Ragnarok‘s mid-credits scene saw Thor and Loki enjoying a moment of calm and talking about the journey to Earth, when suddenly Thanos’ massive flagship Sanctuary II bears down on them. It’s hard to imagine that the moviemakers would go through the trouble of setting that up if it wasn’t significant to the Infinity War plotline.

Since we know from the trailer that Loki has the Tesseract, which contains the Space stone that Thanos needs for his gauntlet, it would make a lot of sense to start out here. Obviously, something has to happen to make Thor leave the people he has just assumed kingship over, and later be found by the Guardians of the Galaxy. Something also gets the Hulk away from the ark ship, since we see Bruce Banner crash-landed in Doctor Strange’s house in the trailer. If the Russos touch a hair on Loki, Valkyrie, Heimdall or Korg’s heads they’re going to have to answer to me, however.

This is all speculation, of course, but obliterating a ship full of Asgardians (who just saw their whole world implode) would be wrenching, and would certainly cement Thanos as “the biggest and baddest villain” in the MCU’s history. Not to mention that everyone who saw Thor: Ragnarok will be feeling for those Asgardians (leave them alone, they’ve been through a lot), and their deaths would make a bigger impact than seeing Thanos attack a random ship or city or planet.

At the Con, Feige seemed to imply that whatever happens is going to be quite the big bang to start off the movie—after all, this has been a long time coming. “We’ve been teasing him for years,” Feige said, “and the trick is when you tease something for that long you have to deliver.”

CBR speculates that it’s possible that Thanos could kill an Avenger in the first five minutes, which would also be considerably attention-grabbing. Everyone in the MCU and their dog is in Infinity War, so if Thanos went in this direction it might make sense. We have a glut of superheroes to spare, and losing one (or more?) of these beloved characters at the movie’s start would make audiences sit up and take notice. That would also spur the Avengers and friends into action pretty damn quickly.

How do you think that Thanos can most effectively carve out a place in MCU history in a mere 300 seconds?