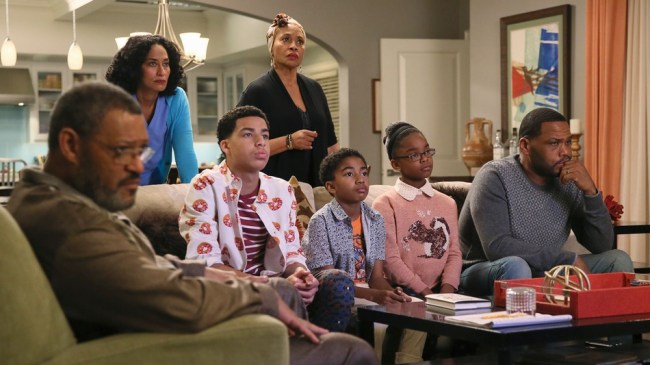 The creator and stars of the hit television show Black-ish sat on a panel yesterday at the Television Critics Association conference in Los Angeles and addressed a question regarding how important they felt it was that they had a diverse audience. At that, showrunner and creator Kenya Barris replied he was tired of talking about diversity. He said, “I will be so happy when ‘diversity’ isn’t a word. Why does it matter if black people are watching this show or if white people are? The point is that people are watching the show and they’re hearing what we’re saying.”

This question of diversity always seems to only ever pop up on panels featuring people of color. That’s a fact that one of the show’s stars, Tracee Ellis-Ross, didn’t let slip by. She turned the question back around to the reporter and asked, “How many other shows this week have you asked that same question?” The reporter said, “None,” to which Ellis-Ross replied, “Exactly.”

The show has tackled prominent issues within the black community including police violence, the n-word, and more. Barris is appreciative that he’s able to bring these issues to light while bringing black culture to the fore on major network television. On that, Barris is careful to remind people that black people are not a monolith, that there are a multitude of voices within it, all of whom deserve to be heard. “We are not a monolithic culture,” he said. “We need to allow more voices within the community to be heard and if we have love for one another, we can take those voices in and make them become something more than just words.”

While it’s important to talk about diversity, it’s equally important to view a show for its merits and what it’s able to accomplish beyond what kind of audience it pulls in or what the makeup of its cast might be. I realize we live in a world where a show lives or dies based on its audience, but when you make that the only statistic by which you judge its overall success, then that’s missing the point. It’s reductive and unfair, especially given that those questions aren’t asked of other shows. There’s a bigger conversation to be had.