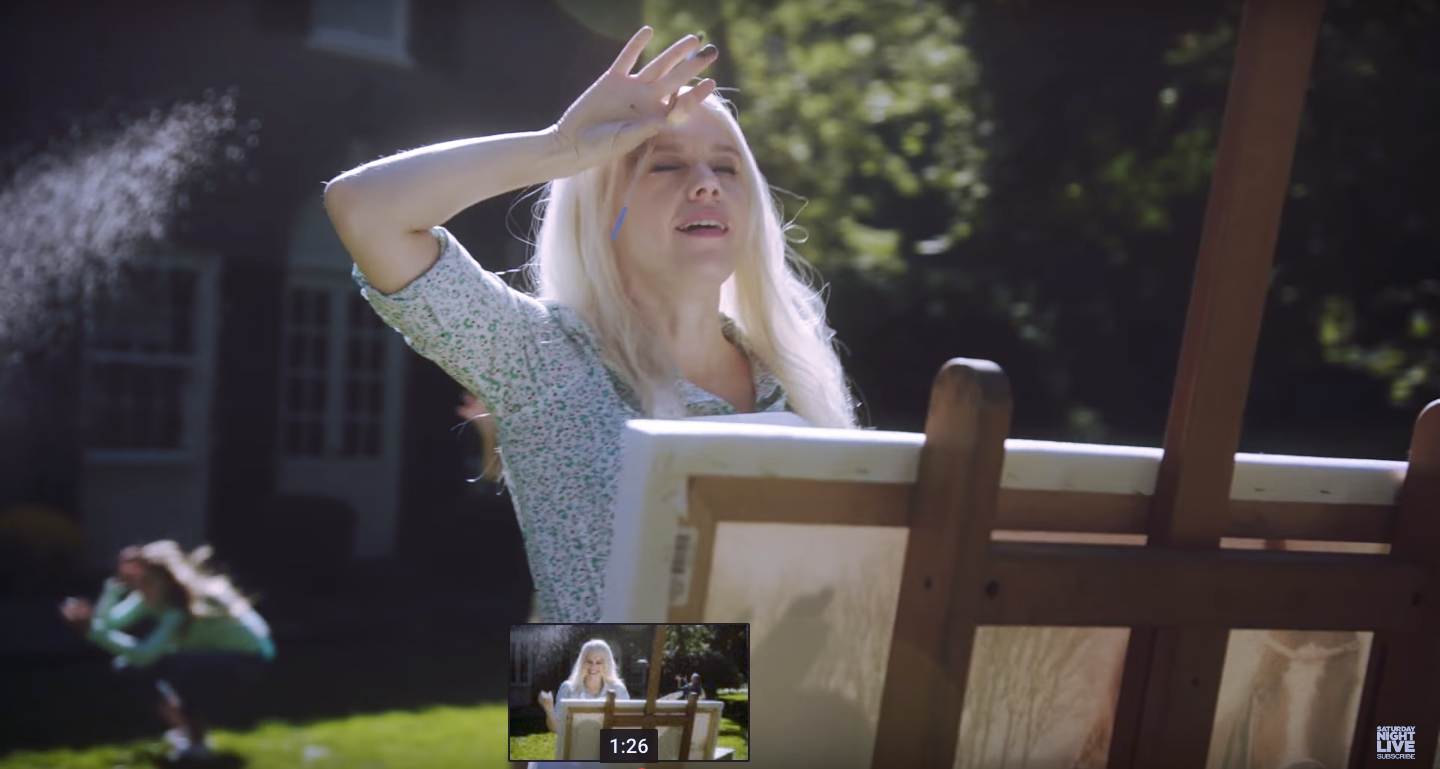 If all you know of Kellyanne Conway is what you’ve seen in Kate McKinnon’s Saturday Night Live impression, then you probably have an image of Trump’s campaign manager—and, as was announced today, official Counselor to the President—as a lightly (if shrewdly) bubbly pixie-woman. McKinnon’s character has been one of the highlights of the current hit-and-miss season, starting with the brilliant “A Day Off.”

Here we see Conway’s day off constantly interrupted by Trump’s outrageous behavior, which she excels at defending through lilting circuitous deflection.

SNL continued to bring McKinnon’s Conway back throughout the season, depicting her as a soft-spoken, almost innocent foil to Trump’s filterless aggression. While the character is consistently funny and McKinnon’s impression is spot-on in the technical sense, the choice to depict Trump’s campaign manager as a sort of emotional outsider, separate from his outrageousness—fighting it, even—is an odd one.

Now that Conway has accepted a job in the White House, making her the most powerful woman in this new administration, according to the New York Times, underestimating her power and her agenda has the potential to be dangerous. Uproxx wrote as much just after the election, describing the differences between Conway the character and Conway the person:

SNL absolved Conway of any responsibility for enabling her boss. Instead, she’s been enlisted by SNL as the straight woman in an administration full of dangerously wacky cut-ups.

This treatment of Conway is my biggest pet peeve with SNL this season. I find it absolutely mystifying, not just because I think it’s plainly dishonest, but also because it makes no sense comedically. There’s plenty of evidence that Conway is as nuts as anyone in the Trump administration. Why give her a pass?

Conway has often been referred to as “The Trump Whisperer.” It’s her job to translate Trump’s nonsense words into something resembling Presidential ideas, as we’ve seen McKinnon take on in these sketches. But just because it’s a job, that doesn’t mean she does it with the same knowing reluctance SNL seems to depict. Conway has defended Trump’s now-infamous leaked Access Hollywood tape in which he talked sexual assault, she’s defended Steve Bannon, and, oh yeah, she’s said super vile things about women.

Earlier this month at a Politico event (via Jezebel), she said why she wasn’t then considering taking the type of job she has just now accepted:

“I do politely mention to them the question isn’t would you take the job, the male sitting across from me who’s going to take a big job in the White House. The question is would you want your wife to,” Conway said, describing conversations she’s had with male colleagues. “Would you want the mother of children to? You really see their entire visage change. It’s like, oh, no, they wouldn’t want their wife to take that job.”

And that is maybe where McKinnon’s impression is the most accurate: the way in which Conway exemplifies all the characteristics we know Trump values in women. That polite, breathy upspeak, the constant smile, the insistence that she values her place in the home over her career and that the only way she has succeeded professionally is by being, as she herself puts it, “a man by day.” Here’s how the New York Times describes her:

With a soft-spoken approach that appeals to Mr. Trump, Ms. Conway was credited during the campaign, even by Democrats who opposed her, with smoothing out some of Mr. Trump’s most jagged edges in her appearances on television.

This election once again told us that that women are most accepted when they don’t frown, don’t raise their voices, and above all, don’t show their ambition. Kellyanne Conway is an incredibly successful political tactician, and I don’t want to dismiss that in any way, but it has been made clear that there is a “type” of woman that both Trump and the American people will accept, and it wasn’t Hillary Clinton. It’s the one who smiles and smooths out those jagged edges, who reinforces the idea that to be good at your job is to be a “man by day” and a woman at home.

Donald Trump announces Kellyanne Conway as “counselor to the president.” This line from the announcement stood out. pic.twitter.com/2YRI6lNTKF

(via NYT, image via SNL)