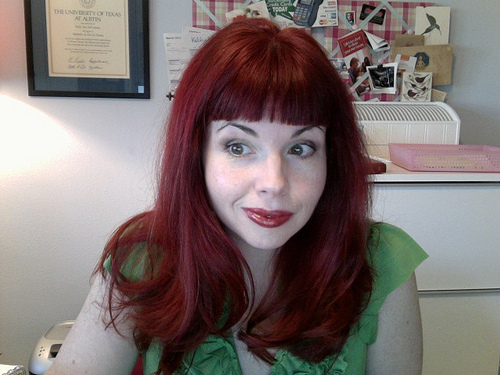 Kelly Sue DeConnick, writer on Captain Marvel, Bitch Planet, and Pretty Deadly, has been making the rounds today discussing how the comics industry has changed for the better at Salon and The Daily Beast. DeConnick’s run with Captain Marvel recently ended, but she feels good about where she left off:

I mean, the first Women of Marvel panel that I did [at a convention], I may have been like one of two creatives on that panel. I think it was in 2010, maybe? But the last one I did, there were so many people on stage I literally had to sit on the floor. There were 14 women on stage, all actively working, all creatives. I was sitting on that stage and I knew I wasn’t gonna be with Captain Marvel for much longer, and I knew that was probably my last Women of Marvel panel. And it was a little heartbreaking, ‘cause I love Carol [Danvers, aka Captain Marvel], and I didn’t wanna leave, you know? But I also knew that it just didn’t make sense anymore and I really wanted to leave while I was still welcome.

She’s reluctant to credit her own work as the reason why Captain Marvel will soon become a feature film, though:

I know there are other people, who think that, and it is good for me to think that, so I am not going to argue with them. It sounds like some weird combination between arrogance and low self-esteem, which is, welcome to my world. But I think she is the obvious choice. I think she is a really, really tremendous character. She was a tremendous character before I got her.

DeConnick credits both Wonder Woman and Carol Danvers as her own feminist icons growing up — which is why she felt baffled by readers’ anger about Danvers’ supposed “feminist agenda” and her new costume.

Carol Danvers—in 1977, she was an overtly feminist heroine. I was 7 years old. I had nothing to do with it, you know? And so I was just kind of like floored by that reaction and pissed off by it, and I thought, you know, this is not “angry feminist.” This is a very uplifting, very kind of light superhero fare. If you want to see “angry feminist,” I will show it to you. And so there was “Bitch Planet.” And in the researching of “Planet” I started to examine my own feminism and learned more about what was happening in contemporary feminism—and just getting angrier and angrier.

DeConnick has written political stories that center feminism in an “uplifting” way as well as an “angry” way — and her approach to criticism sounds pretty well-balanced, too.

There’s no win there. And also, sometimes people just don’t like things. Taste is subjective, you know? And that’s totally fine. I can’t let people send me things, either. Sometimes they mean well and it’s like, “This fucker said this bad thing, and I defended you!” I’m like, I didn’t wanna know that… (laughs)

DeConnick recently signed a development deal with Universal to work on a TV show with her husband, Matt Fraction — so that’s something to look forward to!

(via The Daily Beast and Salon, image via KellySue.Com)