Things We Saw Today: Kelly Marie Tran Stuns on the Cover of The Hollywood Reporter

She is beauty. She is grace. 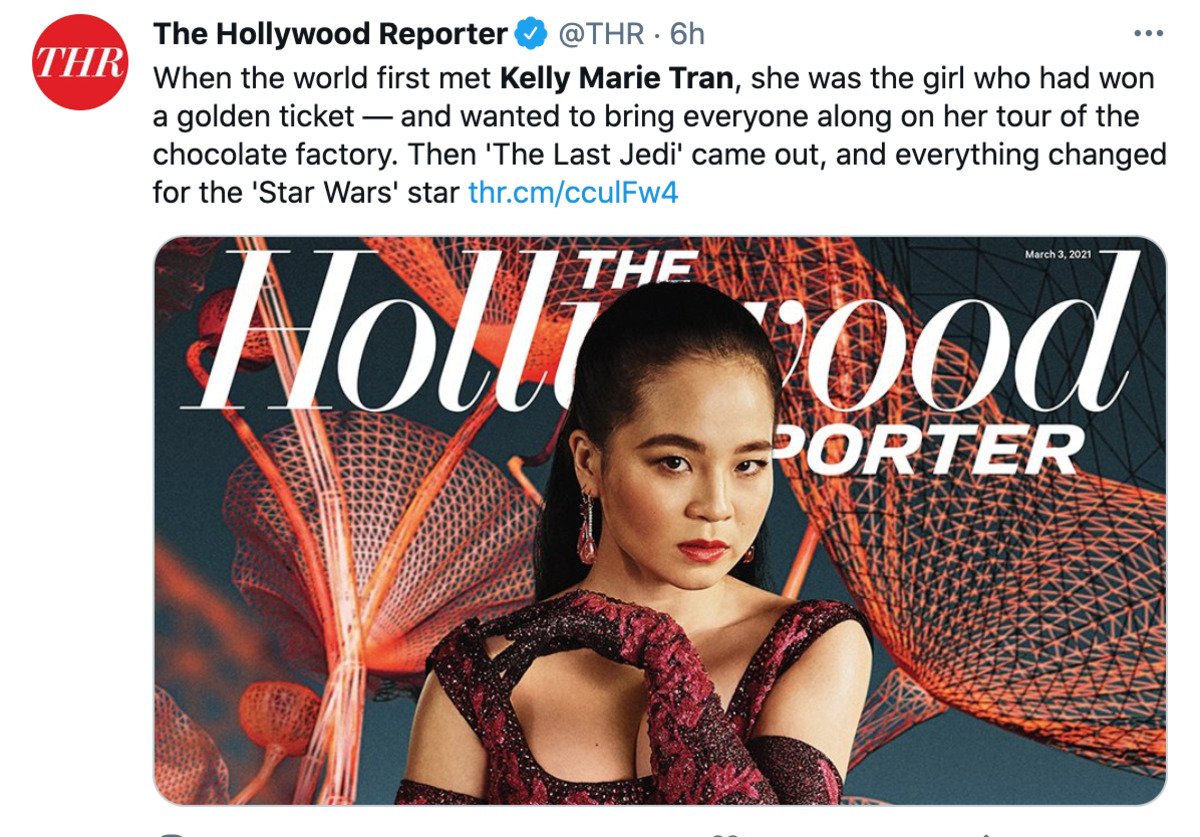 It’s Kelly Marie Tran’s time to shine and no one deserves it more. The Raya and the Last Dragon star graced this week’s cover of The Hollywood Reporter for a deep dive with her all about the triumph that is Raya, and how her outlook on Hollywood and the world changed after she was the target of racist and sexist internet harassment from Star Wars fans following the release of The Last Jedi.

Having seen the worst side of people and persevering in a broken world is something Tran very much has in common with her newest role as Disney’s first Southeast Asian princess in Raya. “[Raya] sees the world in this doe-eyed idyllic way, and then the world sort of breaks, and it changes the way in which she interacts with the world,” Tran explained. “That was my way [into the character]. I’ve definitely in the past viewed the world through rose-colored glasses, and now I feel like I’m in the back, smoking a cigarette, [saying], ‘I’ve seen things.’ ”

In the interview, Tran opens up about how she stepped back from everything after The Last Jedi fallout, turning to friends, therapy and simply listening to herself, rather than what others were pushing her to do and be. “I left. I said no to a lot of things,” she explains. “It felt like I was just hearing the voice of my agents and my publicity team and all of these people telling me what to say and what to do and how to feel. And I realized, I didn’t know how I felt anymore. And I didn’t remember why I was in this in the first place.”

Since then, Tran has found a great deal of peace away from social media and doesn’t think she’ll return. “We can talk about the interaction between mental health and social media, but also mental health and this idea of fame and what it does to you. It is not normal. For me, that navigation is about how I protect myself in a way where I can continue to work in this world, and continue to lift the stories that I feel like the world needs to hear.”

The full, in-depth cover story featuring Tran is available at The Hollywood Reporter, but she’s also spoken this week with Vanity Fair and many more. We can’t get enough of Kelly so we’ll be reading all of them, and we think you should, too!

Kelly Marie TranRaya and the Last Dragonthings we saw today