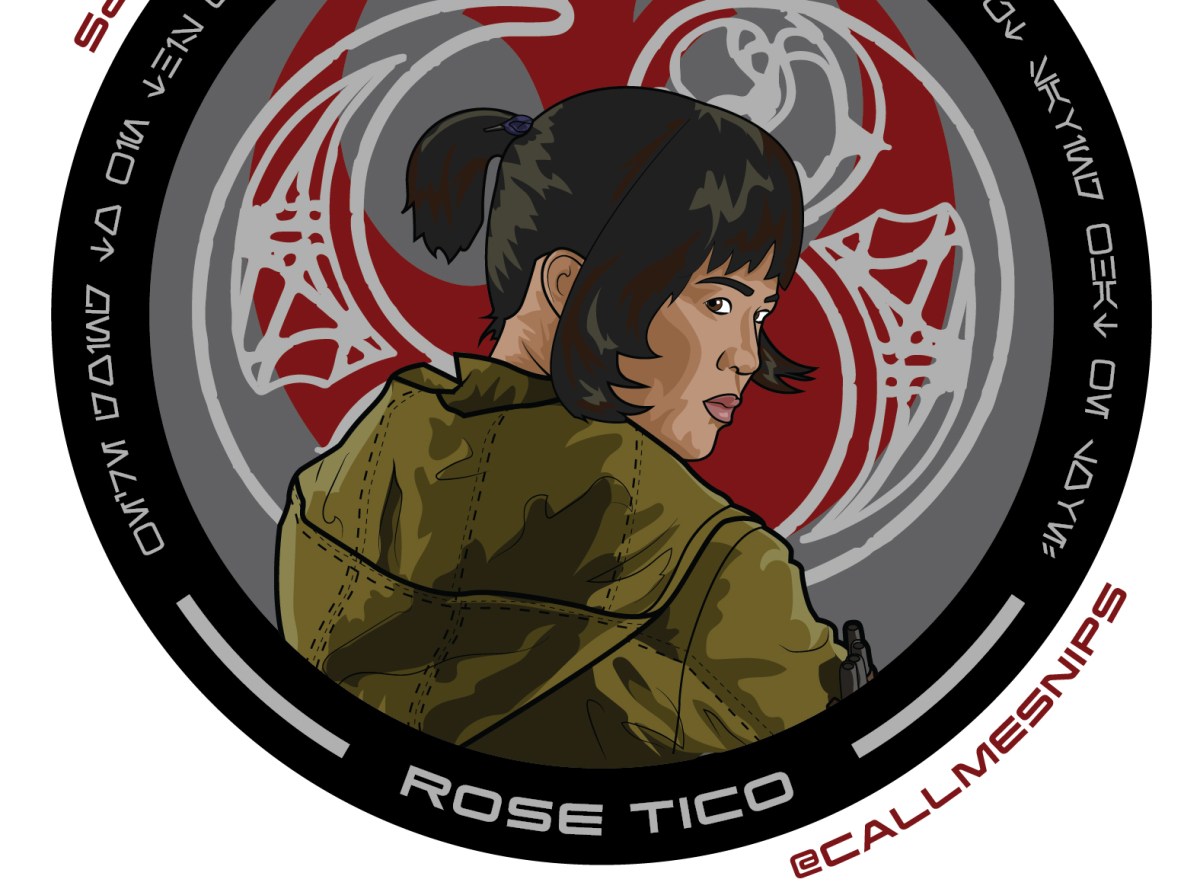 Not so long ago, on social media not so far from here, the dark side of the Force was in full effect. The Last Jedi breakout Kelly Marie Tran, who played the movie’s Rose Tico, suddenly deleted her Instagram due to racist trolls and haters who spammed her with awful comments. Celebrities and fans rallied to support her, taking to Twitter with hashtags like #FanartforRose, but one fan—and member of the costuming charity group Rebel Legion—decided to step up and prove that she’s a hero worthy of standing next to Rose, Finn, and the rest of the Resistance.

Chelsea, who goes by the username Forever Song Cosplay on Instagram and Facebook, first joined the Legion in 2017 as a Rey cosplayer, and has been a Star Wars fan ever since her father first showed her the movies when she was a young girl. In the weeks leading up to The Last Jedi, she became the first Legion-approved Rose Tico cosplayer, which led to a powerful viral moment when she attended the red carpet for the film in costume and was seen by Tran.

“It was extremely emotional and surreal! Honestly, I was just trying really hard not to be some crying fan, but then she runs up to me, collapses into tears, and I can feel my eyes burning. It was a powerful moment!” Chelsea told me in an interview.

“Her joy was so genuine and real, and the gravity of that moment was not lost on me at all. I worked extremely hard on that costume because I wanted her to see my excitement, and frankly, the excitement of all the people in the Asian American community I spoke to about Rose, and really show her how important she was to us. I wanted her to feel supported in this position of being the first Asian woman in a leading role in Star Wars when seeing me there dressed as her character. “

I’ve spent a lot of time leading up to the Last Jedi release, and in general, talking about representation and how meaningful it is for people of color to see themselves represented in ways that are honest and nuanced—to be more than just some stereotype, and have a chance to properly exist in the cinematic worlds we know and love, too. So when Kelly’s character was first announced, I was beyond excited. I literally cried because I saw a photo of her holding a bunch of her Rose Tico toys all excited!”

She was doing this thing that was unprecedented, and as a woman in the entertainment industry myself, I really connected with that, and it gave me hope and inspiration. Then, I made it a real point to do that costume and claim this moment for my fellow Asians, the women in particular, because we finally have someone who represents us. And in sharing that incredible experience on social media, I was overwhelmed by how many people resonated with this feeling and recognized its power. I don’t take it lightly at all.”

In the week after Tran left social media, Chelsea was inspired by art that a fellow Rebel Legion member, McKenna Fellows (an Ahsoka Tano cosplayer who goes by the handle @callmesnips on Instagram), created to spread support. She turned the art into a patch and put out a call for those who would be interested in purchasing one. She readily admits that she wasn’t entirely sure how her creation would be received.

“I came into this unsure we’d even reach 100 patches ordered, since I’m no campaign manager or social media superstar … but we hit 200 orders in less than a week. And those orders came from all over, even outside the U.S., so it had some reach! People have really come through, and I’ve gotten some very positive messages, so it’s been incredible, and I’ve just been blown away.”

Today my #wcw goes to @kellymarietran. I’m so heartbroken about what has happened to her. 😞 I decided to make this to show that she still has support from Star Wars fans. Whether you liked Rose and TLJ or not, Kelly is an incredibly talented and kind young woman and those who harassed her should feel ashamed. There is no place for hate in Star Wars. #istandwithkelly #kellymarietran #istandwithtran Feel free to share this in support, I just ask that you leave my tag for credit. #starwars #starwarsthelastjedi #tlj #kellymarietran #rosetico @starwars @hamillhimself @johnboyega @riancjohnson #savewhatyoulove #fanartforrose

Proceeds from this patch run will not be going to her pocket. Chelsea will donate the money to two separate charities. One, Crash Override, supports victims of online harassment and abuse. The second, The Center for Asian Pacific American Women, focuses on helping Asian women leaders grow through networking, education, and mentorship.

“I couldn’t simply ignore that much of the hate that went Kelly’s way was very racist, and how whenever the status quo feels threatened by new players entering the field, they chalk it up to imaginary ‘diversity quotas’ or some ‘agenda.’ as if Kelly had not actually earned her place, which is completely absurd, because she absolutely earned it,” said Chelsea.

“I can’t talk this talk about representation and do nothing to recognize this part of the narrative. So … half of the proceeds is to support our future pioneering Asian women like Kelly Marie Tran. I thought it was important to support something that tackles the present state of things, as well as something that is forward-looking. “

The Star Wars fandom has become notorious for its more toxic segments, often those who feel that the films have become too “politically correct.” Trolls drove Daisy Ridley off Instagram in 2016 and have been relentless in targeting John Boyega with hate since he first appeared in the teaser for The Force Awakens. Tran’s instagram was full of hope and empowering messages for young women from all walks of life; to see her driven away by a relentless stream of bigotry is beyond disheartening, especially in a franchise that is centered on hope and goodness.

Yet, it is fans like Chelsea who prove that there is still good amidst all the hate. As of this writing, she has raised over $1000 for charity through her patch run, which is now closed. She hopes that this will help inspire other fans to fight the good fight, instead of just sitting by the sidelines.

“I hope people, going forward, recognize toxicity and hate in the early stages, and will actually work to combat it before it’s too late. Before people are forced off social media or whatnot. Before people are caused pain. Sure, trolls exist, but I actually think it’s less about trolls than it is about reactionary people who resist and hurt people they don’t understand,” she said as we concluded our interview.

“And people who feel like they have a right to say whatever they want without consequence. Who cares about other people’s feelings, right? More compassion and a consideration for others would be amazing. And hey, if people could, I don’t know … just have fun with their fandom instead of taking it so seriously? Yeah, that could be kind of neat!”