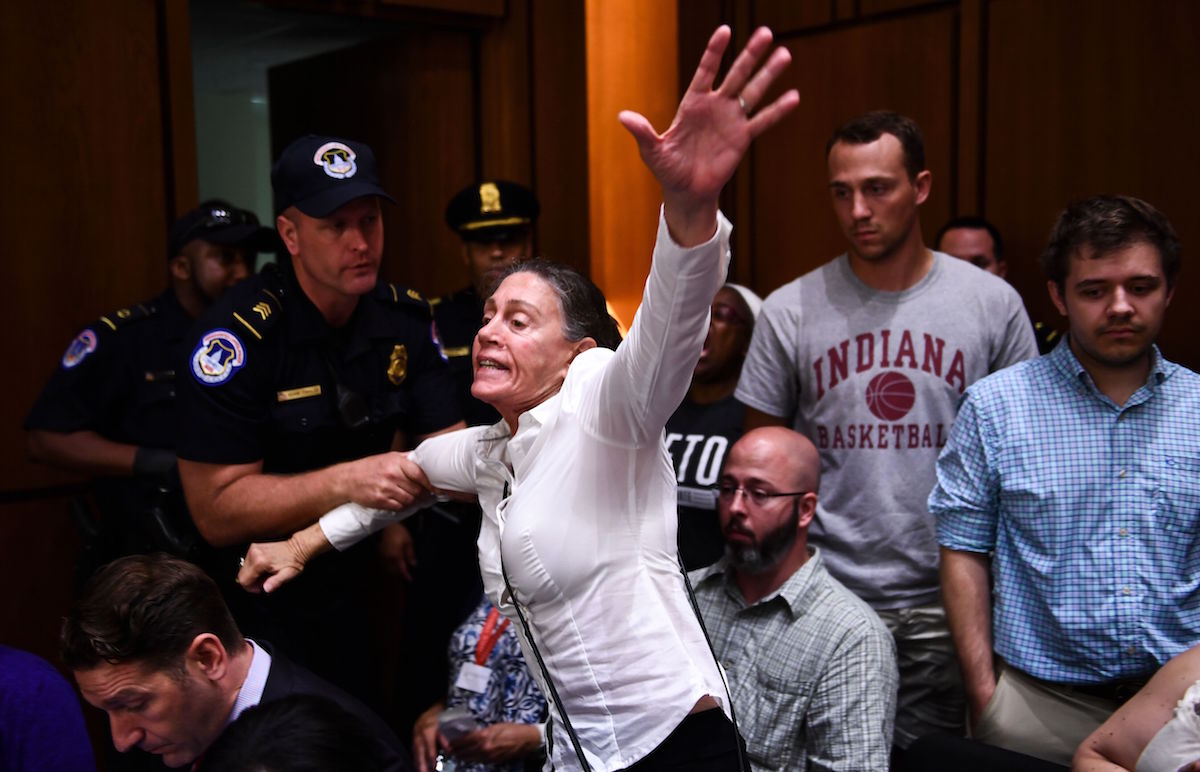 The first day of Brett Kavanaugh’s Senate Supreme Court hearing saw a huge number of protestors, both inside and out of the hearing room. Outside, protestors gathered and women dressed as Handmaids stood as a silent symbol of the regression Kavanaugh poses to women’s bodily autonomy. Inside, 70 protestors were arrested for disrupting the hearings as they stood and yelled their opposition to Kavanaugh’s appointment.

I disrupted the Senate Kavanaugh hearings this morning because Trump is an unindicted co-conspirator in a felony criminal investigation & shouldn’t be allowed to nominate a Justice, til that is resolved. Esp Kavanaugh who believes a President is above the law.#StopKavanaugh https://t.co/wU7wJvlh6W

The senators giving their opening remarks had a range of reactions to the protests. It clearly annoyed and distracted Orrin Hatch (R-Utah). Dick Durbin (D-Illinois) called it “the noise of democracy.”

But on the second morning of hearings Tuesday, the sounds of protests were noticeably absent. Journalist Lisa Desjardins shared a photo explaining why.

NOW: Police and staff are keeping all seats for the public empty. No more public inside. There is a line outside, unclear if this is temporary.

This is why you hear no more protests. pic.twitter.com/ZMOzwvUYU7

Typically, a certain number of passes are given to members of the public who wish to attend the hearings. Yesterday, there were reportedly 48 passes given out at a time. The passes are for a limited amount of time in order to let in as many people as possible during the course of the day. But today, the public was kept out of the room for much of the day. (It appears passes are now being distributed going into the afternoon segment of the hearing and protestors are again present in the hearing room.)

To shut the public out of the hearing room is only another barrier to the kind of transparency protestors and Democratic Senators alike are calling for. Democrats have repeatedly asked for the hearing to be postponed until Kavanaugh releases all of his records and the Senators have time to review them.

(Republicans disingenuously praised Kavanaugh for the “unprecedented” number of pages he released, ignoring the fact that they were released mere hours before the hearing started. There are also a few “formative” years missing from those records, during which time Democratic Senator Leahy has now suggested Kavanaugh may have engaged in some illegal activity regarding stolen emails. Check out this thread for more of an understanding on that.)

Protestors are opposing the lack of transparency in Kavanaugh’s hearing, as well as the fact that he would be appointed by a president currently undergoing an investigation. Senate Republicans are rushing through this confirmation hearing in a way that does not seem befitting the importance of the position.

And, of course, protestors are protesting Kavanaugh’s specific positions.

Kavanaugh continued today to refuse to answer direct questions about his stance on Roe v. Wade, instead repeating the same line about having supported the ruling as a lower court judge because it was “established law,” which means absolutely nothing to a Supreme Court Justice, since they’re in the position to set–or reset–what is established law. He also pointed to his relationship with his family and his history hiring female law clerks as if that has anything to do with his stance on abortion.

“To this point about Brett Kavanaugh being a good father, and he coaches basketball…what does that have to do with my bodily autonomy?”

We love equal representation too, but hiring women hasn’t stopped Brett Kavanaugh from ruling against our basic freedoms. #StopKavanaugh pic.twitter.com/alzYywmhw6

Listening to Kavanaugh congratulate himself on hiring a majority (by one) of women law clerks should enrage every woman who has needed birth control or abortion in order to build her career.

70 people–mostly women–were willing to stand up and be arrested for the opportunity to make their voices heard yesterday. The Capitol Police have the right to remove and arrest protestors, but to deny the American people access to their elected representatives cannot be an acceptable response to protest.