The FBI Investigation Into Kavanaugh Is Done & It Was Officially Worthless

Plus, Donald Trump keeps managing to find a new low. 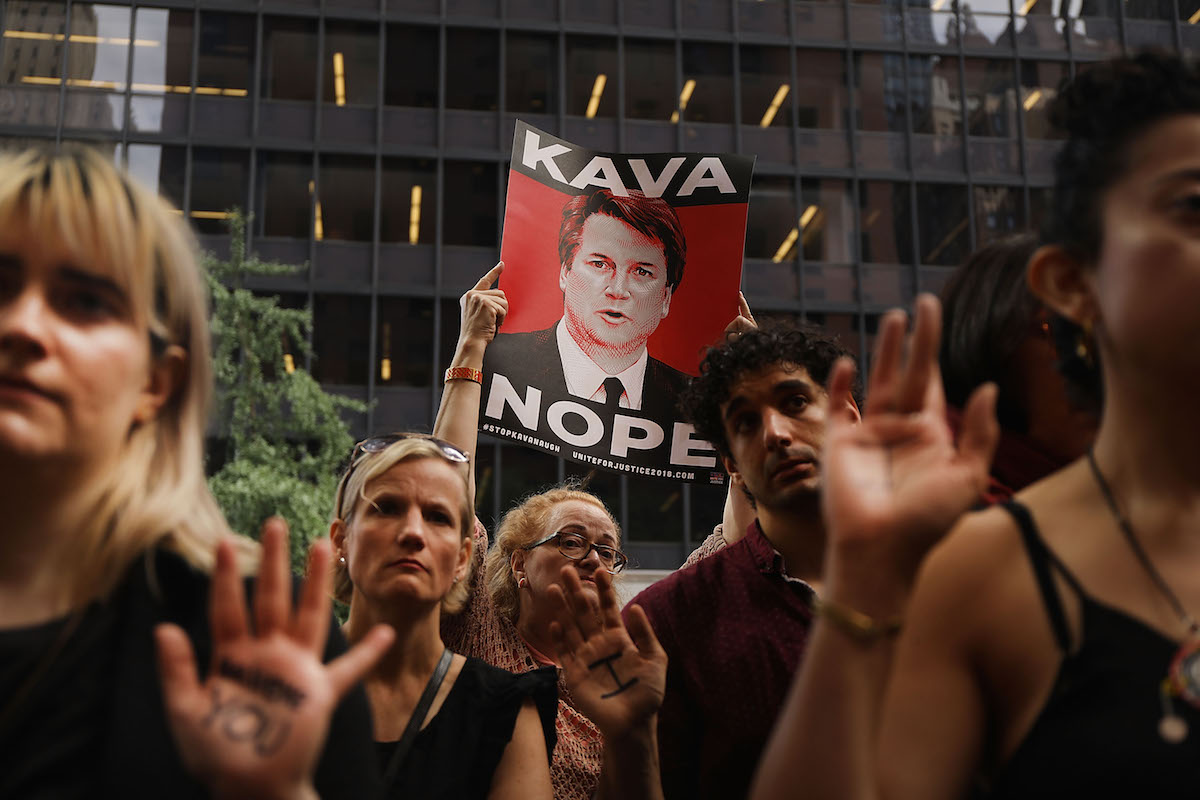 The FBI has officially concluded its investigation into the allegations of sexual misconduct against SCOTUS nominee Brett Kavanaugh. The organization has turned its report over to the White House, which has reportedly seen no corroborating evidence of the allegations made by three different women. This is not a final decision, only their opinion, and what will really matter is what the Senate decides.

That’s not off to the most promising start, though. The majority party tweeted out a statement saying that nowhere in any of the FBI investigations “was there ever a whiff of ANY issue—at all—related in any way to inappropriate sexual behavior or alcohol abuse.” Democratic senators have sent a letter to Republican senator and Judiciary Committee chair Chuck Grassley, saying that statement is false.

“While we are limited in what we can say about this background investigation in a public setting, we are compelled to state for the record that there is information in the second post that is not accurate,” the letter states. “It is troubling that the Committee Majority has characterized the information from Judge Kavanaugh’s confidential background investigation on Twitter, as that information is confidential and not subject to public release.”

Even more upsetting, it’s been revealed that the investigation into accusations made by Dr. Christing Blasey Ford did not include interviews with Ford, Kavanaugh, or more than 40 other people who might have relevant information regarding Ford’s allegations.

Per @CNN, Dr. Christine Blasey Ford’s attorneys have confirmed that the FBI concluded its investigation without interviewing Ford, nor the witnesses who could corroborate her testimony. So as expected, it was a sham investigation to give Republicans cover to vote for Kavanaugh.

“I feel like I’m being silenced.” The FBI declined to interview primary witnesses related to the Kavanaugh allegations it was tasked with reviewing. Some of them resorted to sending in unsolicited sworn statements, which @JaneMayerNYer and I obtained: https://t.co/nY1uGCQ2Ki

Here’s everyone the FBI did not interview about the sexual-assault allegations against Brett Kavanaugh https://t.co/ij7tvPhbBS

There have been numerous reports over that last week that the White House placed strict limitations on the scope of the FBI’s investigation, though the WH has denied that’s true. Either way, it’s not surprising that this is the view of Trump or the Republicans on the Senate Judiciary Committee.

Those Senators have made it clear that they’re going to confirm Kavanaugh no matter what, with Senate Republican leader Mitch McConnell promising to “plow through” the allegations and confirm Kavanaugh anyway, before anyone ever even testified. They’ve leveled the accusation that Democrats’ support of Dr. Ford is just another partisan tactic to keep Kavanaugh off the bench, rather than ever considering that the allegations against him could be a valid reason (not a political reason) to disapprove of him as a nominee, even though there are plenty of other conservative judges with equally objectionable views (a bonus, as far as Republicans are concerned) who wouldn’t face the same criticism. (To say nothing of the partisan attacks and aggressive temperament Kavanaugh showed when questioned.)

As for Trump, I need to stop thinking he can’t stoop any lower. It’s not that I have faith in him; I just keep thinking the bottom itself can’t get any lower. And then it does.

At a rally on Tuesday, Trump mocked Dr. Ford for not being able to remember specific details of the night 35+ years ago when she says Kavanaugh tried to rape her.

“What neighborhood was it in? I don’t know. Where’s the house? I don’t know. Upstairs, downstairs, where was it? I don’t know, but I had one beer. That’s the only thing I remember,” he continued, as the crowd laughed and cheered. It’s true that Ford admitted not remembering all the details of that night. A combination of time and trauma has an ability to muddy some details, though it’s shocking how many people can’t seem to understand that, and why other details may remain clear as day.

Ford said during her testimony, “I truly wish I could be more helpful with more detailed answers to all of the questions that have and will be asked about how I got to the party and where it took place and so forth. I don’t have all the answers, and I don’t remember as much as I would like to. But the details about that night that bring me here today are the ones I will never forget. They have been seared into my memory, and have haunted me episodically as an adult.”

That’s a sentiment he’s expressed before. Earlier that same day, he told reporters at a news briefing, “I say that it’s a very scary time for young men in America when you can be guilty of something that you may not be guilty of. This is a very difficult time.” When asked what message he had for young women, he replied, “Women are doing great.”

By mocking Dr. Ford, Trump is mocking every survivor of sexual assault–everyone who was scared to come forward because they didn’t think they’d be believed, everyone who held onto their trauma for years, everyone who knew they would be making themselves vulnerable to this sort of disgusting treatment.

The backlash against Trump has been fierce.

President Trump’s mocking of Dr. Ford is offensive. Dr. Ford bravely came forward to recount being sexually assaulted. She deserves to be heard and respected, not mocked.

CHeck out the tapes from NBC of Trump going after Ford in front of a rabid crowd. This man is repulsive scum and this country’s destiny depends on getting rid of him and his party as soon as possible. VOTE

“I don’t have any problem stating facts,” Sarah Sanders tells CNN’s Jim Acosta. “I know that’s something you probably do have a problem with.”

As for whether Trump’s treatment of Ford or the limits of the sham investigation will have any effect on the Senate vote, that remains to be seen. Potential swing votes Susan Collins and Jeff Flake (the latter of whom was the Republican to push for an investigation) have both said they’re content with the results, despite Flake specifically saying he wanted a serious investigation, rather than one to serve simply as cover, a statement that also seems to have been more about providing cover than anything else.

Everything is terrible, but at least here’s Lindsey Graham getting booed for saying Kavanaugh was treated “like crap”:

Booed by the audience when he says Kavanaugh “was treated like crap,” Sen. Lindsey Graham responds, “Yeah, well boo yourself.” pic.twitter.com/Ns6dNPCSk4

Here’s your regular reminder to call your senators, especially if you’re in a state with a potential Republican swing vote. I’ve heard from a lot of people who are waiting until after he’s appointed to express their anger, but once he’s on the bench, no amount of protest will lead to his removal. It takes less than 5 minutes to make your voice heard.

Here’s a *short* thread on how to CALL YOUR SENATORS, esp if you’re in Alaska, Maine, West Virginia, North Dakota, or Arizona: phone number + what to say + how to find in-state numbers if you can’t get through.#CancelKavanaugh https://t.co/YdN4CbPqxK