Katy Perry Doesn’t Quite Get Allyship, Discusses How Much “Clapbacks” Hurt 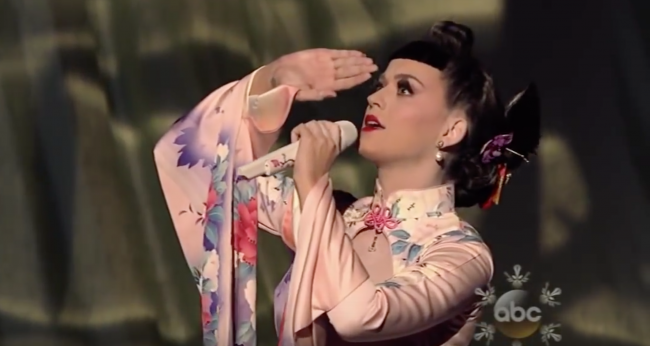 Katy Perry was recently interviewed by DeRay Mckesson for his Pod Save the People podcast, and in this two-minute video clip, she tries to come out and say that she’s trying her best to be a good ally. She makes mistakes, however (and I mean boy does she), and in her description of how people have educated her about her mistakes, she misses something that, in all honesty, gets taught in some very basic Allyship 101-level courses, so to speak.

Perry said, “I didn’t know that I did it wrong until I heard people saying I did it wrong. And sometimes that’s what it takes, it takes someone to say, out of compassion, out of love, ‘Hey, do you … this is where the origin is, you know? And do you understand?’ And not just like a [claps] clapback, you know? Because it’s hard to hear those clapbacks sometimes, and you want to … your ego just wants to turn from them.”

Can you spot the problem here?

First, some context: in this instance, Perry is referring to her “geisha-inspired” performance at the American Music Awards in 2013. It was held by many as yet another stunning example of cultural appropriation, which runs rampant throughout pop culture and music. She’s also come under fire for donning cornrows and eating watermelon in her 2014 “This Is How We Do” music video, which is yet another strike against the music artist.

While it’s great to acknowledge your mistakes and say you’re learning from them, it’s a completely different thing to criticize the “clapbacks” and talk about how much they might hurt you. Let me say it right now: I’m not criticizing Perry for saying that she’s trying to learn. That’s wonderful, that’s important, as an ally.

But what’s more important is that as someone who is trying to be a good ally, it’s critical you understand that the people you hurt do not have to teach you about how and why you hurt them. In not so many words: it is not our job to educate you. Part of being a good ally is educating yourself in the aftermath of a mistake. It’s acknowledging that you’ll inevitably make a mistake (because you don’t know what you don’t know) while at the same time promising that you’ll learn from it when it happens.

You do not get to pretend you are the victim here and talk about how much those “clapbacks” hurt, and you damn sure don’t get to criticize the people making those remarks while praising those who have the patience and grace to educate you about your (repeated, sustained) misguided actions.

Think about it: you possess privileges that afford you the kind of platform where you can do incredible things (or fall on your own sword), and you possess privileges that allow you to go through a lot of life unfettered. To come out and more or less say that people shouldn’t voice their hurt feelings or clapbacks—and thus by extension say they should only ever have “compassion and love” to educate you—is not only incredibly demanding of marginalized folks. It’s downright insulting.

For any decent human being, hurting somebody emotionally—whether intentional or not—eventually sucks for all parties involved. That’s fine. That’s the human condition. But in placing your pain over the pain of those you’ve harmed, you show that you’ve actually learned nothing from the (undoubtedly exhausted) people who have ostensibly taught you about how your actions harm others.

The “compassion” and “love” that so often gets bandied about in conversations like these refer to things that exist between two parties that offer them mutually. But when you repeatedly appropriate people’s cultures and then criticize the reaction of those you’ve harmed, it’s clear that you hold no such feelings for anybody else involved.

In other words: how can you possibly expect compassion and love in return when you don’t offer it yourself?