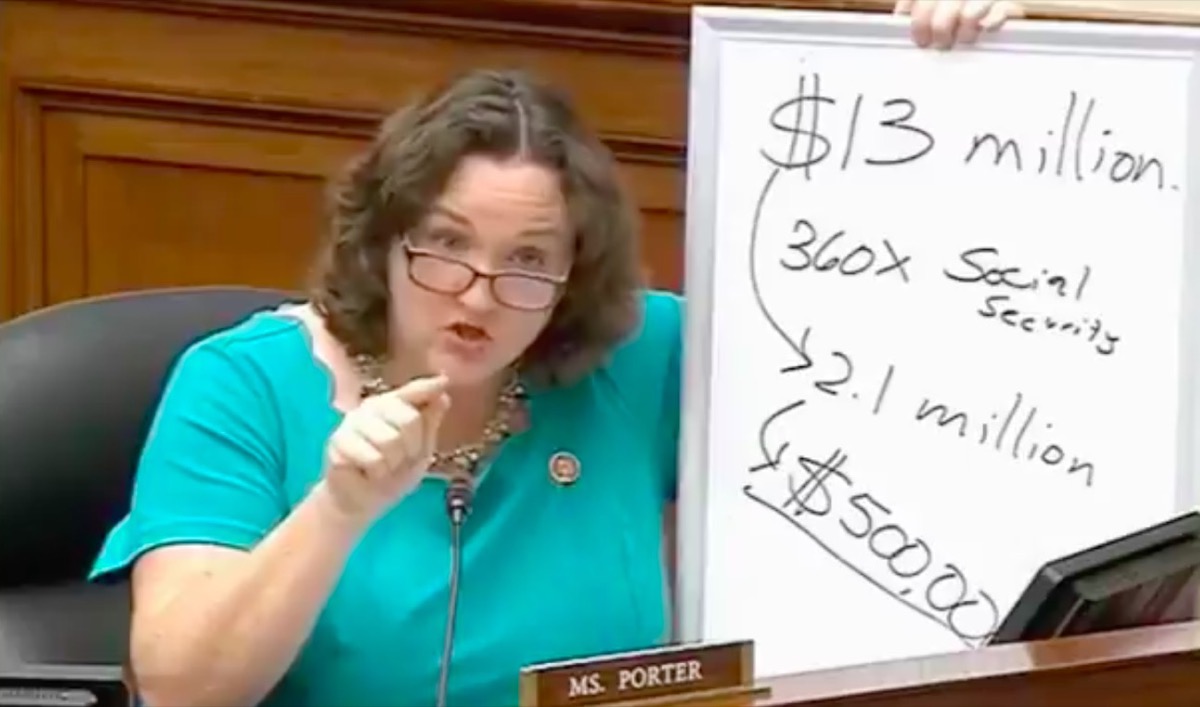 Mark J. Alles, who testified today at a U.S. House of Representatives hearing about drug prices, is the CEO of Celgene, and he made $13 million in one year (2017) by raising the price on Revlimid, a chemotherapy drug to reach his company’s yearly revenue target (which earned him a $2.1 million bonus). And he’s currently at a net worth of over $28 million.

What’s funny about this information is that even just that $2.1 million dollars is way more income than anyone should have. Like, I think about having that much money and feel like I’d just Scrooge McDuck my way into a pool, and that’s after donating a good portion of it to charity. So … what is Mark J. Alles even spending $13 million on in one year?

Don’t worry, Katie Porter took him to town. A U.S. Representative for the state of California, Porter pointed out to Alles that he earned that money (and his bonus) by price-gouging cancer medication, and that his salary is 360 times higher than that of what senior citizens get on social security on average—you know, the people who would potentially need Revlimid the most.

The video, which has now gone viral on Twitter, shows the power that Katie Porter has and her willingness to go head to head with those who are benefiting off of American citizens without regard for how said citizens are going to survive (or pay for their necessary medication).

But what it also does is show us exactly how we should be dealing with all these CEOs. From Jeff Bezos to men like Elon Musk and Mark J. Alles, all these men in power are benefiting from a system that lets them use capitalism to their advantage and gives them the ability to, for lack of a better phrase, screw over the American consumer in order to line their own pockets.

So what should we do when it comes to men like Mark J. Alles and their $13 million salary? We should call them out. Sure, he did reach his yearly profit goals for Celgene but he did so by ripping off the American people. Like Porter points out in the video, the drug was not made better. Nothing changed about it. He just made it more expensive so that his company (and his own bank account) could reap the benefits.

I now want to see more of this. I want to see more representatives calling out big corporations for this and pointing out that the American people are suffering because of men like Alles. And I want more people like Katie Porter there to call out what needs to be addressed.

Kudos to Katie Porter, and I cannot wait to see where her career in politics take her. Let’s get more Katie Porters in this world and less Mark J. Alleses, shall we?