Review: Kate Mulgrew Bares Her Heart in Her Memoir Born With Teeth 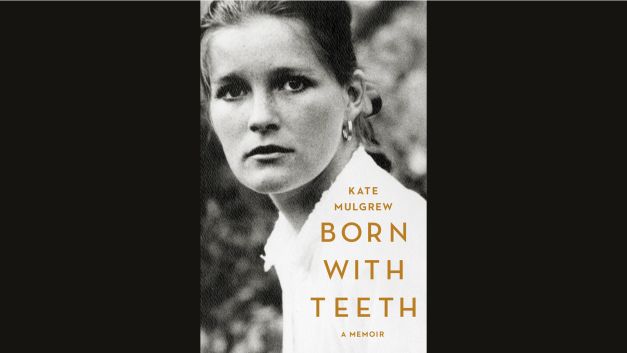 Reading Kate Mulgrew’s forthcoming memoir, Born With Teeth, feels less like reading a book and more like connecting with a new friend.

Right from the first line — “I started out in a green house with a red door in a small town, where mysteries abounded.”—you’re invited to share Mulgrew’s story in a way that feels very intimate.

The overarching theme of Born With Teeth is the importance of “the work” (acting) to make it through the most difficult times in life. For Mulgrew, these difficult times included living through siblings’ deaths, relationship upheaval, sexual assault, and the excruciating pain of giving her daughter up for adoption when she was twenty-two.

Over the next two decades, though haunted by the decision to give up her daughter, Mulgrew experienced friendships as true and love affairs as passionate and stormy as any of those she acted out in the theatre, TV, or movies. She had two sons with her first husband, got divorced, and struggled to balance her role as a mother with her job as a professional actress, working long, long hours as Captain Janeway on Star Trek: Voyager:

“I played Captain Janeway in an era that had not resolved the conflicts surrounding mothers and work. The major studios were still struggling to present their actresses as superwomen. No one wanted to hear about the difficulties of raising children. Not really. It was only acceptable to talk about rising above these difficulties and managing to do everything well.”

I have seen Kate Mulgrew at two Star Trek convention appearances. The first time, at Star Trek Las Vegas in 2013, Mulgrew appeared on stage with William Shatner, where the two traded hilarious verbal barbs, like they were professional insult comics. The next year at the same convention Mulgrew appeared with some of her Voyager co-stars: Ethan Phillips (Neelix), Tim Russ (Tuvok) and Garrett Wang (Harry Kim). With her co-stars she didn’t lose the sense of humour she had shown with Shatner, but we also got to see a deeply caring and empathetic part of her as she caught up with Phillips about his Broadway role, complimented Tim Russ’ teenage daughter, and patiently and humbly answered audience questions.

You get to understand both of those sides – the side with teeth as well as the deeply caring side – in Mulgrew’s memoir.

The book wraps up on an optimistic note near the end of the run of Voyager, which might be a disappointment for those who were hoping to read Mulgrew’s thoughts on playing Red Reznikov in Orange is the New Black. Actually, Mulgrew doesn’t spend a lot of the book talking about Voyager, either. There are really only a couple of very brief anecdotes about other cast and crew-members, as well as Mulgrew’s remembered frustration caused by the need to perfect Janeway’s hairstyle:

“I was spun around in the chair and a coven of hairdressers wielding scissors, pins and hairpieces went to work, furiously converting my head into that of a futuristic captain who might exude an effortless command but who was, nonetheless, a lady.”

I wanted to read the book to find out more about what Mulgrew thought of Captain Janeway, who was one of my childhood role models and maybe my first feminist icon. I wanted Mulgrew to dish on her friendships or antagonisms with cast and crew and talk about whether she thought her character was particularly well or ill-served in certain episodes.

I didn’t get that, but what I got was better. I got to dive into the soul of a woman who throws herself head-on at opportunities, who follows her heart, who endures immense pain but channels it into her work and survives – not a ’90s TV superwoman, but a real woman sustained by family, friends and immense courage.

I got to feel deeply inspired in a way I haven’t felt in a long time, in the same way I felt at age 10 watching Kate Mulgrew as Janeway vowing to get her crew home.

P.S. Kate Mulgrew isn’t coming to my city on her book tour, but maybe she’s coming to yours! Check out the list of dates and locations at Mulgrew’s fan site totallykate.com.

Jarrah Hodge is a feminist blogger from Vancouver, B.C. She runs the feminist blog gender-focus.com, and analyzes Star Trek from a feminist perspective at trekkiefeminist.tumblr.com. She also has a new podcast, Women at Warp! You can find her on Twitter @jarrahpenguin.