And she breaks them again by Tweeting the very first picture of her and Matt Smith together in character. Dammit, Karen Gillan.

Gillan told the crowd at a Sci Fi Expo panel that “I was so happy” to do the “Time of the Doctor” cameo, in which Amy Pond got to say goodbye to her Raggedy Man moments before his regeneration. “My agent phoned me and said, ‘They want you to come back to Doctor Who, and I was like ‘Yes!’ immediately. I think part of the reason that Steven Moffat wrote me into that scene was just so that Matt [Smith] would have me around for his regeneration. And that was the nicest part for me, just to watch him do that, his final moments in the character.”

Fans of Eleven and Amelia, are you not sad enough yet? Have at you:

“It’s so weird just watching from the outside all of a sudden. I was thinking ‘This is their TARDIS now’. Then seeing [Peter] Capaldi walk in the studio was funny because it was really dark inside and light outside so when he walked in the first time he was just this silhouette. I was like ‘Oh my god!’ as he came towards us dressed in the Doctor’s clothes.”

I’m pretty sure that’s just how Capaldi enters places. And there is a bit of humor to round out the emotion of the more soul-sucking variety; both Smith and Gillan, before the Christmas special aired, shaved their heads for movies. As such, they were both wearing wigs, and Gillan “keep[s] imagining that scene but with both of us bald!”

And, back into nostalgia territory, here’s that picture of Gillan and Smith I mentioned. Gillan Tweeted it, along with the caption “1st pic of Matt and I in character was released 4 yrs ago today, but, I have the real one..from the 1st camera test.” 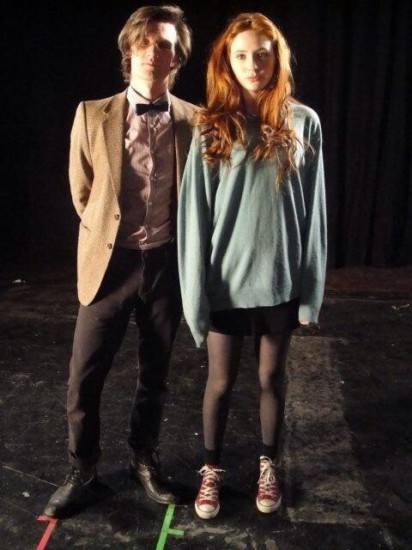