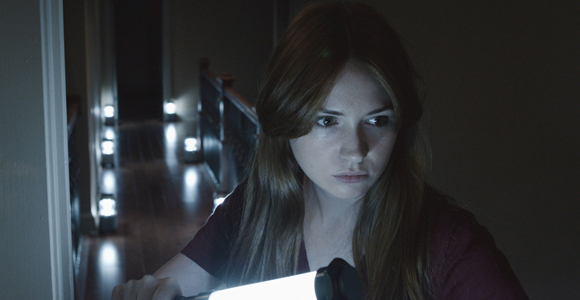 We’re very excited for Karen Gillan’s post-Doctor Who career path so far. She’s got the seriously scary-looking horror film Oculus coming out April 11, not to mention a role in Marvel’s Guardians of the Galaxy, and a pilot for ABC. The actress recently took some time out of her busy schedule to do a Reddit “Ask Me Anything.” Here are some of our favorite questions and answers.

Question: Hey Karen, what’s your favorite part of Scotland? Of the World?

Question: Can you tell us one secret about Matt [Smith]?

Answer: Matt eats a whole packet of chocolate biscuits a night with tea.

Question: In Oculus you have a nearly 13-minute monologue, how hard was it to shoot that scene considering you had to do it with an American accent?

Answer: It was the hardest thing I ever had to learn. It took me 2 months. If you think of the memory like a muscle, I pulled it.

Question: If you could be any alien from the Doctor Who series, which would you be?

Answer: I would be a silurian.

That does not surprise me.

Question: What is the best dinosaur?

Answer: Pterodactyl. They get to fly and be a dinosaur.

Question: Pterodactyls are a pterosaur, not a dinosaur.

Question: I loved watching Doctor Who and seeing what color your nails were going to be each episode. Are they real and do you paint them yourself??

Answer: They are real, and I painted them myself every day to save time for the make-up artist.

What a nice lady.

Answer: Playstation all the way.

Question: If you could play any historical character, who would it be and why?

Question: In a lot of films and TV actors take little items of memorabilia to remember their time on the show. Did you take something, and if so, what was it?

Answer: I took the binoculars from the Tardis.

Someone call the police!! Now here’s the big one…

Question: If you were ever at a comicon (not as a guest but as a attendant) what series would you be “nerding out” the most over?

Answer: If the X-Files were at comicon now, I would freak out. Gillian Anderson is the greatest redhead there ever was. I want to believe.

But we’ll leave you with this one…

Question: Would you rather fight a horse sized duck? Or 100 duck sized horses?