K-Pop Fans Have Been Vanquishing Racist Hashtags and Police Apps

You love to see it 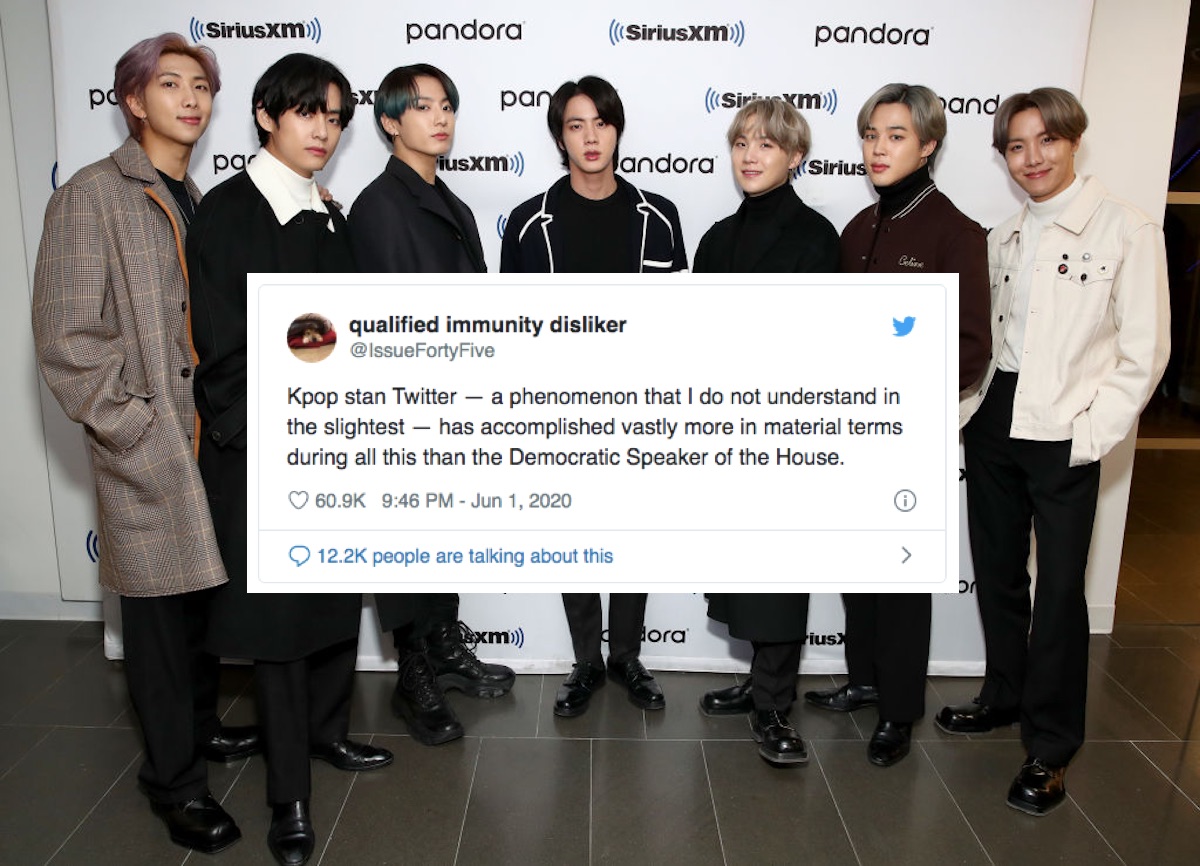 K-pop has become a global phenomenon, and fans of the Korean supergroups and artists are known for their ardent devotion. That dedication has lately been used as a force of chaotic good, as veritable armies out of fandom flood racist hashtags with images of their favorites, and dismantle police snitching apps with a tide of fancams. Who had “K-pop fans go to war online in service of Black Lives Matter” on their 2020 bingo card?

The K-pop-fueled anti-racist activism went viral after the Dallas Police Department directed people to their “iWatch” snitch app, saying that was the place where residents could anonymously upload video of “illegal activity.” K-pop fans had an idea, and boy, did they ever dance away with it.

guys download the app and fucking FLOOD that shit with fancams make it SO HARD for them to find anything besides our faves dancing https://t.co/zqjVHLWnZG

After this call to fancam arms and others like it exploded in popularity, K-pop fans succeeded in bringing down the police app.

LMFAO THE KPOP GIRLS TOOK DOWN THE IWATCH DALLAS POLICE APP WITH THEIR FANCAMS pic.twitter.com/U9qLFbJKl5

Twitter has delighted in supporting this unexpected turn of events.

Kpop stan Twitter — a phenomenon that I do not understand in the slightest — has accomplished vastly more in material terms during all this than the Democratic Speaker of the House.

2020. haven’t been out in 82 days. i hear sirens and helicopters all day. tony hawk and kpop fans are the only people i can trust.

K-pop fans, buoyed by their success, weren’t about to stop there. Today they have successfully bombarded hashtags like #whiteoutwednesday, #whitelivesmatter, and #bluelivesmatter, cynical attempts by racists and trolls (the two are not mutually exclusive) to mirror popular hashtags related to Black Lives Matter. In place of “white lives matter” posts, we encounter dancing and singing Korean superstars. You love to see it, folks.

To everyone confused: this tag was filled with white supremecist posts and anti-BLM. The K-pop community then came in to flood the feed with K-pop vids to drown them out and essentially become a joke. Thank you #WhiteLivesMatters pic.twitter.com/FfR0UJWf0u

The entire #WhiteLivesMatter just got hijacked by K-POP fans…

And since K-pop fans are a worldwide force, their action isn’t limited to Americans or American-based hashtags.

I was really scared to open the #WhiteLivesMatter hashtag which is now trending in Russia, but then I finally did and Russian k-pop community indeed rules and already wrecked the entire shit. DEATH TO NAZIS pic.twitter.com/X5oMkTF8QQ

Flooding hashtags with content isn’t a new tactic to shift its focus, but in the past, this has generally been a troll endeavor organized by the likes of 4chan. When I worked in social media pre-2016, there were regular “raids” wherein trolls would attack tags like #lgbtq, #socialjustice, and popular fandom tags with disgusting image content like gore, animal abuse, sexual assault, and horror. These “raids” were intended to shock and traumatize people for “lulz.”

K-pop fans have turned this concept on its head, using perfectly innocent content that they have in abundance—videos, gifs, images, and memes about their favorite K-pop idols—to disrupt negative tags in service of anti-racism.

I stan all the k-pop stans, thank you for your service. #WhiteLivesMatter pic.twitter.com/yU2EV3jmof

White supremacists watching the #whitelivesmatter and #whiteoutwednesday hashtags being taken over by Kpop stans pic.twitter.com/oFEvpgoV1S

Watching fans band together in a unique form of activism that only makes sense in the dystopian hellscape of 2020 has been a joy. More efforts from fandom like this.

#WhitelivesMatter
me to all the k-pop stans out there taking care of this hashtag pic.twitter.com/0dJEOyDzyQ