Remember when Jason Kessler tried to host a presser following the deadly white supremacist rally? Protesters shut him down. pic.twitter.com/ZrOvLHIrcQ

In creating Twitter, Jack Dorsey gave a comfortable home to hate speech and rampant bigotry, something that he’s been forced to address a number of times, though his occasional acknowledgements are nowhere near proportionate to the level of harassment present. He reached out to Leslie Jones after racist users drove her from the site, also banning Milo Yiannopoulos, who led the attacks. Just last month, after facing backlash for temporarily banning Rose McGowan in the midst of her breaking accusations against Harvey Weinstein, Dorsey announced the company’s plans to “counteract” the silencing of voices on Twitter.

Apparently, the extent of their plan to make sure voices are heard is to double users’ character limit and bestow verification checkmarks on known white supremacists.

Looks like I FINALLY got verified by Twitter. I must be the only working class white advocate with that distinction. pic.twitter.com/IMXqtmhgvn

Jason Kessler, as you can see from his now-verified account bio there, is a contributor to a number of far-right-wing sites, including the Daily Caller, Tucker Carlson’s conspiracy-theory-ridden garbage heap. He also organized the “Unite the Right” rally in Charlottesville, which saw–among other violent attacks–the murder of protestor Heather Heyer. Following her death, this was Kessler’s response: 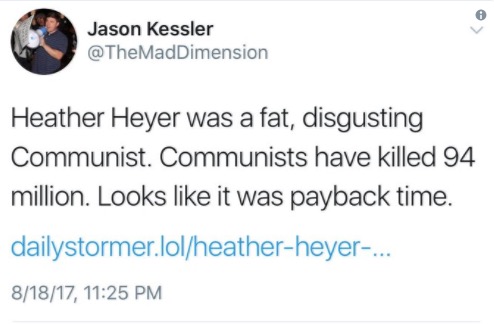 (He denied sending the tweet, saying his account was hacked, then took that back and blamed Ambien.)

And now this man has been deemed “verified” by Twitter. The company is adamant that verification does not equal endorsement, but in their own words, the check mark is designed to verify the authenticity of “an account of public interest.” They consider verification for users who work in “key interest areas,” like, I suppose, Naziism.

When applying for verification, Twitter asks users to explain why they deserve that blue check. “If the account represents a person, we want to understand their impact in their field. If it represents a corporation or company, let us know their mission.”

What do you think Kessler could have written there that was seen as worth verifying? Sure, the check mark may not be a direct endorsement of ideals, but Kessler had to describe some sort of mission or impact on his field that made Twitter say “You know what? Yeah! That guy has a voice worth amplifying.” Because verification is amplification. Blue-checked tweets show up first in searches and reply threads, and they also tend to have better luck with getting Twitter to take their claims of harassment and abuse seriously.

Also, no matter how hard Twitter protests, verification carries the appearance of “official” status and importance. Their solution? As of this morning, they’ve “paused all general verifications.” So Kessler can be verified, but no one else, at least not for a while. Like, until everyone hopefully forgets about all this.

Verification was meant to authenticate identity & voice but it is interpreted as an endorsement or an indicator of importance. We recognize that we have created this confusion and need to resolve it. We have paused all general verifications while we work and will report back soon

How is Kessler using his newly verified statues? What contributions is he making to this twitter.com community? In the day after receiving his verification, he called Rose McGowan a “thot” who has to be “held accountable” for seeking attention, claimed Virginia voted Democrat because, due to immigration, “large swathes of the state have no recognizable Americans; look like a third world bazaar,” and, oh yeah, this bullshit:

This is yet another reminder that when Twitter says they’re going to work on making sure our voices are heard and that abuse won’t be tolerated, they have absolutely no idea how to do those things.

How do you verify Jason Kessler, thus giving him a place of distinction, and, at the same time, tell people of color that they are safe on Twitter? How @jack and @TwitterSupport?

Hope you realize there's no such thing as being neutral when it comes to Nazis. Verifying Jason Kessler is a political act — and one that puts you on the wrong side of history. https://t.co/VlvDaMwQO3

To take a more aggressive stance in our rules…