I’m sorry to disappoint you, but when I said “real dinosaurs” I meant “animatronic dinosaurs,” but “real” fits into a headline much better.

In an interview with Empire, director Colin Trevorrow has admitted that Jurassic World has been crafted with sequels in mind, saying “We wanted to create something that would be a little bit less arbitrary and episodic, and something that could potentially arc into a series that would feel like a complete story.”

It’s not surprising that Universal would seek to play the sequel game with JW, but it’s still a little unusual for a Jurassic Park movie, purely because of how much Hollywood has changed in the twenty-odd years since the first film was released. Trevorrow also confirmed that JW would be making use of animatronic dinosaurs, a relief for many fans who still appreciate how seamlessly CGI and physical effects were blended in the original, and talked about the themes of the film.

When at its best, the Jurassic Park series has always been about questioning humankind’s (particularly the corporate system’s) ability to control biological nature, and our own basic human nature as well. Let’s not forget that while Hammond’s idea was risky in the first place, it was the greed and self-entitlement of Dennis Nedry that most directly endangered human lives. Trevorrow paints a picture of a film that’s less about control and more about co-existence.

It’s about alpha dominance and the fact that humans have been the alpha species for a very long time. And so now we’ve brought back another that happened to be the alpha species during its time, and we have to co-exist, so what is that relationship?

To conclude, Entertainment Weekly has received three set photos from the production of Jurassic World, including the one at the top of this post, and this image of star Bryce Dallas Howard. 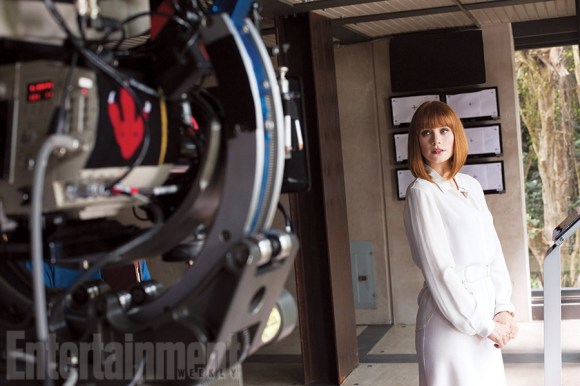 She is pictured with what appears to be some sort of machine emblazoned with a dinosaur footprint. Or I can’t recognize a fancy movie camera when I see one. That’s entirely possible!

(via /Film and Entertainment Weekly.)