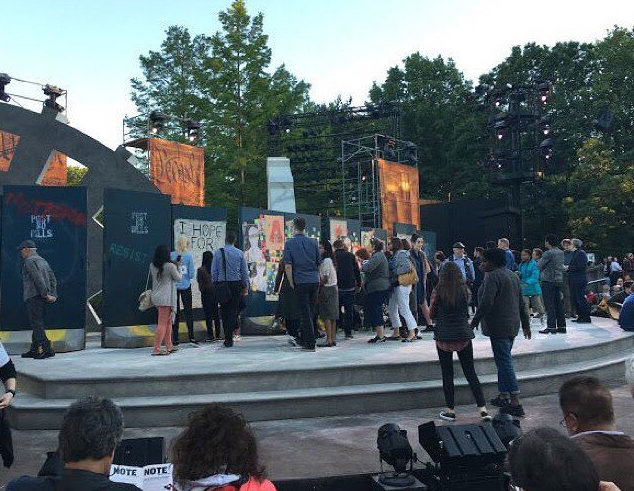 I keep wanting to be done writing about the outrage over the Public Theater’s Free Shakespeare in the Park production of Julius Caesar, in which Caesar is depicted as a Trump-like figure. The idea that anyone can think Caesar carries a pro-assassination message is ludicrous. Those hypocritically ignoring the multiple high profile Obama-themed productions no one protested are infuriating. And then there are those making distressing connections between this play and the horrific shooting at a GOP baseball practice. I’d like to just be able to ignore all of it, but then these conservative protestors take their already misplaced outrage and hurl it further into the void, and I find myself being dragged back in.

Over the weekend, performances of the show were interrupted by conservatives rushing the stage. A few audience members have shared descriptions of the interruptions, and the jarring, surreal experience of seeing actual protestors who, either deliberately or coincidentally, were dressed in the same all-black outfit as the show’s characters protesting Caesar. After their removal, actual police officers patrolled the theater while characters dressed as police patrolled the stage’s tumultuous Rome.

Protestors at Saturday’s performance (including mildly notorious Trump supporter and conspiracy theorist Jack Posobiec) as well as Sunday’s took to yelling “Goebbels would be proud,” referencing Hitler’s Minister of Propaganda.

If you’ve never seen a Free Shakespeare production in Central Park, it’s worth noting that they most likely had to wait in line for hours to get tickets.

Obviously, people are allowed to have whatever opinions they want of this play. (Although even Fox News hosts are starting to condemn the way in which this opposition is being demonstrated.) But it sure would be nice if those opinions were informed by anything based in the actual reality of the show. Vox has a great take on everything the right could have grabbed ahold of if they wanted their criticisms to have validity: That Caesar (and therefore Trump) is a figure beloved by the people, that the play “warns about the futility of violence against him,” and that in doing so, the play can even be read as projecting “Trump-supporting ideas.”

The only idea not put forth in Julius Caesar is that killing Caesar was a great decision, celebrated by all, and successful in solving all of Rome’s problems. As the Public’s artistic director himself said of the play, “Julius Caesar can be read as a warning parable to those who try to fight for democracy by undemocratic means. To fight the tyrant does not mean imitating him.” Yet that’s what these protestors seem to think the message is.

If we thought this outrage couldn’t get any further misplaced, more and more people are emailing and tweeting their disapproval at the production of the Shakespeare play. In the rush to avoid actual facts, the Public isn’t the only company receiving that hate. Shakespeare companies all over the country, from Oregon to Texas to Massachusetts, are being told they should “burn in hell” and “get sick and die.” Again, these are companies with no ties to this production. Either people just really hate the works of William Shakespeare all of a sudden, or these people are just Googling “Shakespeare” or “Shakespeare in the Park” and sending hate mail and mean tweets to the first company that comes up, not realizing those search results are filtered by location.

As ridiculous and frustrating as the hypocrisy and obstinance seen in the opposition to this play is, it’s disheartening to see so much hate being thrown around so freely, with such a willful refusal to engage thoughtfully or even acknowledge the reality of the situation these people are opposing. If these protestors don’t want to think about the actual message of the play they’re criticizing, is it really too much to ask that they at least know what theater they’re sending death wishes to?