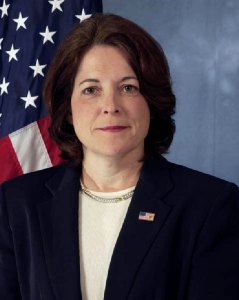 In something of breaking news this afternoon, the White House has announced that they will be announcing (I guess this only a little bit like putting out a trailer for your trailer) a new director of the Secret Service, to replace director Mark Sullivan, who announced his resignation last month. That new director will be Julia Pierson, currently the Secret Service’s chief of staff, and the promotion will make her the first woman in history to hold that position.

I have known and worked with Julie for close to thirty years. She was an excellent Assistant Director and Chief of Staff, demonstrating sound judgment, leadership, character, and commitment to our Country, the men and women of the U.S. Secret Service and those we serve and protect. This is a historic and exciting time for the Secret Service and I know Julie will do an outstanding job.

The image of the Secret Service, who are tasked with investigating counterfeiting and fraud in addition to safeguarding the president and other current, former, and potential national leaders of the executive branch, has been darkened by scandal in the past year, after eleven agents were implicated in a successful effort to engage the services of several prostitutes in their hotel while on a Presidential trip to the Summit of the Americas in Cartagena, Columbia. Before the end of April, nine Secret Service employees had resigned or retired, and some were reportedly being investigated for possible drug use while in the country, somewhat ironic given that one of the more contentious issues that the Summit covered was the feasibility of legalizing drugs currently targeted by the U.S. War on Drugs.

In reaction to the exposure of a harmful culture of “macho behavior,” change within the Service was called for, and rules were instated that regulate who can enter a Secret Service hotel room, as well as those that prohibit agents and personel from visiting “non-reputable establishments” and drinking alcohol less than ten hours before starting work. Whether or not Pierson has been tapped for promotion because her gender will be perceived as being at odds with a “macho” culture or not, it’s still a part of the Secret Service’s recent history that will be impossible for her to avoid. We wish her luck, and hope that her nomination does mean good and needed change for the Service.