Joyce Carol Oates is one of the most brilliant living writers of our time. She’s also a white woman and therefore prone to say some really problematic things when it comes to race. Not with malice mind you, but just a general lack of understanding.

“Othello” is a great enough work of dramatic art that, if the racial element were entirely removed, the play would still be a profound accomplishment. That Othello is a “Moor” could be made–almost–irrelevant. (Disagree?)

Othello’s blackness, or more so his otherness, is key to the play and the drama that surrounds his character and people’s reactions to him. Especially that of Iago.

There is no consensus that Othello is “black” because the concept of a Moor in the time Shakespeare wrote it could also mean someone who is Arab, but regardless Othello is a non-white, most likely black or brown man. Especially since so many lines make reference to Othello’s blackness in contrast with the whiteness of Desdemona or other white women. It has just been taken to mean that he is a black person.

Throughout the play insults flung at Othello include: “Barbary horse” (1.1.113), a “lascivious Moor” (1.1.127), and “the devil” (1.1.91). Roderigo calls Othello “the thicklips” and Iago tells Brabantio (Desdemona) that “an old black ram / is tupping your white ewe” (1.1.88). His blackness is on the tip of everyone’s tongue when it comes to dismissing and dehumanizing him. Shakespeare places all the of the time stereotypical ideas of dark skin=badness and white skin=goodness into the mouths of characters like Iago.

Iago’s motivation for wanting to destroy Othello is based on jealousy for being overlooked in a promotion and a fear that Othello has slept with his wife (you know those black men can’t keep their hands off white women). The “black ram/white ewe” line to Brabantio is steeped in the fear that has lasted for centuries (and one of the myths of the KKK) that black men are crazed, ravenous creatures who want nothing more than to grab the nearest white woman and run away with them.

Brabantio at first believes that Othello has used magic to bewitch his daughter. While Brabantio does eventually respect that Desdemona has made this marriage to Othello out of her own volition, he still disowns her. One interesting thing to note is that in the 1922 silent film version of Othello the character is made to be the son of an Egyptian prince and a Spanish princess in order to make the union “okay” because in the 30s interracial marriages were illegal. 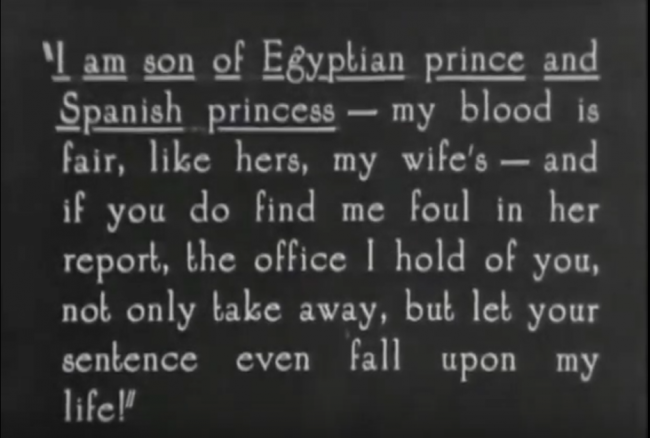 Race is interwoven into Othello’s sense of identity and removing that would make the character utterly dull, because let’s be real the reason we remember Othello isn’t because of the main character, it is because of Iago. Iago is the character everyone wants to really play. He has all the best lines and he is the most well-defined. Othello is still a great character because of his nobility, but it is nobility in the face of discrimination. If it was not for his race and the insight the play gives into the thoughts around non-white people at the time, the character of Othello would be very uninteresting.

Which isn’t to say that Othello is excellent representation either. He is physically violent towards Desdemona when he becomes convinced of her unfaithfulness to the point where he starts hitting her publically and it escalates to him murdering her in the end. Also, his fatal flaw is his temper. Meanwhile, Desdemona is this beacon of white feminity and doesn’t even really fight back as Othello murders her. She is just a victim throughout the story being cursed or scorned or manipulated by the people around her.  If you don’t think that scene from Get Out with Chris chocking Rose is a reference to Othello then you need to look closer.

If you took race out of Othello, it would just be like a non-supernatural Macbeth or Hamlet or Julius Ceaser. Would it still be a competent play? Yes, because Shakespeare’s tragedies are really good, but it would not stand out as much beyond Iago and the cruel death of Desdemona. Let’s not forget we there are plenty of excellent dramatic works by Shakespeare that have not stood the test of time. You try to find a good copy of Timon of Athens or get a class that covers Troilus and Cressida well.

Why would you want to take it out in the first place? Even modern-non-blackface adaptations of Othello starring white actors in the lead role switch it so that white Othello is the only white person and the rest of the cast is black. (Thanks, Patrick Stewart!) This is because a sense of otherness is key to Othello—always.

Not to mention it is great to drop the fact that even Shakespeare in the 1600s was able to write a story about a flawed, but tragic black protagonist, when writers today struggle about how to make modern-day New York City properly diverse.