Meanwhile, men accused of sexual misconduct continue to be employed. 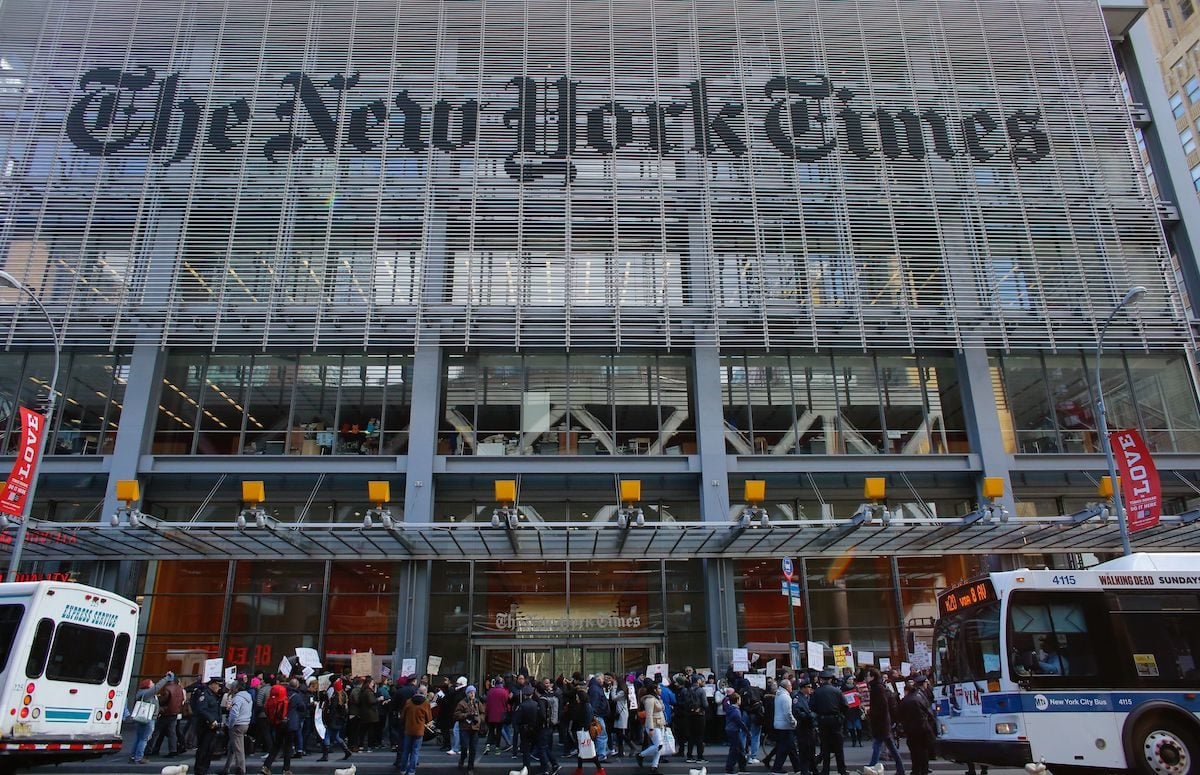 The New York Times is facing public outcry after firing editor Lauren Wolfe for tweeting that seeing Joe Biden’s plane arriving in Washington, D.C., before his inauguration “gave her chills.” As you can see below, it’s a fairly innocuous sentiment shared by countless citizens across the country, and hardly grounds for firing. But thanks to the relentless efforts of bad faith actors, conservative mouthpieces, and Trump supporters, Wolfe has lost her job. 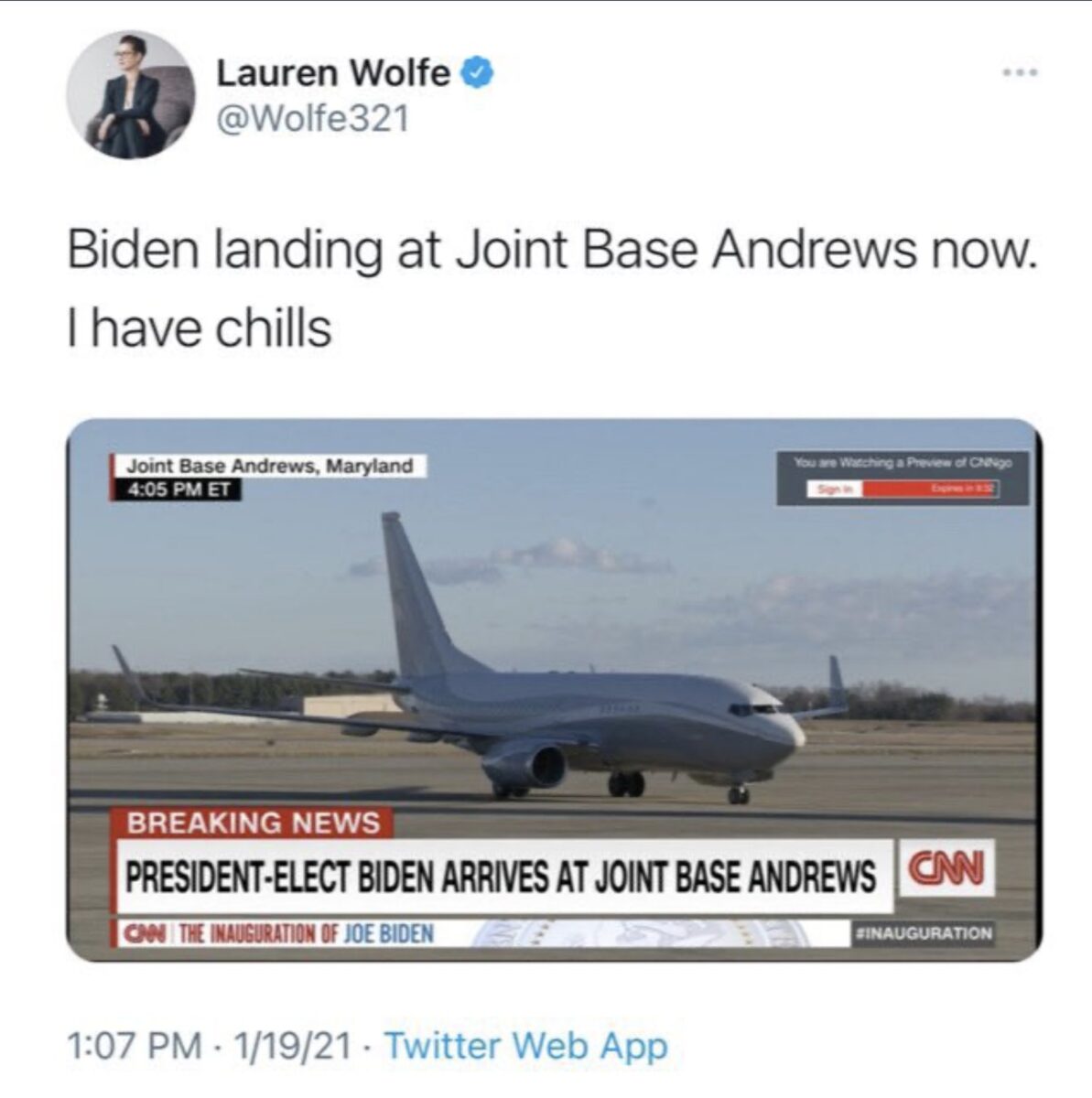 Wolfe, an award-winning journalist who has reported extensively on rape and sexual assault in war zones, was quickly defended by her fellow journalists, including Josh Shahryar, who tweeted a lengthy thread on their friend and colleague. Shahryar pointed out how Wolfe’s tweet set off a firestorm of bad faith journalism that led to targeted harassment, stalking, and death threats simply for expressing relief at Biden’s plane landing.

Let me tell you who Lauren is.

How this has impacted her personally.

And finally, how this is impacting her and her doggo right now.

If you’re “ANGRY” that someone had chills because fascism lost in this country, then you’re most likely a fascist.

And they went after Lauren with a vengeance. And I mean vengeance. You can search for @wolfe321 on Twitter and see.

On the side of the street. Huddled with her doggo. Her lip is red because she had just been to the hospital to get stitches after an accident. They followed her with cameras. They cornered her and took pictures of her. For expressing relief. pic.twitter.com/DKIoVHhYJP

Shahryar’s impassioned thread was followed by several fellow journalists who called out the Times for firing Wolfe. It’s especially egregious in light of the men who remain employed by the Times, like Glenn Thrush who was suspended but not fired after multiple allegations of sexual misconduct. Or Andy Mills, whose “Caliphate” podcast series was debunked and retracted, forcing the Times to return a Peabody award. Those men still have their jobs at the New York Times.

And that doesn’t include countless bad faith and biased articles that the Times has championed. I mean, only last week the newspaper had articles criticizing Biden’s Peloton and Rolex watch, because those are newsworthy apparently.

According to tweets from many credible journalists, (including a thread by @JShahryar) Lauren Wolfe was fired from the @nytimes for posting the tweet below.

If this was the extent of the infraction, firing her is unacceptable especially when NYT supports Stephenson and Haberman. pic.twitter.com/n4WMuH2qYJ

I just canceled my @nytimes account for this. A paper that would fire Lauren Wolfe but keep serial harasser Glenn Thrush isn’t getting a dime of my money. https://t.co/MttzXuwD3V

I honestly think if Lauren Wolfe had written, “I love Joe Biden, he’s the bestest president ever!” it STILL wouldn’t have been a fireable offense. But “I have chills”? That could be construed as being awestruck by the sight of Democracy in action.

The “chills” firing after Maggie Haberman sucked up to and normalized Trump for access for 4 years, is even for the Times, a new low. https://t.co/E7UGOLPFdL

Many are also pointing to journalist and pundit Glenn Greenwald, for tweeting that Wolfe’s comments were “a matter of personal dignity.”

If you’re in the national press and will be on TV at any point today and being to feel the need to weep joyously, just hold it in until you find a private place. Nobody is expecting any adversarial coverage over the next 4 years, but it’s just a matter of personal dignity. pic.twitter.com/FNKcFRPF56

If I had the power to cause the NYT to fire their journalists and editors simply by criticizing them, the Paper of Record would look much different than it does.

The suggestion that NYT editors fire people whom I criticize is lunacy. https://t.co/KXpxPbk2b3

A New York Times spokesperson disputed the firing claim, saying “For privacy reasons we don’t get into the details of personnel matters but can say that we didn’t end someone’s employment over a single tweet.”

In the meantime, friends of Wolfe are urging readers to call the New York Times and encouraging donations to Wolfe’s Venmo. And after four years of simpering and sycophantic coverage of Donald Trump, many are ready to cancel their subscriptions altogether. Unless the Times can adequately explain their sexist double standard that led to Wolfe’s firing, they will retain their reputation as a biased, sexist hive of bad faith journalism.

(via The Wrap, featured image: JOHANNES EISELE/AFP via Getty Images)

Correction: The original version of this story used the wrong pronoun for Josh Shahryar.