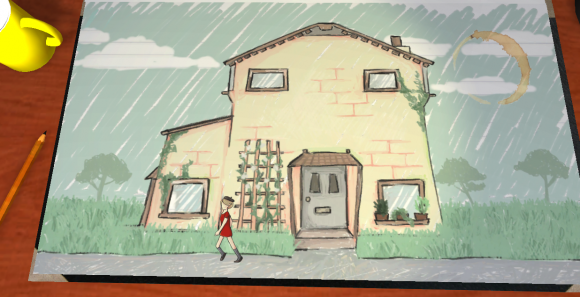 Journal is a game with problems. I was on board with so many things about it — wandering through the pages in a notebook, the shadow puppet interludes, the mystery of a young girl whose beloved diary has gone blank. It’s a simple game, one that revolves around talking to other characters and piecing the story together. I’m normally all for adventure games of this sort, but I had trouble getting into this one. The wandering was too open-ended, leaving me sometimes at a loss for what I should do next. There were incongruous moments where a character would reference a past event, and my character had full knowledge of what they were talking about. Weren’t we supposed to be filling in the blanks together? Apparently not. The effect left me feeling distanced from the story.

It wasn’t until the day after, when I started reflecting on the game, that it started to bother me. Really bother me. The more I thought about it, the more I didn’t want to write about it. I wanted to let this one lie. The nameless protagonist of Journal is a young girl, who I placed somewhere between eleven and fourteen. That’s an age range I do not like thinking about. And even though Journal’s girl was wrestling with things that I largely did not, the way she reacted to them left me feeling bruised.

Early adolescence was not an easy time for me (is it for anyone?). I was the weird kid, the nerdy kid, the kid with glasses and braces and acne. My clothes weren’t right. My hair wasn’t right. The fact that I usually got top scores on tests and projects did not do me any favors. The other kids reminded me of this on a daily basis, during the long walk between classrooms. There was a stretch in the seventh grade where I would eat my lunch as fast as humanly possible, then spend the remainder of recess acting as if I was on my way to do things. I would visit the bathroom several times, even though I didn’t have to use it. I would go to the locker bay and pretend to be searching for something in my belongings. I walked purposefully, zig-zagging my way around campus, trying to give the impression that I had somewhere to be. If I stopped, if I chose to read a book or doodle instead, someone might notice that I was spending lunchtime alone. That was the kiss of death.

I stopped doing my homework. I stopped wearing my glasses, even though it meant that I couldn’t read the whiteboard. My grades, naturally, plummeted. My parents were frustrated and disappointed, as were my teachers. I sat through endless parent-teacher meetings where I’d just shrug and mumble when questioned. I never told any adults what was going on. I never told anyone that I was being bullied, that some kids had gotten into the habit of following me home, so they could continue yelling things at me from across the street. I never explained why my behavior was changing, because I didn’t understand it myself.

So when Journal’s protagonist gives her shy, awkward friend Elena a half-hearted apology for leaving her waiting alone on the playground for an hour, or when she ‘fesses up to playing a prank on nerdy know-it-all Anne, I got angry. I got angrier still as I was given dialogue options to lie to them about what I’d done. I knew that girl. The not-quite-popular kid who joins in on the bullying, not out of actual meanness, but out of desire for approval. The collaborator. I did not feel sorry for her.

But it was the little girl in me who was getting angry. Adult me was concerned. It was a similar feeling to one I’ve developed in recent years, as some of my friends have started having kids of their own. What had been going on with the kids who picked on me? What kinds of hurt had they been dealing with that made them want to hurt someone else? I have wondered this with particular regard toward the worst of my bullies, a spiteful boy who even the popular kids shied away from. What the hell had happened in that child’s life to make him lash out at everyone he met? Did he get help? Did he get better? (I went to high school with him as well. The prognosis was not good.)

As the game progressed, I found myself not only empathizing with the kids who had been mean to me, but recognizing myself as well. I did not have the same family issues that the girl in Journal did, but that didn’t matter. What I saw was a little girl in a lot of pain, doing stupid, unhelpful things in response to feelings she didn’t know how to process. That, I understood. I understood why she froze up when adults confronted her, their words streaming into gibberish. She was trying to disappear. She was trying to withdraw from the things she’d done wrong, because she didn’t know why she’d done them.

And I understood, too, why she was mean to people who had done nothing to deserve it. It is tempting to focus only on the people who’ve wronged you, to write yourself into a narrative where you have never ever done the same to someone else. But I did, just as the girl in Journal did. There are two girls from my childhood who I wish I could turn the clock back for. One from fourth grade, who I willingly and purposefully made cry, after realizing that she was even lower on the totem pole than I was. I felt ugly after the fact, and I knew what I’d done was wrong, but I never apologized. Like in Journal, it was easier to hide from my guilt than admit that I’d done something bad. The other girl was from middle school, that same time when I was feigning busyness in the locker bay. She was nice to me. She reached out. I brushed her off. Why? Why would I ignore someone nice, when I was so lonely? Was I protecting myself? Was I holding out for approval from someone cool? Was I afraid of aligning myself with another misfit? Was I trying to tap into that power of rejection that my bullies wielded?

As Journal suggests, probably all of the above. There is perhaps nothing more human than to react to pain by causing pain. That’s why we so admire those who respond to injustice with kindness and forgiveness, because the ability to do that freely is rare. Acting with anger is so much easier. My own memories of that make me squirm. To those girls I mentioned above, I was the collaborator. Would it matter if I could find them today and tell them that I was sorry, that I didn’t mean it, that I was a dumb kid dealing with her own nonsense? They might appreciate the apology, but it wouldn’t erase the hurt I caused. You can tear out pages, but you can’t change the fact that they were written.

As I thought about the missteps I made, I found myself calling up a well-worn fantasy. Having mastered the art of time travel, I step confidently through a temporal portal into the locker bay of my old middle school. My younger self has watched a lot of Star Trek, so once she gets over the initial surprise, she is cool with this. She notices that my teeth are straight, my skin’s cleared up, and though I still don’t know what to do with my hair, I’ve settled into an accord with it. I look pretty good in glasses, too. I give my younger self a big hug, and tell her that her life is going to be awesome one day. I tell her that her parents love her very much, and that even though it’s hard to talk about what the other kids say to her, the things they say aren’t true, and telling someone will help. I point toward that nice, quiet girl from social studies class. “She seems like she could be a good friend,” I say. “Don’t ignore her. She’s being genuine.” Then I march into the principal’s office with a printed list of names. All the kids who bullied me. One of them is underlined. “These kids are hurting,” I say. “You should find out whether everything’s okay at home.”

I realized, as I tried to wrap myself in that imaginary blanket, that urge — the urge to rewrite your own story — is Journal in a nutshell. The girl in that game couldn’t fix the things she’d done, even though she feigned ignorance, or placed the blame elsewhere. The more she tried to hide from the past, the more it came back to bite her. All she could do at the end was learn to recognize which things weren’t her fault and which things were — and then learn to accept them all.

Despite my issues with the gameplay, I admire Journal for driving that message home.

Journal is available for Windows and Mac. It can be purchased on Steam or straight from the developer.