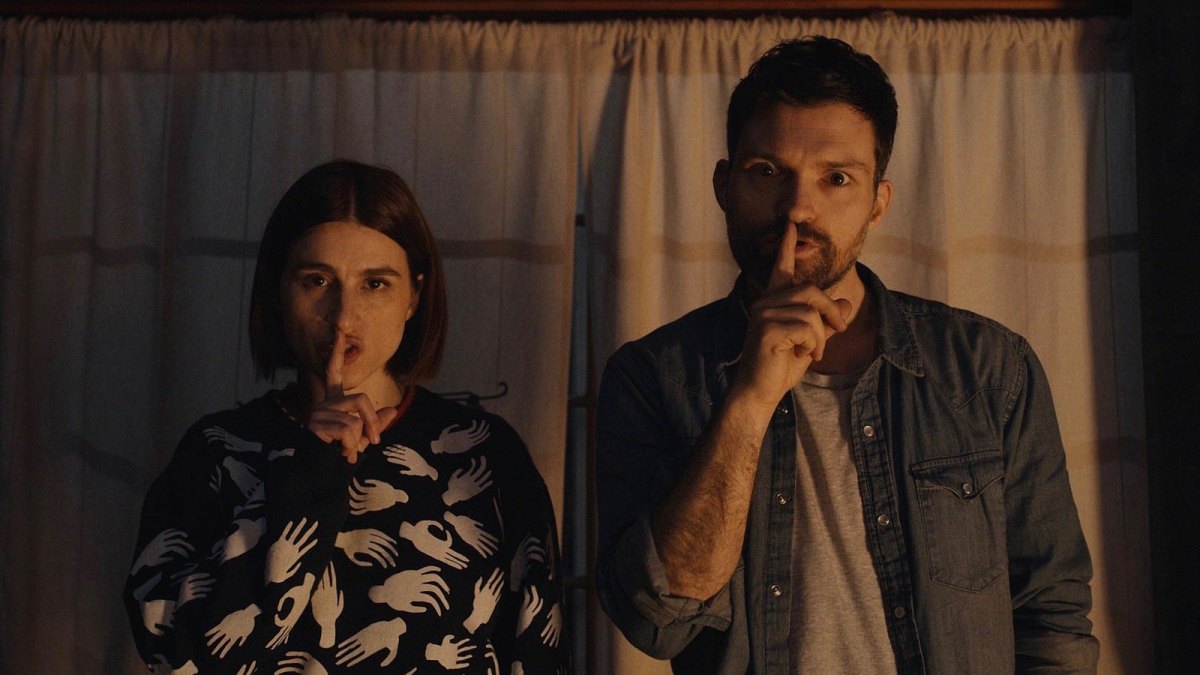 Scare Me is an interesting look at the writing process and the struggles that many writers face over and over again. Whether it’s in regards to how they interact with other writers or coming up with ideas on their own, these creators often struggle to bring their stories to life.

Talking with stars Aya Cash and Josh Ruben (the latter also wrote and directed the film), it’s clear that there is often a struggle for women to get their stories told, and even the “nice guys” of the world are not people who care more than they care about themselves.

Speaking with Aya Cash, I, at first, found her character Fanny’s actions at the end of the film to be a bit heartbreaking, mainly because I first thought that Fanny was taking someone else’s story—something she claimed throughout the film that men constantly did to her. But it is also a great look at how writers are observers, even to the point where the story you’re telling might be told by someone else. You have to just be the better storyteller.

I asked her what drew her to Fanny in the first place.

“I was drawn to Josh Ruben before I was drawn to the character actually. Because we are friends in real life and had worked together a little bit actually on You’re the Worst but had been friends for years. And I knew that he was brilliant and the world didn’t necessarily know yet so when he was like ‘Let’s go make a little movie in the woods,’ I was like ‘Absolutely'”

Cash went on to talk about Fanny as a character and how she is a writer in a typically male genre (the horror world) and how Fanny’s own ego bleeds into how she deals with Fred and his inability to tell a story, even though he came to a cabin in the woods to “write.”

“Being any kind of artist takes hubris and the ability to think that you might have something interesting to say and you can also, obviously, be very wrong about that but that’s a requirement for all artists. So I could totally connect to her sort of ‘this is what I think is important, this is how I see the world’ and then it was a really great way to deal with, at least in what Josh has talked about, in terms of misogyny in the genre but also just in the world. And having this character who won’t let him get away with anything and is very dismissive of his POV and kind of says to him ‘Why do you think you have anything to say?’ which is her own ego too.”

Then, when I got to speak with Josh Ruben on why he wanted to tell this story, it’s something that I think people should be talking about more:

“A lot of conversations I was having with women in my life, either fans of mine or friends, who were talking about their experience being sort of plowed over or talked over or taken advantage of by men. So I really was interested in exploring very specifically the gender dynamic of a fractored dude who can’t self-soothe in the face of a woman’s greatness and talent. So we’re making a movie about the creative process with a really fun punchy veneer and a nice rate of change. And a movie about the creative process and the rate of process and freedom of process and freedom to explore but at it’s core, toxic gender dynamic especially, you know, as far as fractured white dudes go and their inability to self-soothe in a woman’s greatness and the presence of a woman’s greatness and that was the heart of it.”

But one of the most important parts of our talk together was when Josh Ruben also recognized the privilege he got to have in talking about this movie he made and the brilliance of it in these times when talking about movies seems insignificant:

“You know, I’m speaking to you 24 hours and change after the verdict, or lack thereof, on Breonna Taylor’s behalf, and how little justice has been granted for the life of this woman and, you know, speaking to you from this privileged position of being able to do PR for my first film as a white male filmmaker and I feel that bit of guilt in having these kinds of conversations and talking about this process and everything else and, you know, that bittersweetness of getting your project out in the world when the world is kind of on fire. But I will say, I want people to watch this and have that same kind of escapist feeling that I did when I was a kid and would pop on kind of brighter horror films.”

Scare Me is available on Shudder on October 1st!