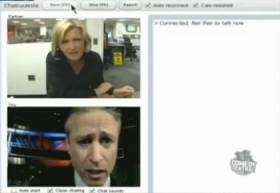 Major props to the anchors, who all turned in hilarious moments (and biggest props to Sawyer, who was the least hammy and the most out of her element, but still gamely participated) — but the best and funniest moment belonged to Olbermann, whose pseudo-Special Comment was perfectly timed, right up to “I think one of us is supposed to take our pants off now.” Well done, sir.