People aren't just upset because we liked the actress. 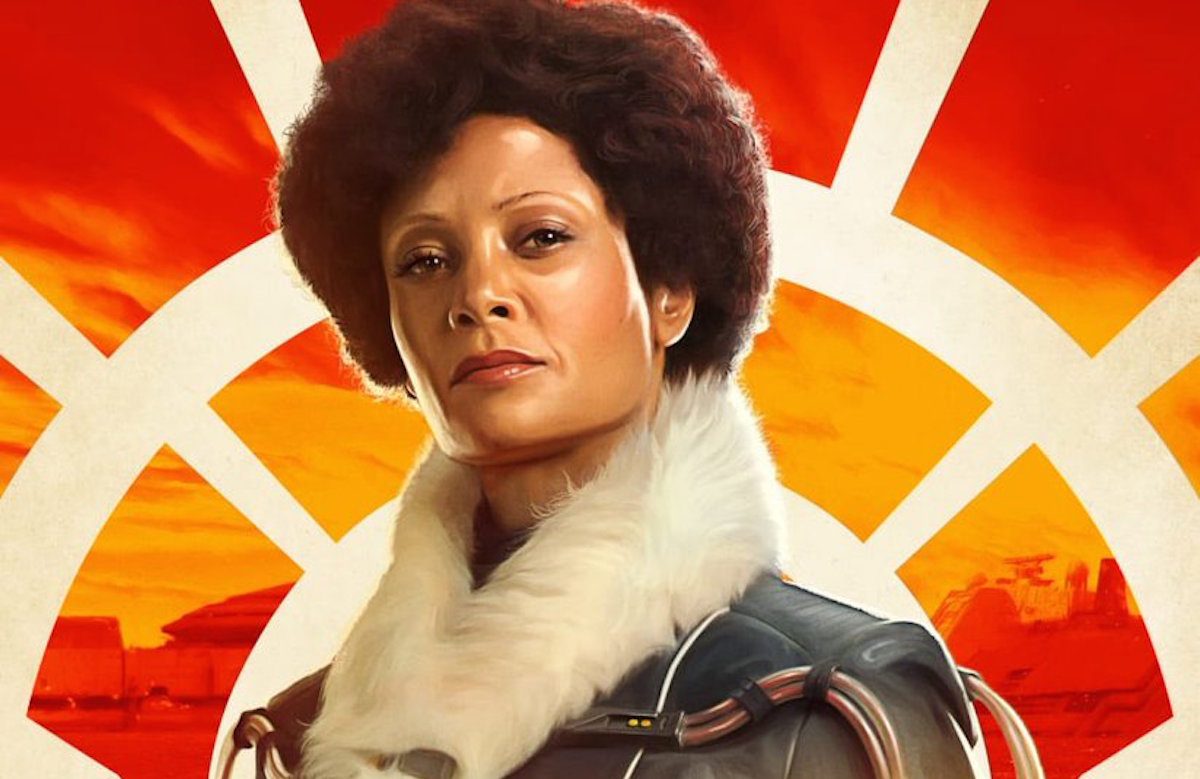 Today, I woke up to a curious thing. It seems as though Solo screenwriter Jon Kasdan had read, and in fact praised, my article on L3-37’s treatment in the Solo novelization as part of 52 facts about the film he released to celebrate Solo‘s digital release. While I appreciate Kasdan taking the time to read a piece that, quite frankly, is not the kindest towards his decisions, the information in his facts also struck a chord with me about another decision that I also found deeply troubling. Spoilers for Solo will follow.

When it came to characters in Solo, I was most excited for Lando, for L3-37, and for Val, played by Thandie Newton. Val was the first major female character played by a black actress in the franchise. She looked like a total badass in the trailers. I’d always admired the campaign #SWRepMatters, and it seemed as though, well, representation was going to matter.

I was especially excited for Val given the news about how Solo nearly cast Tessa Thompson in the role of Qi’ra before it ultimately went to Emilia Clarke. The casting of yet another white brunette, in a franchise that features women who all look related to one another, didn’t interest me as much as a talented actress breaking major ground in Star Wars.

But then, much to my dismay, Val died within the first twenty minutes of the movie, fridged to motivate a white male character. I was sitting behind a Val cosplayer when this happened; she visibly reacted with shock when the moment occurred. It would be a lie to say that it did not negatively impact my ability to enjoy the rest of the movie, and now, today, Kasdan has finally responded to critics of Val’s demise, saying,

“In retrospect, Thandie Newton may actually have been too good and too interesting as Val. It was always in the design of the story that Beckett would lose his trusted crew members during the Conveyex Job-gone-wrong and be forced to rely on newbies, Han and Chewie, and this would also open the door for Lando, Qi’ra, and L3 to join the crew, but Thandie is so compelling to watch that the death of her character feels a little like a cheat. It’s an odd and unexpected problem that comes with working with such amazing, compelling actors in the Star Wars universe. You just want more of them.”

The problem isn’t that Newton is a talented actress who we want to see more of, though she definitely is. I found the cast of Rogue One to be played by talented actors who I wanted to see more of, but they weren’t fridged off to motivate a bland character who then got to be rather dull for the rest of the movie.

No offense to Woody Harrelson, who is a great actor; Beckett is just not an interesting role.

So, I didn’t find myself as full of rage when they were offed as I did when Val died. The problem isn’t with fans who wanted to see more of her, either, because I’ve been on Twitter long enough to know there were plenty of fans who were excited to see a black actress in a major role in Star Wars, who weren’t just upset as fans of Newton herself.

The problem was that Val was an interesting character, a badass played by a talented actress who was breaking new ground in Star Wars, and she got fridged. Kasdan could have chosen to save her, because honestly, it wouldn’t have changed much to have Val and Beckett switch places aside from making things more interesting. (Just make sure Han doesn’t shoot her at the end, and we’re good.) Fridging Val not only shows that women of color are disposable in the film, but that Val wasn’t worth a story of her own. It’s a dated trope that would be more at home in the seventies than in 2018.

If Kasdan felt that Newton was being wasted in the role, he could have simply altered the story. I’m thinking of ways in which Val’s continued survival would impact the story, and honestly, I’m having a hard time finding an outcome that’s negative. Instead, they all add a richness to the film.

In fact, let’s try this: Val survives. She goes along with the crew, and becomes close with L3 and Qi’Ra, which leads to a scene in which all three characters talk—and not about how Lando wants to sleep with L3. At the end of the film, with Beckett dead and Crimson Dawn on their tails, she opts to go with Enfys Nest, ultimately having had an arc about being a scoundrel with a heart of gold who finds herself drawn to a bigger cause (like Han in the original trilogy).

There. I solved the narrative problems and gave us more Val. And I’m just a lowly pop culture writer who has yet to be offered a Star Wars story. Kasdan is the son of Lawrence Kasdan, who famously gave us The Empire Strikes Back. The two even collaborated on Solo. If I can figure out an arc for Val, they could have done the same.

Solo needed more women behind the camera because the treatment of Qi’Ra, Val, and L3 does not belong in a film that’s hailed as part of a studio’s new and progressive lineup of films. Respectfully, Mr. Kasdan, thank you for taking the time to read my writing and listen to what I had to say about L3, but I have to disagree with you again on Val. I would humbly suggest that, next time, you have more women behind the camera who can point out the pitfalls in your story.