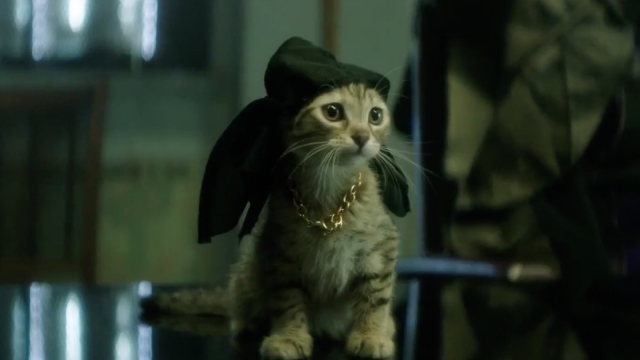 Listen, if you needed any more reason to go out and see Keegan-Michael Key and Jordan Peele’s Keanu, then here you go: Keanu Reeves will be voicing his namesake kitty for the film. Apparently, that wasn’t always going to be—it was only after Reeves was shown a trailer for the film that he thought he should check out what Key and Peele were doing. According to an interview with Keanu director Peter Atencio in the LA Times, Reeves’ representatives “politely declined” their initial offer to have him be involved with the film. “But then we got a call after the trailer came out,” explained Atencio. “Apparently, his sister showed him the trailer and said, ‘Hey, you gotta see this. You’re gonna love this!’ He flipped out and got in touch with us directly to say ‘If there’s anything I can do, let’s make this work.'”

After recording a few lines at a studio in Rome (where he’s filming John Wick 2), Reeves earned a credit in the film’s end credits, but sadly not in time for the version they screened at SXSW. Atencio also spoke a little bit more about the role Reeves plays (y’know, aside from being the cat), and how his voice cameo is worked into the fabric of the story. Spoiler if you’re trying to avoid finding things out about the movie, but apparently there’s a scene in which Peele’s character goes on a drug trip and needs a guide through his various hallucinations. Enter Keanu (the kitty) and Reeves (the voice). They never directly reference any of Reeves’ old work, which is neat, and Reeves’ voice becomes a great tongue-in-cheek (no pun intended) detail that earns a great payoff for fans who know what they’re looking for.

Check out Reeves’ turn as a kitty (which may or may not be better than Kevin Spacey’s turn as a kitty in Nine Lives) when Keanu hits theaters this Friday, April 29th. Important question: do you think Keanu (the man, not the cat) prepared for the role with acting tips from Nic Cage/Danny Pudi?