The Falcon and the Winter Soldier explores the failures of making a soldier a symbol. 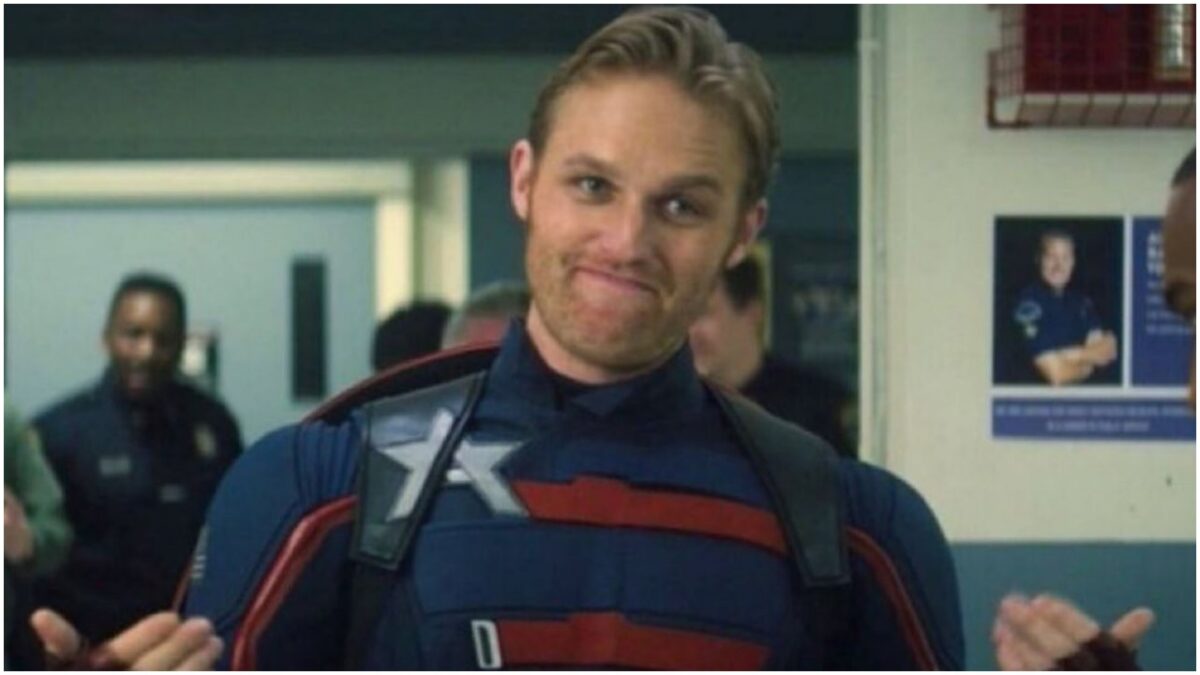 **Spoilers for the episode “The Whole World Is Watching” of The Falcon and the Winter Soldier.**

We knew that John Walker wasn’t fit to wield Cap’s shield, but wow, I did not expect to see him bludgeon someone to death in broad daylight. As the title of the episode suggests, thanks to smart phones and dozens of witnesses, Walker’s rage killing is only moments away from becoming worldwide news. But Walker snapping was telegraphed from the introduction of his character, both as a man way out of his depth and as a poster boy for white male fragility. He also symbolizes the vast overreach and corruption of the American military and the chaos wreaked by our country’s efforts to be the world’s police.

But there was truly no other end for John Walker, who was set up to fail by the very government that gave him the shield. In their desperation for someone to carry on Steve Rogers’ symbol, the government gave an ordinary soldier the shield, but no superpowers to back it up. How was Walker ever supposed to stand a chance against the other super soldiers as a mere mortal? He’s also denied any sort of back-up, save for his BFF Lemar as Battlestar. I mean, come on guys. Give the man a unit or some commandos or something.

Walker is a decorated soldier and a skilled fighter, and that identity is slowly broken down as he repeatedly gets his ass handed to him. After getting beaten up by the Dora Milaje, he sadly says to Lemar, “They weren’t even super soldiers.” Yes, he’s butthurt from losing to women, but he’s also lost the fantasy that the Captain America title offers. This gig was supposed to be a soul cleansing, a redemption of all the horrible things he did while serving in Afghanistan. It was supposed to wipe his slate clean, but all it’s done is reinforce the idea that there is no fixing what is broken.

The only way Walker would have worked as Captain America is as a poster boy. Had he been raising money for war bonds, doing USO tours, and functioning as a mascot (much like Steve did in Captain America: The First Avenger), then that would make some sort of sense. But throwing a man clearly suffering from PTSD in a high stress and unwinnable situation is just asking for radicalization.

What makes Steve Rogers the best candidate for the super soldier serum was his physical and health struggles. He knew the power of strength because he had none for so long. When Abraham Erskine explains why he chose Steve he says, “The serum amplifies everything that is inside, so good becomes great; bad becomes worse. This is why you were chosen. Because the strong man who has known power all his life, may lose respect for that power, but a weak man knows the value of strength, and knows… compassion.” He then asks Steve, “you must promise me one thing. That you will stay who you are, not a perfect soldier, but a good man.”

Steve had also previously proven his bravery and selflessness when he dove onto a grenade during a drill. Would John Walker have done the same thing? It’s wild to thing that the U.S. government would pick Walker for Cap duty, considering he must have gone through a barrage of psychological testing. I mean, Bucky’s getting government mandated therapy, shouldn’t Walker get some as well? And why is he all alone in terms of decision making and mission directives? He doesn’t have anyone doing recon or intelligence for him. How exactly was this all supposed to work?

Walker’s failures only serve to highlight just how apt Sam Wilson is for the role of Captain America. Sam has an emotional intelligence and innate understanding of people in a way that almost no one else in the MCU has. Thanks to his years not only as a soldier, but as a counselor to traumatized veterans, Sam Wilson wields communication and compassion as his chief weapons, not arrogance. At his core, he exemplifies everything that Captain America should be.

The Falcon and the Winter Soldier only has 2 episodes left, and will presumably end with Sam holding the shield, as Steve always intended. But does Sam even need the shield? His strength lies in his morality and character. He may not need the shield, but he sure as hell deserves it.