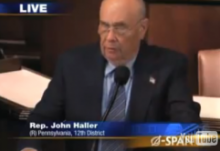 I’m not even going to bother with the label “this exists” because in a world where one frequently feels like the real news is straight out the The Onion it’s perhaps not all that surprising that an actual Onion story would be mistaken for the truth.

The video in question is of ‘Rep. John Haller of Pennsylvania’ reading out the “homeland terrorist preparedness bill” in which he keeps having to interrupt himself to say “classified.” A Google search quickly reveals that neither Haller nor the bill exist, though should you look closely at the video you will also see theOnion insignia on the lower right-hand corner, which probably should have tipped people off to begin with. Alas, this did not stop the video from making the rounds under the title “Martial Law Plans Revealed.”

>>>Check it out at Mediaite.