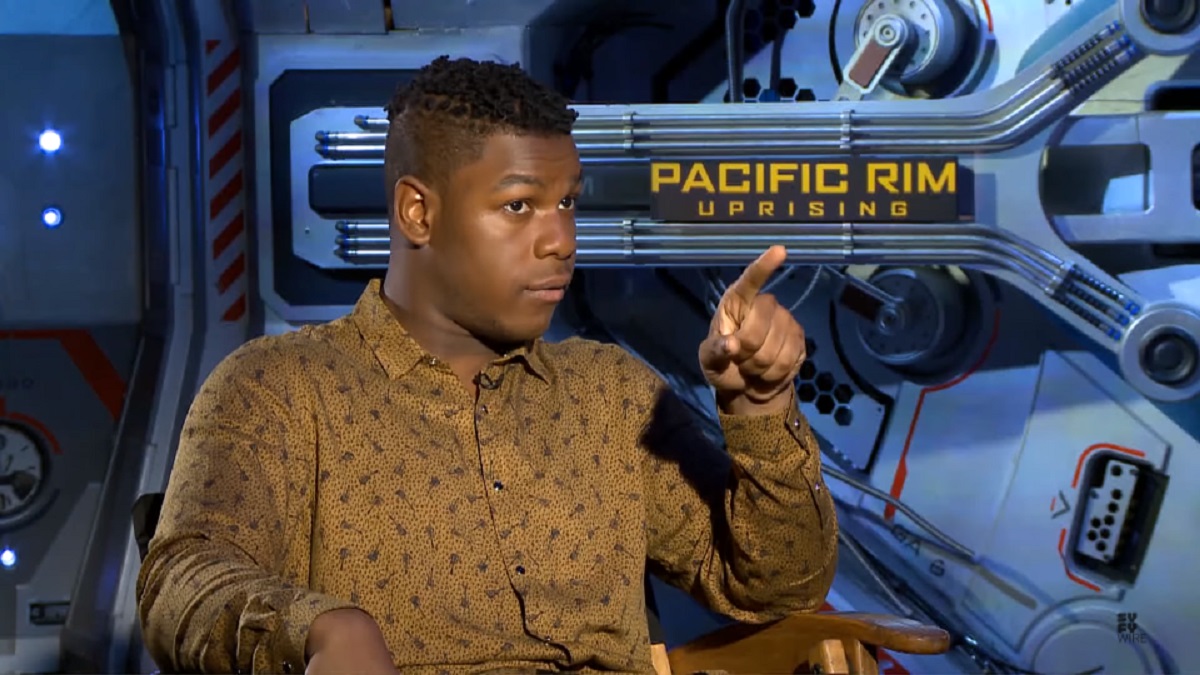 It’s only the second day of 2020 and already there have been two massive incidents of anti-blackness rearing its ugly head in media. The first two victims of this are Star Wars’ John Boyega and cultural icon Blue Ivy Carter, daughter of Beyoncé and Jay-Z.

Let’s start with the “lighter” of the two issues: John Boyega. So in a series of slightly shady tweets and statements being made by the Attack the Block star, one of the things Boyega said was, “It’s not about who she kisses but who eventually lays the pipe” in response to another comment by someone about how FinnRey might happen because Kylo/Ben is dead.

Alright, this joke can be seen as lewd at best, but it was taken as “John Boyega is making misogynistic and sexist comments that reduce Rey to someone who is just a sex object!” Replies online are using it as an excuse to unload all of their internalized anti-Blackness to defend a white woman from him. It’s gross.

People are saying that there are “rumors” that Daisy Ridley didn’t want to be around him because he was acting away towards her. Totally unverified comments that are just attempting to turn Boyega into a sexual predator for making a joke that is about two fictional characters, one of which he plays, and the other being someone he has been friends with for ages. Also, in context, this is just a shady comment about Reylo, not a sexual come on to Daisy Ridley.

It’s exhausting, because where has been this energy for John Boyega when he was facing actual vicious racism? Why was everyone so quick to “protect” Daisy Ridley and Kelly Marie Tran from John Boyega, but those same people were not trying to protect John Boyega from everyone else?

You in good faith think that his comment is messy? That’s one thing. Taking this moment and gleefully celebrating that so you can say: “I knew he was problematic and I hated him for some reason!” is not a valid reason for me to trust that you care about Daisy’s personhood. Not when you are defending her over … a ship. One of the people who started this whole thing was someone who “blackfishes” according to The Daily Dot.

Oh, and since it seems to be unclear what “laying the pipe” means, it means sex. Not rape, or something nonconsensual. It mays having really good sex with someone who is good at handling the “pipe,” much like a plumber.

But what happened with Boyega was just one part of the anti-Black 2020 BBQ. It also came with two people deciding to tear down a seven-year-old girl. Writers Violet Lucca and K. Austin Collins, who both work for major publications, made comments about Blue Ivy’s face and features. Collins said, “I have a feeling the Jay Z face genes are about to really hit Blue Ivy and I feel so sorry for her” and Lucca followed up by making a tweet that she would get surgery at 16, like Kyle Jenner, and then we would forget what she looked like. 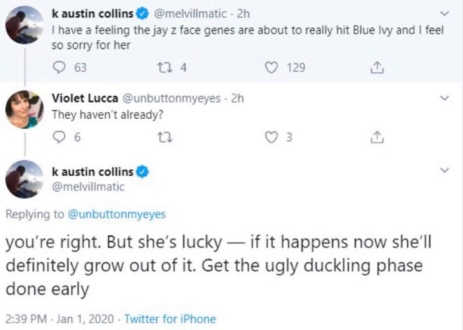 Both have them have since “apologized” but it doesn’t remove that a Black man started a conversation shaming a young African-American girl for having visibly Black features, and allowed a white woman to co-sign his comments. Because don’t let the Jay Z comment be taken as anything else but what it is: Jay has always gotten some level of shade about his looks because of his lips and nose. It is a form of anti-Blackness that many Black people, yours truly as well, have had to unlearn.

I can’t speak to Collins’ experience, but a man of his big age who has tweeted pro-Black should be more aware and careful bout that.

As for Lucca, they doubled down by having both a terrible apology and attempting to turn it into a class issue, rather than doing the very least to understand why people were upset.

“Sorry I was cleaning my apartment while this blew up, children of famous ought to be off limits, but time and again they haven’t been. So I said something petty and have been called ugly, old, and a racist.” She followed-up saying, “I’m not playing the victim…sorry that I insulted Beyoncé’s daughter by suggesting that she might get plastic surgery some day, like many children of famous people do.”

Classy. This was just a big icing on the cake since, in addition to Blue Ivy, singers Ari Lenox and Teyana Taylor were compared to dogs.

🗣🗣🗣 Leave Black Girls Alone In 2020! Black features are beautiful. Black skin is beautiful. Leave Us Alone. keep your hatred to your damn self in this decade https://t.co/ZTYWlQ8IXC

Both the John Boyega and Blue Ivy incidents show how anti-Blackness plans on staying strong in 2020, and how fandom and industries perpetuate anti-Black mindsets when they decide Black people are not worthy of being protected.

(via The Daily Dot, image: Screengrab)