Oh right, this is what presidents are supposed to sound like. 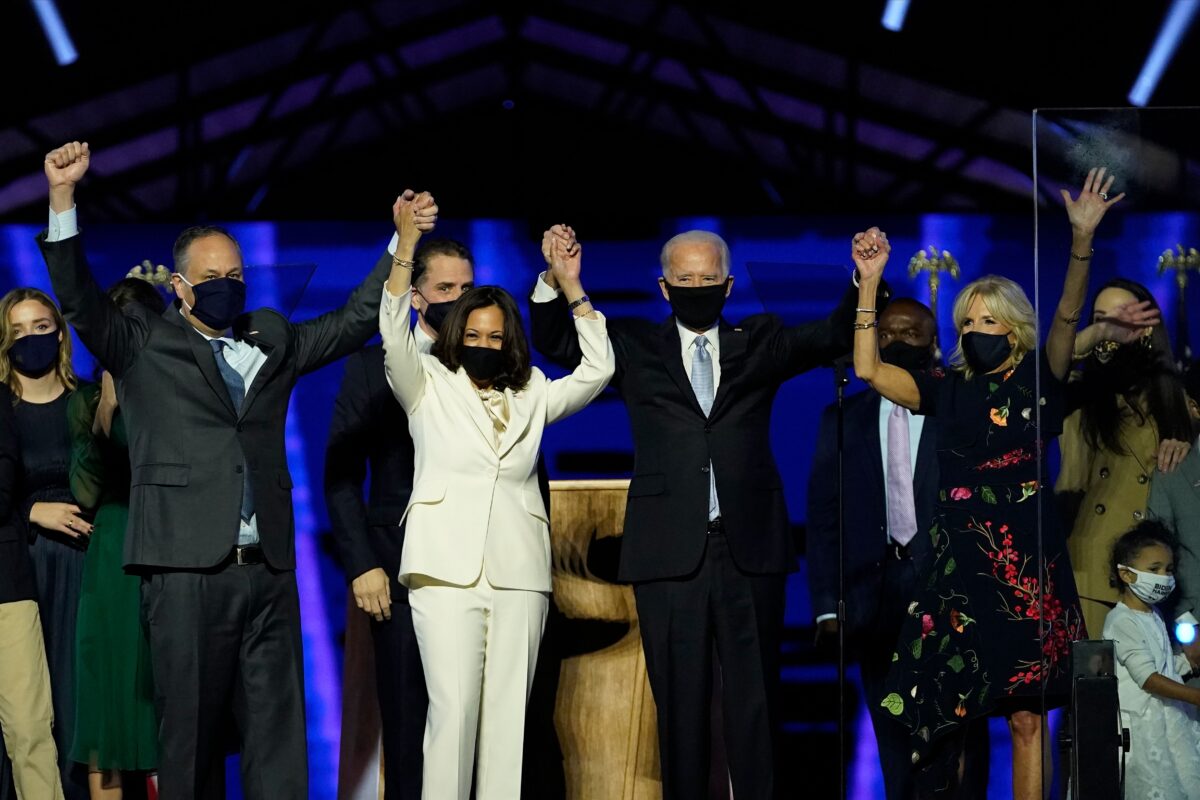 Last night, president-elect Joe Biden and vice president-elect Kamala Harris took the stage at the Chase Center in Wilmington, Delaware to address the nation. And for the first time in four years, Americans were reminded what the leaders of the free world should sound like. We’ve become so inured to Trump’s venomous language, to his incessant whining, and to his relentless lying, that to hear Harris and Biden’s plainspoken honesty was like a breath of fresh air.

Harris took the stage first, resplendent in a white suit. She told the crowd, “Now is when the real work begins. The good work. The necessary work. The essential work ― to root out systemic racism in our justice system and society, to combat the climate crisis, and to unite our country and heal the soul of our nation.” Harris also noted the historic nature of her win as the first woman, the first Black, and the first South Asian veep, saying “Black women, and Asian, white, Latina and Native American women, who throughout our nation’s history have paved the way for this moment tonight. I stand on their shoulders,” Harris said. “While I may be the first woman in this office, I will not be the last.”

VP-Elect Kamala Harris pays tribute to the women of color who “have paved the way for this moment tonight — women who fought and sacrificed so much for equality, liberty and justice for all, including the Black women who are often — too often overlooked.” https://t.co/eJ4LLajSB6 pic.twitter.com/G5fCJd56iu

Harris added, “I know times have been challenging, especially the last several months … but we have also witnessed your courage, your resilience and the generosity of your spirit,” she said. “For four years, you marched for equality and justice for our lives and for our planet — and then you voted. And you delivered a clear message. You chose hope and unity and decency and science and, yes, truth.”

Harris introduced Biden, who came jogging up to the podium in a welcome repudiation of the “sleepy Joe” moniker. “I pledge to be a president who does not seek to divide, but unify, who doesn’t see red states or blue states, only sees the United States,” he told the crowd. “The Bible tells us that to everything there is a season — a time to build, a time to reap, a time to sow. And a time to heal. This is the time to heal in America.”

Biden said that on Monday he would be meeting with his COVID-19 task force, which includes former Surgeon General Vivek Murthy, David Kessler, the former commissioner of the Food and Drug Administration, and Dr. Marcella Nunez-Smith of Yale University.

Biden added, “That plan will be built on a bedrock of science. It will be constructed out of compassion, empathy and concern, … I will spare no effort — or commitment — to turn this pandemic around.”

While Biden never mentioned Trump by name, he extended a hand across the aisle to republicans across the country. “It’s time to put away the harsh rhetoric, to lower the temperature, to see each other, to listen to each other again,” he said. “To make progress, we must stop treating our opponents as our enemy.”

Biden worked yet again to display empathy, dedicating a hymn popular among Catholics — “On Eagle’s Wings” — to the families of more than 230,000 Americans who died from the coronavirus pandemic.

Biden ended his speech doing something Trump still refuses to do: to acknowledge the nearly 250K lives lost to coronavirus. Biden quoted the “On Eagle’s Wings” hymn saying, “And He will raise you up on eagle’s wings/bear you on the breath of dawn/make you to shine like the sun/and hold you in the palm of His hand,” adding, “And now, together — on eagle’s wings — we embark on the work that God and history have called upon us to do.”

President-elect Joe Biden: "It's always been a bad bet to bet against America." #Election2020 pic.twitter.com/8xwla4Gktx

Perhaps what moved us most of all was the finale of the event, where the Biden and Harris families flooded the stage to watch the fireworks and celebrate. To see these families embrace one another, to hold their children, to display love and affection, was a bracing reminder of how bereft and cold Trump and his family are. Can you even the remember the last time you saw any of them hug one another in public? Can you remember a time when Trump and Melania held each other the way Joe and Jill Biden did?

Last night was a victory, not just for Biden and Harris, but for empathy and warmth and humanity. What an affirmation of all that is good. We have a lot of work to do, but today, we are brimming with possibility.