We're bound to see infinity at this rate 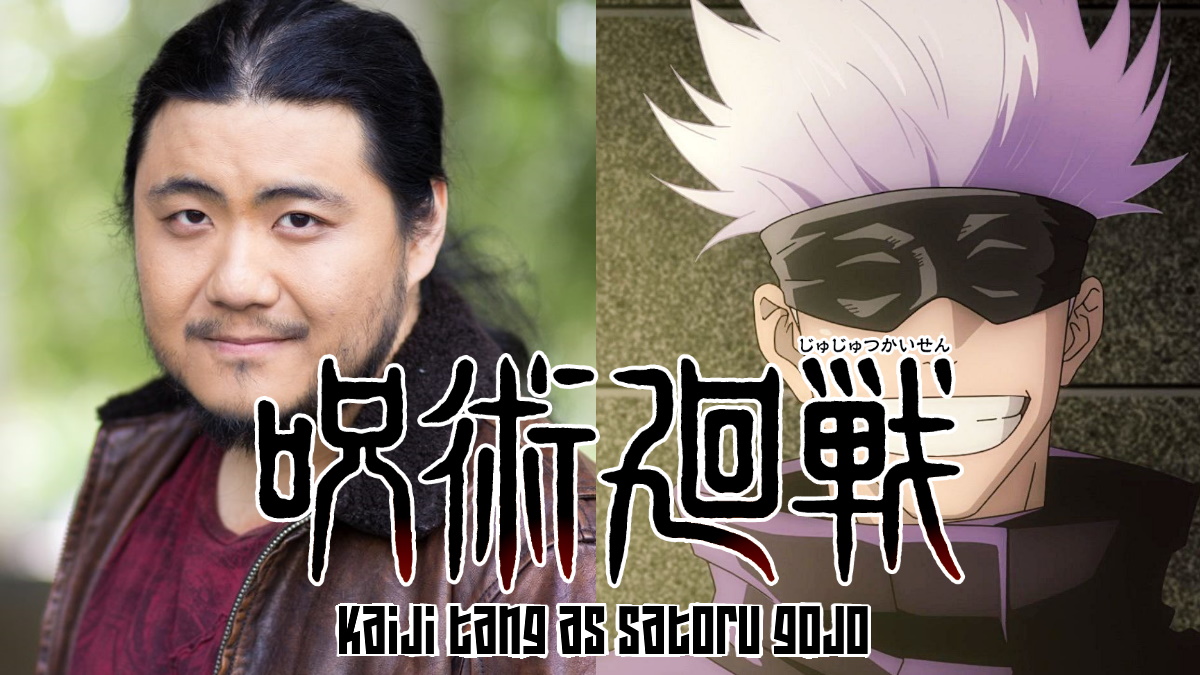 As decreed by the anime council of power, today (and every Friday for the foreseeable future) is Jujutsu Kaisen Friday. To celebrate the continuation of the first season, all the nominations in the Anime Awards, and the fact that the series kicks all sorts of cursed ass, I’ll be figuratively sitting down to chat with some of the voice actors from the dub!

I’ll be sharing the interviews over the next couple of Fridays to coincide with the episode releases. You can watch the series over at Crunchyroll.

This week I have the pleasure of chatting with Kaiji Tang, the voice of everyone’s favorite blindfolded menace, Satoru Gojo.

Kaiji’s been in the industry for quite some time while, lending his voice to several anime and video game titles. For me, personally, I remember hearing him as Persona 5’s Munehisa Iwai and going back through his portfolio to say, “Oooooh, he voiced THAT character, too?!” Yes, he is, in fact, Detective Pikachu in the 2018 video game.

Kaiji Tang: I actually started out doing theatre for the first eight years of my career! When I moved to Los Angeles, I didn’t have a set goal in mind. I just wanted to act. I wanted to get my hands on any form of acting I could. This led me through acting for both film, television, and commercials. Finally, I ended up doing a podcast for a dubbing studio and they decided to bring me in on one of the shows they were working on at the time. That was The Melancholy of Haruhi Suzumiya, which was the first anime I ever worked on. Over the next couple of years, I kept getting called back so I figured, ya know, maybe we make a run at this thing. And the rest is history.

Congratulations are in order because I see that Jujutsu Kaisen is up for a couple of awards at Crunchyroll’s Anime Awards, including Gojo being up for best boy! What makes Satoru Gojo best boy material?

Satoru Gojo is one of the trolliest trolls to ever troll anime. His best boy material all comes from his whimsical nature and the relationship he has with his students. Gojo is a joy to watch and a breath of levity in the otherwise fairly dark atmosphere of Jujutsu Kaisen. Though he’s as overpowered as they come, the caring he shows toward those he teaches and his, let’s just put it out there honestly, hilariously arrogant nature, humanizes him and makes him something more than just the power stick by which every other character in the show is measured by. Also, those eyes, am I right?

As a long time anime watcher, I feel like there’s more to Gojo than his laid back nature. Beneath that happy-go-lucky mask (or blindfold, har har) he seems to genuinely care for his students. He’s also questioned the way things are being done at the school and, arguably, is the reason why Yuji is even still alive. Is it hard playing a character who bounces from silly to “actually, I’m kinda serious right now” at the drop of a hat?

I think as long as you portray something honestly and earnestly, it isn’t hard. What you really want to focus on as an actor isn’t a character’s strongest points. Those unfold naturally in the story. What you want to focus on is a character’s weakness. And despite his hilariously overpowered abilities, Gojo has a glaring weakness; his arrogance. It pulls him down from the realm of the Gods he likes to see himself as part of and makes him very human. We have to understand that despite his genuine feelings for the well being of his students, Gojo has an ideology as rigid as the higher-ups he battles against. He’s strong, he’s intelligent, and oh so clever. But there’s an interesting lack of wisdom. And I find that lack of wisdom the most fascinating part of his character.

If you weren’t acting, what would you be doing career-wise right now?

A couple of things probably. I’d have invested way more time in competitive fighting games and would probably have been to EVO a number of times at this point. Or I would have gone into the culinary world. I’m a massive foodie and I’m passionate about how cooking and cuisine bring people from all backgrounds together at a table. Eating someone else’s food is an intimate act. It reflects their life, their culture, their history. If you want to learn about someone, eat their food and share their stories.

It’s your day off and you’ve got nothing but time, what are you doing with your day?

I’d be finding new and fun ways to troll my wife. That’s basically the whole day.

TMS: Ah. Such a Gojo thing to say.

I do a weekly series called “Monday Anime Round-up” for The Mary Sue where I talk about all the series I’m watching. What’s on your watchlist right now? Any series you’re looking forward to this year?

Oh man. I’m not going to name all of them because it’s shameful, but I’m addicted to Isekai shows whether they’re trash or not. If there’s an Isekai out right now, I’m probably at least casually watching it. I know, I know. I can feel the judgment. But I’ll have you know I also enjoy non-Isekai soul food anime like the new episodes of Is It Wrong to Try to Pick Up Girls in a Dungeon. Also, I’m sad Food Wars is done.

TMS: No judgment here! At least, not to your face.

Anything you wanna let the Jujutsu Kaisen fans (or fans of you in general) know?

It has been the honor of my life to provide voices for the projects I’ve been a part of and I am humbled by the support from the fans. I hope I can continue to provide fun for years to come.

Be sure to come back next Jujutsu Kaisen Friday for another interview!